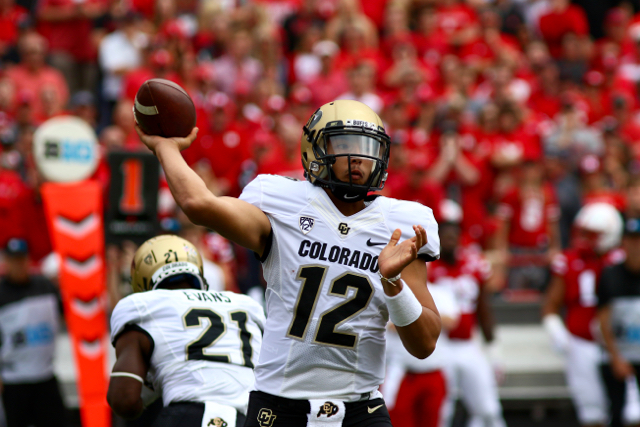 Three quarterbacks coaches in three years. That’s the reality facing redshirt senior quarterback Steven Montez, who enters his fifth and final year of eligibility at the University of Colorado, while studying under his third quarterbacks coach in as many seasons.

The 6-foot-5 gunslinger has gotten used to change. After all, the game of football is fickle, and an athlete’s ability to adapt isn’t merely encouraged — it is a requirement. As part of being the team’s starter, it is Montez’s job to be a leader; embrace the change and guide the rest of the team through the oft-overwhelming waters of changing tides.

With the firing of former head coach Mike MacIntyre back in November, most of his staff, save three, were also relieved from their contractual obligations. Among those who were let go was quarterbacks coach Kurt Roper, who also served as the program’s interim head coach during the final game of the 2018 season. The releasing of Roper was probably the most consequential for Montez, who often raved about “Rope” and how he was wholly influential in his development.

When I asked the Buffaloes’ senior passer about the changing of the guard from Roper to current hire Jay Johnson at the last spring practice before the break, Montez briefly interjected at my first mention of coach Roper.

“Huge fan,” he said, before allowing me to continue my question.

Montez then answered my inquiry about the transition from Roper to Johnson.

“Coach Johnson is a really smart coach, a very bright-minded, offensive-minded guy,” Montez said. “He’s incredibly sharp at every meeting. He’s just a great guy as well, just like Coach Rope. I love them both, I think they’re great coaches and I think [Coach Johnson] is going to get us on the right path.”

Johnson not only has to right the ship as the team’s offensive coordinator, but he also has to guide the Buffs’ quarterbacks quest through a brand new offense. Johnson, too, made mention of the influence Roper had on his new quarterback.

“I think part of it is at least developing that relationship,” Johnson said. “I know Coach Roper is a great guy, an exceptional coach. I’m just trying to hopefully build on what he’s already established, and so if we can build that camaraderie, that relationship, I think it goes a long way.”

After the extreme changing of the guard that happened at the tail-end of the 2018 season, Montez played one last game under then-interim head coach Roper. For Montez, he wasn’t sure if it’d be his last game at CU — though it did turn out to be Roper’s finale. The senior spent winter break and the start of the spring semester grappling with the decision to stay with the program or declare for the NFL draft.

He decided to stay.

In their early talks, Johnson made certain not to put ideas in his head about staying or going — he wanted it to be Montez’s decision — but made sure to lay down some of the pros and cons for the impending fifth-year quarterback.

“I don’t know if I had any input on swaying his decision, but I just know we talked and were very transparent about what we’re trying to do and how maybe that could be beneficial for him and those types of things,” Johnson said. “Ultimately, it was his decision.”

It’s a decision that Montez calls his best yet. Now whether that translates to success this season remains to be seen, and first-year success under a whole new coaching staff and playbook can be tough. So far, it’s been smooth.

“Obviously when you have transition, there’s change, but I think he’s dealt with the change pretty good,” Johnson said. “That’s always the hard part. A lot of times in football we do a lot of similar things but it’s just different languages. I think he’s starting to grasp some of that and starting to visualize and see things a little bit better. He’s making some good strides.”

That is the point of spring ball, after all. It’s an added slate of free practices five months before the actual season starts. It’s especially important when there’s an entirely new offense to learn. Every day of studying it, practicing it and perfecting it, is of the utmost importance.

According to Montez, this iteration of offense is unlike anything he’s seen under his last three coaches.

“I think this offense — the one that we’re learning now — is more different than anything we’ve done in the past,” Montez said. “But the transition from [former quarterback coach Brian] Lindgren to [former quarterback coach Kurt] Roper was more of a smoother transition because the offense — it changed a little bit but it didn’t really change very much.”

Lucky for Montez, he has coach Johnson on his side.

“Coach Johnson is really getting us through this process really smoothly and helping us learn a lot,” Montez said. “We’re picking up the playbook really quickly.”

That’s an encouraging sign, especially given the fact that there’s still plenty of time to perfect the new playbook. It’s also a testament to Johnson himself. It’s perhaps one of the reasons head coach Mel Tucker made Johnson one of his first hires when accepting the position at Colorado.

“Coach Johnson, he’s a pro,” Tucker said. “He’s been there, done that. He’s called a lot of games. He knows how to develop quarterbacks, his attention to detail is off the charts, he’s extremely organized and he gets it.”

As for what Tucker’s seen from his new coach/quarterback dynamic: so far, so good.

“They work very well together … the players, they feel that,” Tucker said. “They feed off of him. They know he’s an expert at what he does and that gives them a chance to be great. They’ve been working very well together so far.”

Montez, Johnson and the rest of the Buffaloes will continue their spring training for the coming weeks. Students and fans will get their first chance to see the new-look Buffs during the Spring Football Game at Folsom Field on Saturday, April 27 at 12 p.m. Admission is free and open to the public.