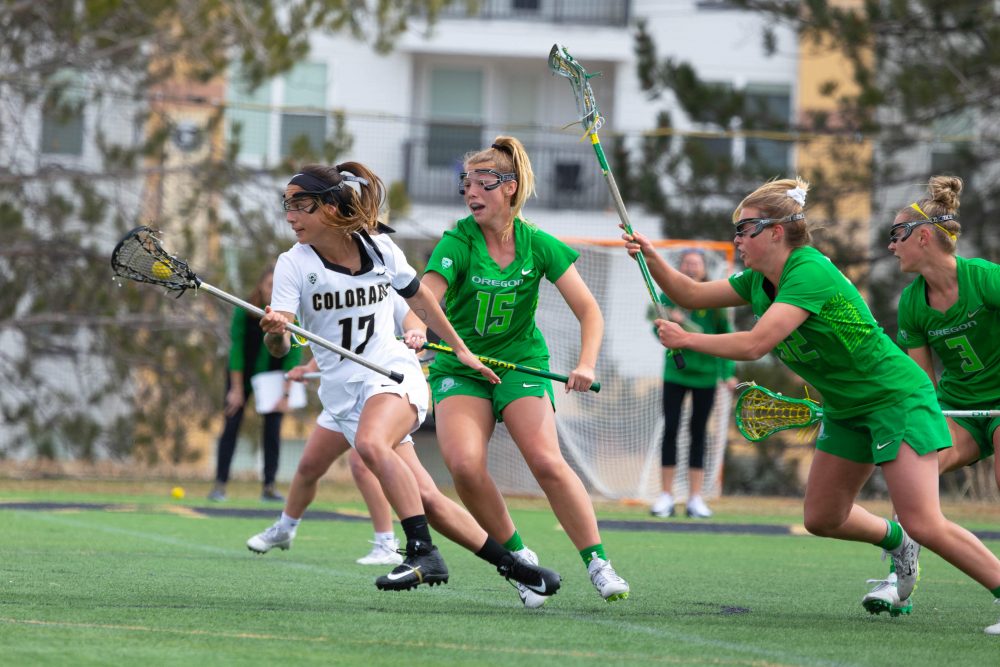 Senior attacker Miranda Stinson weaves in and out between defenders for the score. Stinson generated 5 goals and 1 assist on the day. March 23, 2019 (Kevin Wu / CU Independent)

The No. 25-ranked University of Colorado women’s lacrosse team dismantled the Oregon Ducks, 15-6 on Saturday afternoon, keeping Colorado undefeated against Oregon in all nine matches in the two teams’ series. It was Colorado’s second consecutive win, giving the Buffs a 5-4 record on the season and a 4-1 record in the Pac-12 Conference.

Coming off a big win against Arizona State, and having won three of their last four games, the Buffaloes proved to be hot coming out of the gate. Just over one minute into the game, Colorado captain and senior attacker Miranda Stinson found the back of the net.

It was clear from the start of the game that CU’s speed was going to be a major issue for the Ducks’ defense. Both Stinson and senior attacker Samantha Nemirov had at least one step on every Oregon defender. With 26:51 left in the first half, Nemirov joined the scoring and gave Colorado a quick 2-0 lead.

“I think today we came out here firing,” Nemirov said. “We wanted to play a full 60 minutes after last weekend, and I think we did that. But there is always room for improvement.”

Oregon’s Julia Taylor answered the Buffs’ early attack with 25:24 left to cut Colorado’s lead to 2-1. Sloppy defense on part of CU led to a free-position shot, which Taylor capitalized on.

Stinson immediately answered right back with 25:12 left in the half. Stinson won the draw and bee-lined right towards the goal with Ducks defenders trailing far behind, regaining the Buffs’ two-goal lead. It was 3-1 in favor of Colorado.

CU had fantastic transition defense in the first period. Three times the Buffs had fought and won back possession in the neutral zone, while Oregon was left trying to begin their attack.

“I think transition looked really [solid],” Nemirov said postgame. “I think we were moving the ball fast and supporting the ball.”

Oregon still had no answer for Colorado’s speed. After a foul in the attacking zone, CU earned a free-position shot, which freshman attacker Chloe Willard put it in and made the score 4-1 in favor of the Buffs.

Oregon was still hanging around with 16:04 left when the Ducks’ Claire Domshick scored to put Oregon within two of CU.  Again — continuing the trend from last week — CU got scored on from a pass from behind the net that traveled over the goalie’s head and into the attacking zone. In last week’s contest against ASU, the Sun Devils had most of their goals happen that way. It’s something the Buffs will have to deal with in practice.

“I think we need to do a better job playing with our feet and playing body defense,” said head coach Ann Elliot Whidden. “But at the same time, I thought they did a good job being aggressive, crashing when the ball went in the middle and trying to come up with some ground balls”

Another free-position goal for Oregon made it a 4-3 CU lead. Colorado’s defense was too physical and a little slow, resulting in a handful of free-position shots for Oregon.

Oregon goalie Rachel Hall made some stellar stops in the first period; she would end up with 14 saves when all was said and done.

Stinson got the Buffs back on track with back-to-back goals. Nemirov and senior attacker Sophie Castillo joined in the fun, too, scoring a couple of goals of their own. With three minutes left in the period, the Buffs held a substantial 8-3 lead.

“We had some lulls,” said senior defenseman and team captain Olivia Aschman. “But we came out aggressively when we needed to and put the ball in the back of the net.”

Before the end of the period, Stinson tacked on her fifth of the day to increase Colorado’s lead to 9-3, increasing the Buffs’ total shots in the first period to a whopping 26.

A few minutes later, Colorado scored back-to-back goals, first by freshman attacker Chloe Willard, and then subsequently adding one from Castillo, which pushed Colorado’s lead to 11-4.

Both teams then began to trade goals over the next fifteen minutes, with CU’s Nemirov scoring her third of the day and then sophomore midfielder Sadie Grozier scoring a pair of her own. For the Ducks, it was Lindsey White and Shannon Williams putting the balls in the back of the net.

It was all Colorado down the stretch, controlling the ball well and not letting Oregon get any more offensive chances.

“I think as soon as that whistle went off, our focus right now is on [the University of Denver],” said Nemirov. “We’re just going to watch film and get going.”

“For us, in this second half of our season, we got to find some consistency and confidence. We are a very talented team with a lot of potential,” she said. “If we can come every day and play with the same confidence and composure, then we are a top team. If not, then any given day anything can happen.”

The Buffs will wrap up their four-game homestand against the Denver Pioneers on Tuesday, March 26 at 4 p.m. MST. 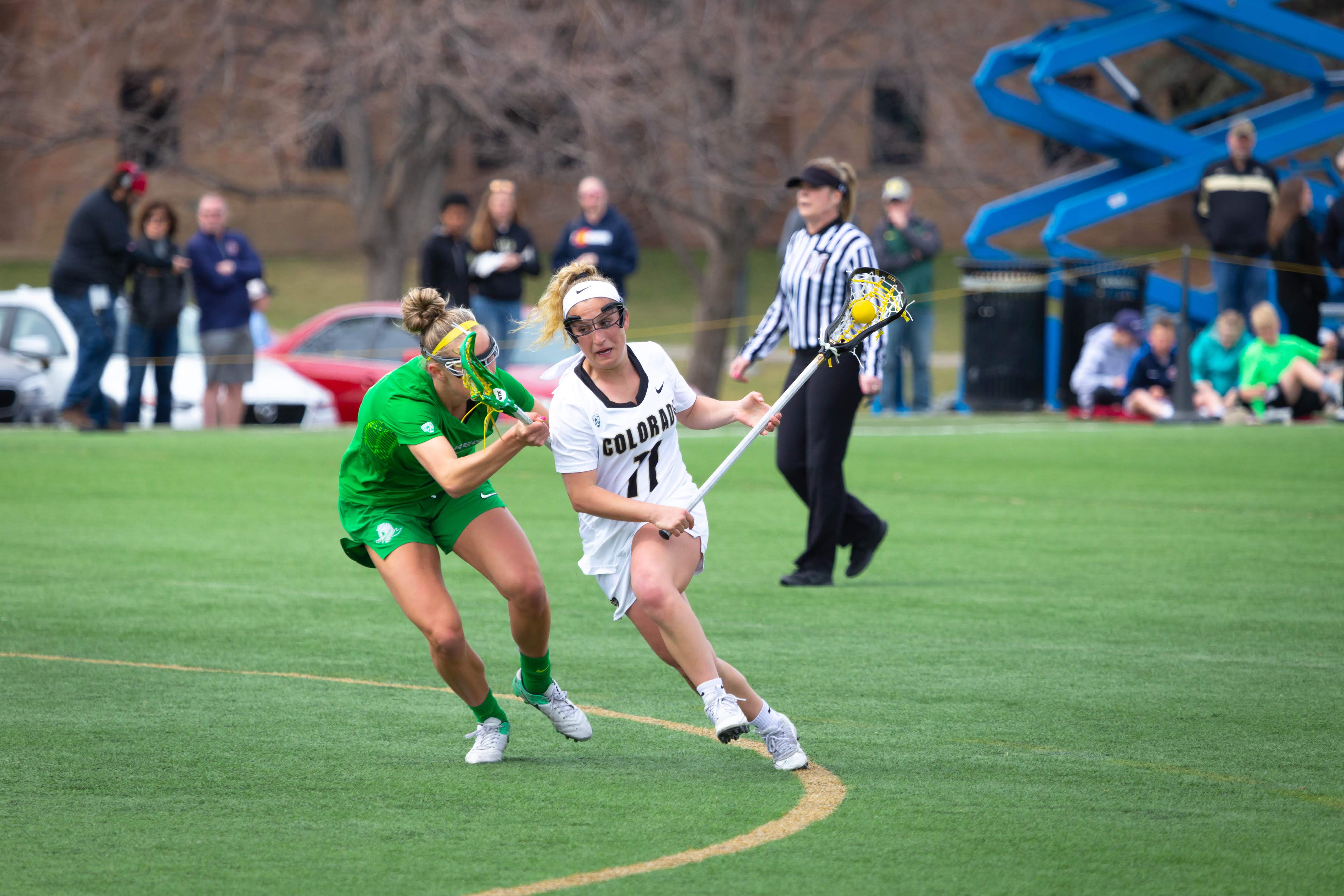 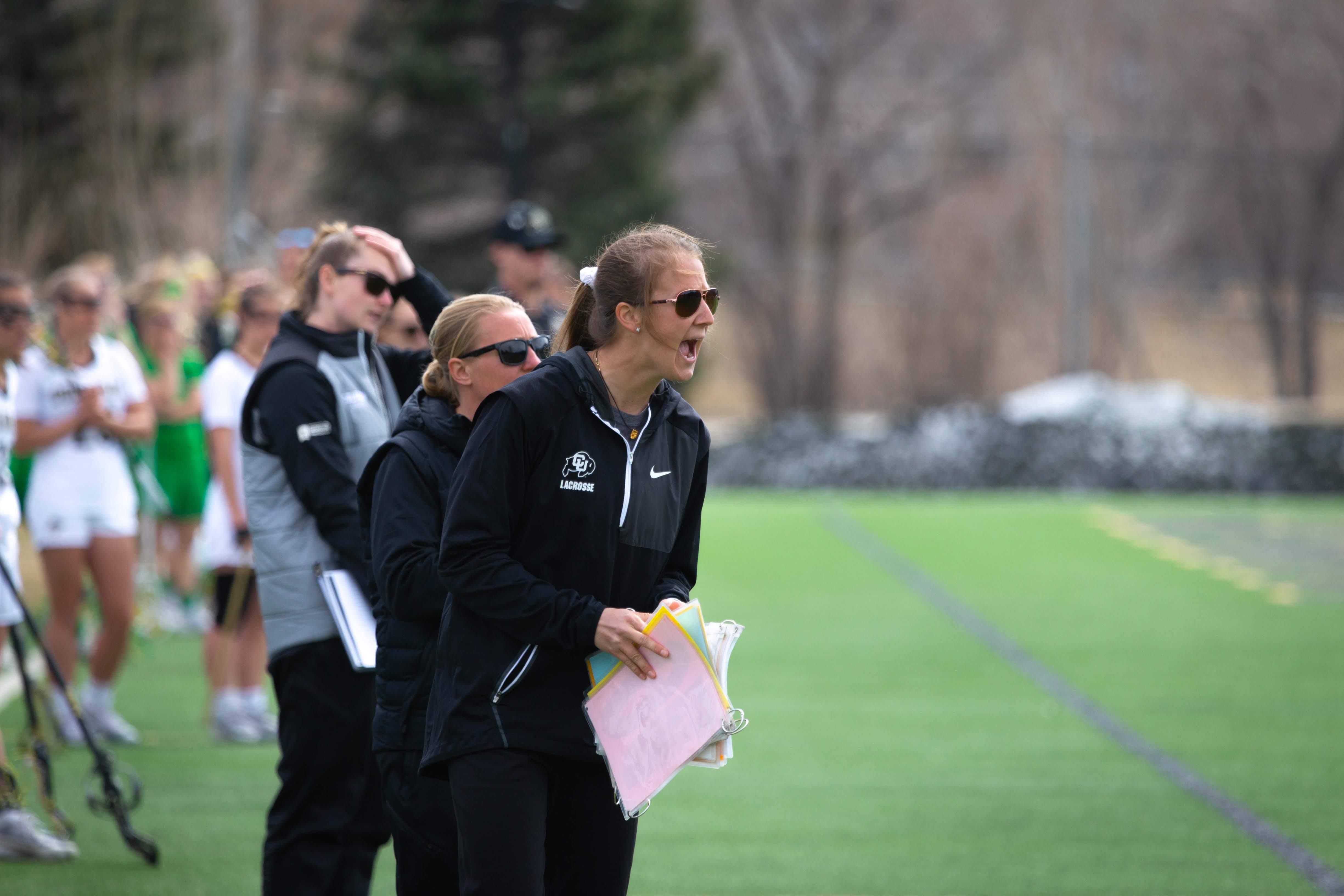 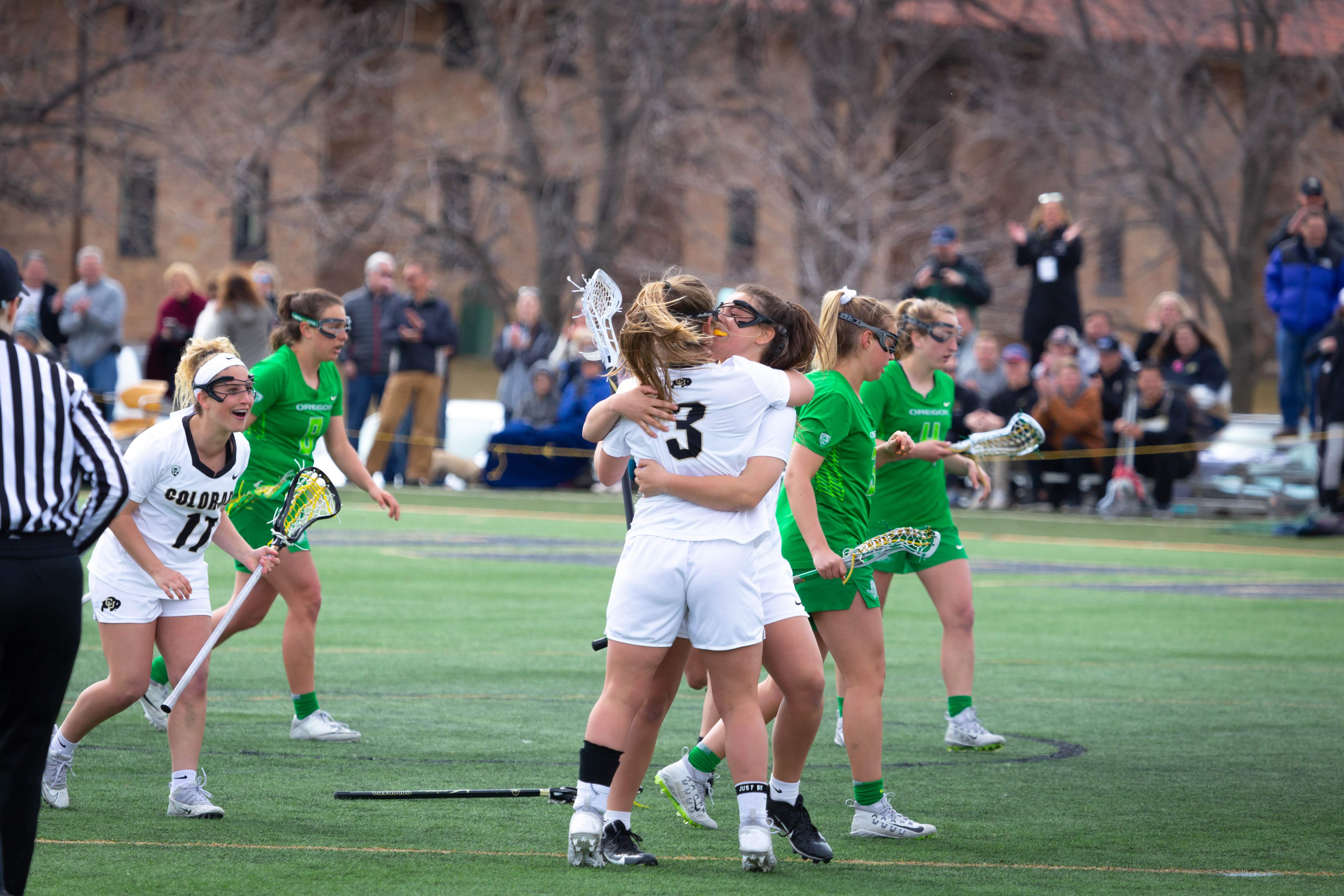 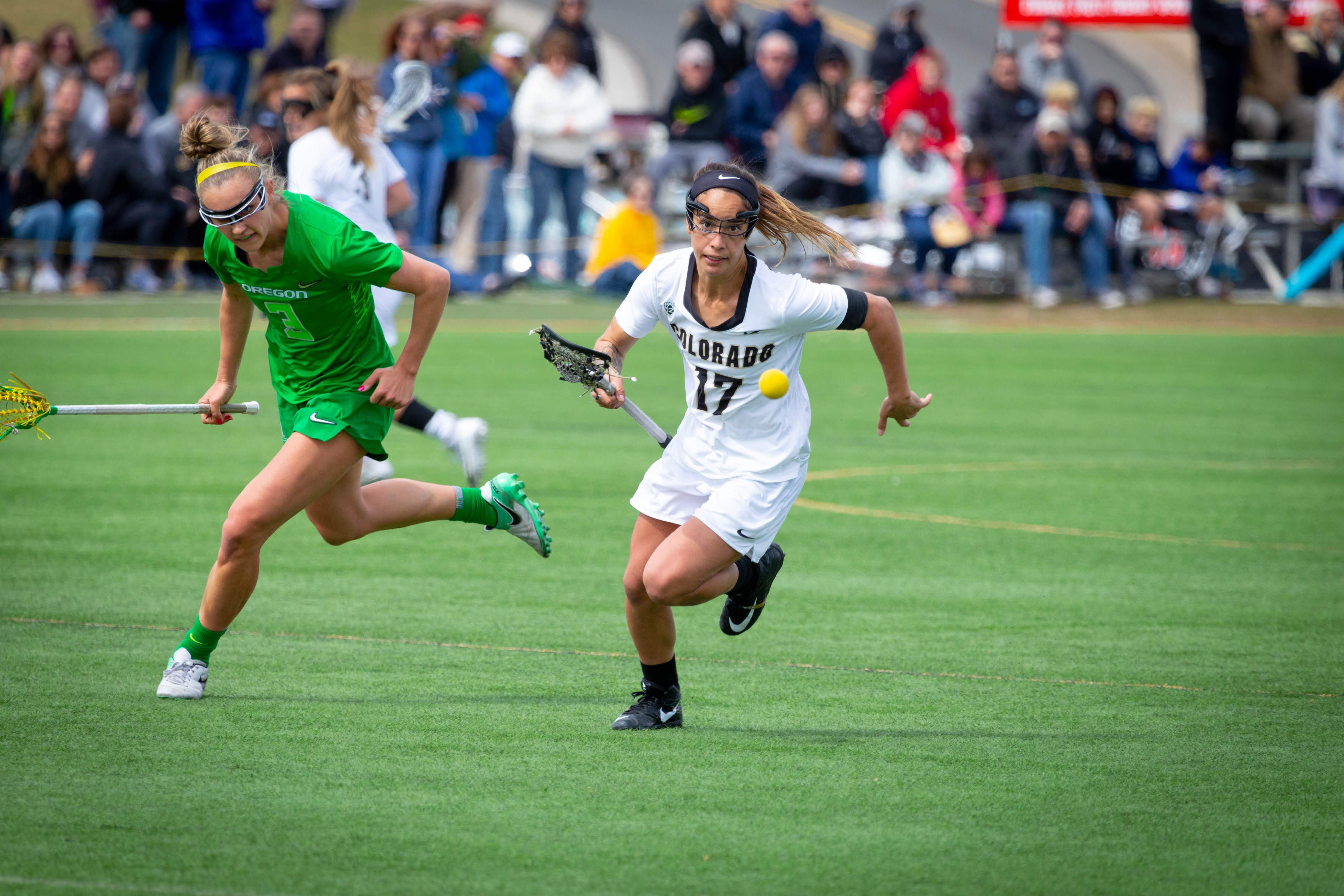 Senior Miranda Stinson makes a rush for the ball in order to get to it first. March 23, 2019 (Kevin Wu / CU Independent) 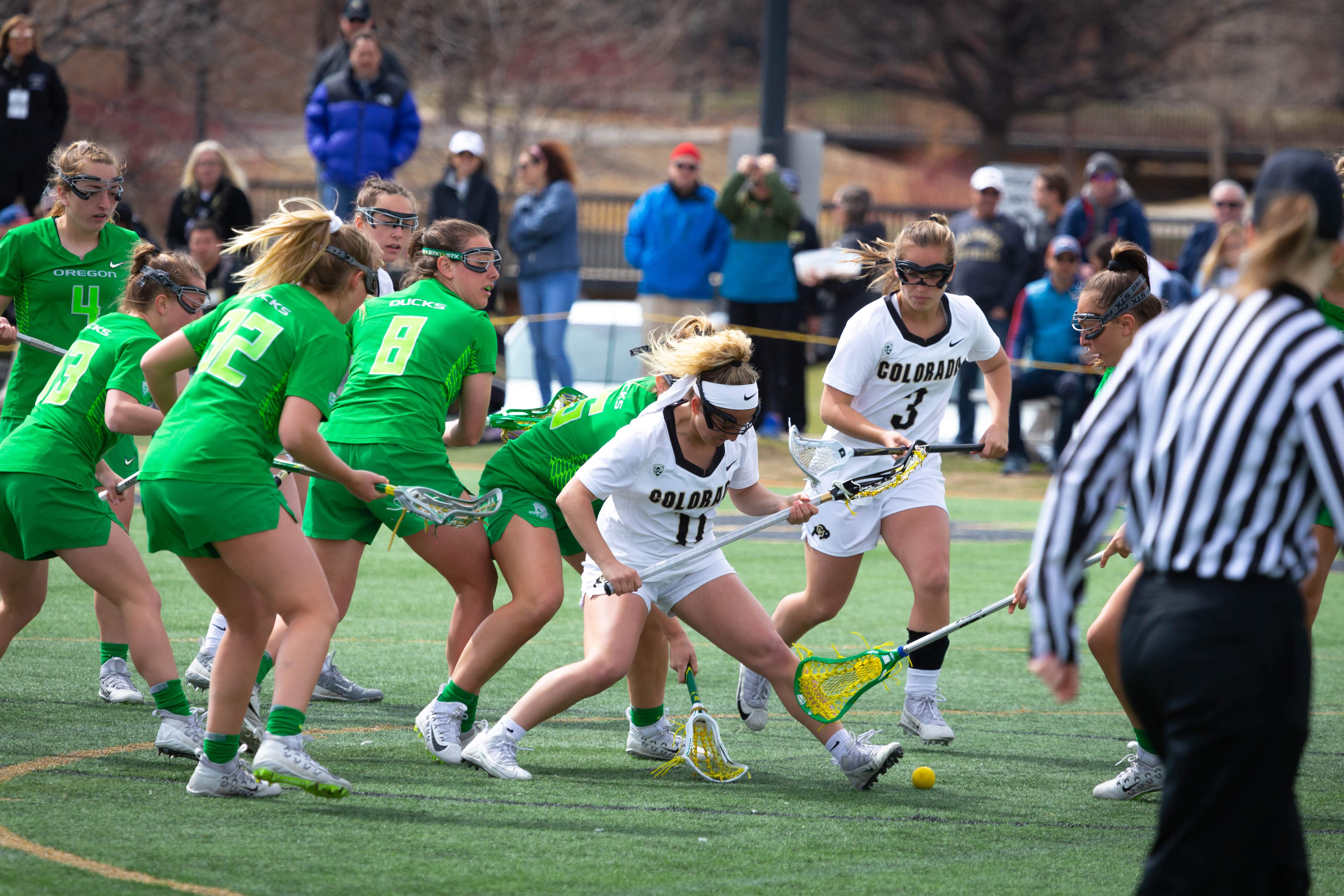