Students learn to ‘decolonize their diet’ during interactive workshop 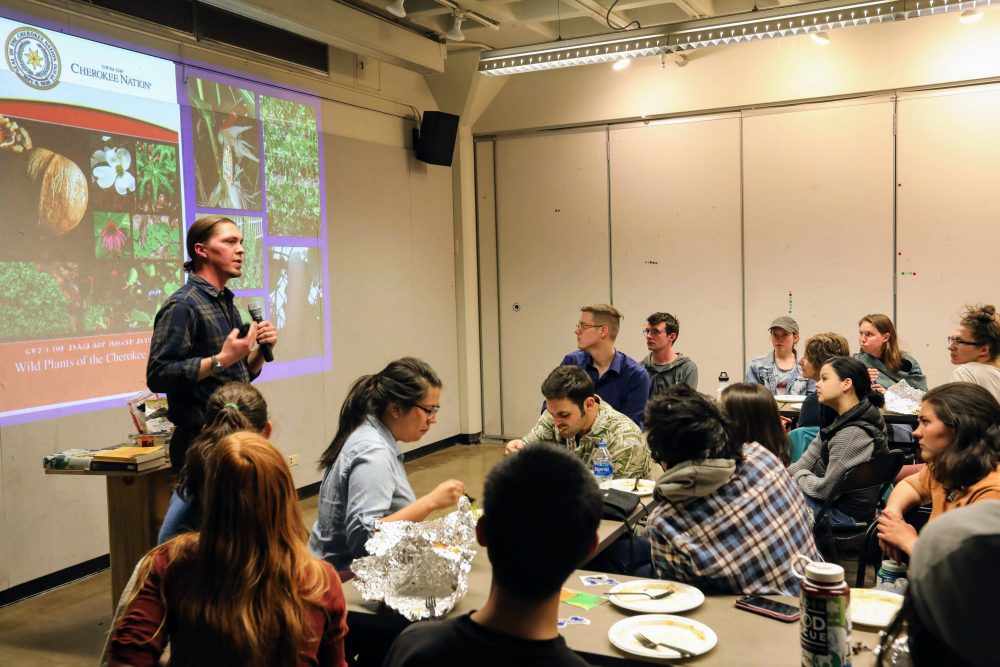 Around 40 students filled a room in the Environmental Design building on Thursday night to learn how to “decolonize their diet.” The event is part of Environmental Justice Week 2019 on the University of Colorado, Boulder campus. Just earlier this week, the first of these events explored racism in environmental policies.

Adi Sadeh, a student and member of CU’s Eco-Social justice team, says the event was done in the hopes of sparking student conversation around the issues that marginalized communities face in regards to environmental procedures.

“Colonialism has played a big part in food oppression with indigenous nations, specifically in the U.S.,” Sadeh said.

The event was catered by Tocabe, a local Denver based Native American restaurant, and included a feast of fry bread, bison, wild rice, Osage hominy, sweet corn, and ancho chipotle.

With their stomachs full, students listened to Assistant Professor of Ethnic Studies Clint Caroll speak about his experience re-indigenizing his diet. As a member of the Cherokee nation, he told students of the importance of understanding the relationship food plays with his people.

Following this was an interactive discussion, kicked off by Energy and Climate Justice Manager for CU’s Environmental Center, Michelle Gabrieloff.

“What does colonization mean?,” Gabrieloff asked.

“Erasure”, reductionism”, theft” and “monoculture” were just some of students’ responses.

Gabrieloff referred to colonization as a “force of extraction and taking resources and a mentality that has no room for complexity.”

The task for the night was to dismantle the colonization of food that took place in the 18th and 19th centuries and to prompt students to return to their “roots.”

A map of the world was drawn out on the floor after which students were asked to stand where they were born. Following this, students then stood where their mothers, grandmothers and even their great grandmothers were born, culminating in some students standing in areas that went seven generations back on their fathers side. The further in ancestry they went back, the more dispersed around the world the participants became and the less they knew about the food of their ancestors.

Hoping that the curios activity may connect students more with their ancestors, Gabrieloff explained, “We all come from somewhere, and food is an integral part of that culture.”

In modern day, human’s disconnect from food and the environment has given humanity a debauched sense of ownership, Gabrieloff said.

“We have started to think land, water and the DNA of seeds belongs to us when in fact we belong to our food,” Gabrieloff said.

Gabrieloff pointed out that humans have a special relationship with nature, a connection that, when it is conciseness, is a positive one. She gave the example of black walnuts that are doing better in areas where people are harvesting them.

“If we think we are only bad in nature, I don’t know how we are going to succeed in combating something like climate change,” Gabrieloff said.

Gabrieloff calls privatization the “ultimate colonization of food.” Diversity of plants is needed for different areas, for wet or dry seasons. Squash, beans and corn are referred to by indigenous peoples as the “three sisters” because of how well they grow together, according to Gabrieloff. Yet, through the production of genetically modified organisms, colonization has created a “monoculture,” wherein a single crop is produced in a given area.

Teyanna Norris, a student who helped plan the event, is Haitian, Japanese and Native American. She says her family eats nothing from her ancestry and is excited to learn more about the food she descends from.

“I want to go back and see what I can do to incorporate more things that are natural to who I am,” Norris said.

For Sadeh, whose mom immigrated to the U.S. from Israel, she feels she grew up in a very American way.

“I have been really disconnected from my heritage, especially my food at part of that culture my whole life,” Sadeh said. “This event has inspired me to look into that.”

Alex Honnold highlights his expeditions at sold out Mackey...