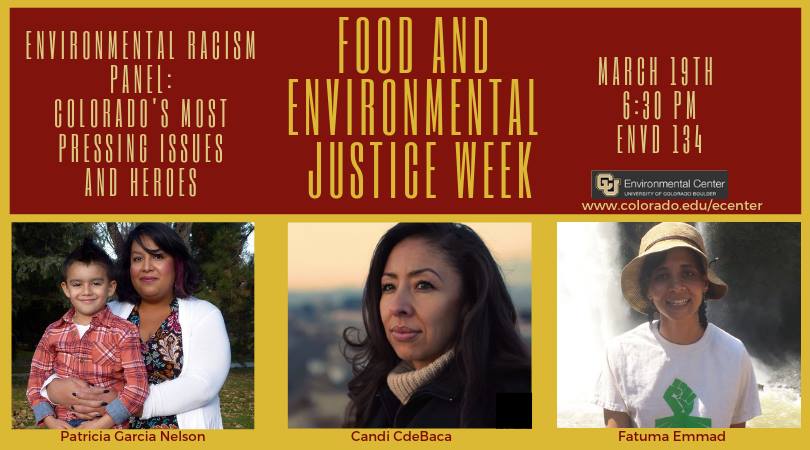 Personal stories of racism in environmental projects were discussed during a lecture on the University of Colorado Boulder campus Tuesday evening entitled “Environmental Racism: The Most Pressing Issues and Heroes in Colorado.” The lecture is the first of two events for Environmental Justice Week at CU.

The effects of policies on marginalized communities was the core of much of the discussion from speakers. Fatuma Emmad explained how for some, environmental racism has made it hard to acquire necessities such as basic health care. A former professor at Regis University, Emmad’s research focuses on the issue of “food apartheid,” a gap where minorities have far less access to grocery stores than others.

“Farming in the United States is enmeshed with both racism and capitalism in a way that has a profound impact on who owns and who accesses land,” Emmad said.

Emmad explained that over half of those who work on farms are usually undocumented, creating a gap that is a fundamental problem within the industry and expands into the selling of the products.

This race gap is a historical trend within the United States, according to Emmad. While America use to employ slave labor, for Emmad this has turned to “underpaid labor.”

Emmad promotes food safety through the grassroots organization Frontline Farmers, which aims to solve the food apartheid within Denver and surrounding areas.

But some advocates are fighting to change enviornmental racial inequity. Candi CdeBaca, a candidate for city council in Denver and former teaching assistant at the University of Denver, has strong family ties to Colorado, being a fifth-generation resident.

CdeBaca’s launch to advocacy started at DU, when she noticed some of her students became worried that marijuana businesses that were buying land to grow and the construction of new highways were forcing many people out of residential areas. CdeBaca’s students feared that they may be forced to vacate their homes at any time.

CdeBaca says residents of low-income areas are being taken advantage due to racism. Their communities do not create a large amount of income, leaving their landlords to easily sell their properties to companies offering larger amounts of money, according to CdeBaca.

A highway is legally supposed to be 500 feet away from elementary schools in other states. Currently, however, the Colorado government is allowing for a highway to be built directly next to the elementary school in CdeBaca ’s community.

CdeBaca was not the only one who shared the personal stake she has in activism. Patricia Garcia Nelson, an anti-fracking advocate, shared her own personal connection to how the fracking industry has effected her.

While her son was a student at Bella Romero Elementary in Greeley, an oil company chose to frack within half a mile from the school. Weld County, where Greeley is located holds over 40 percent of the oil wells in Colorado.

This came after the company had attempted to frack near Frontier Academy in Greeley, but faced pushback from community members. The company then set it sights on the predominantly latinx community of Bella Romero, which to Nelson, gave the company the ability to take advantage of local residents who did not speak fluent English and thus were unable to retaliate effectively.

In 2017, Nelson signed on to be a parent representative of the school in a lawsuit against the fracking company. Other parents refused to join in fear of being even more marginalized, according to Nelson, many of whom were worried about coming forward because of their immigration status.

“It is very difficult to realize the grip this has on our community,” Nelson said. “This industry is paving through marginalized communities.”

Soon after the fracking started near Bella Romero, the school started practicing evacuation drills should the site leak.

“My son asked me if something happened to the school would he and his friends be ok,” Nelson said. “I did not know what to say.”