Daylen Kountz continues to ‘grow up’ for Tad Boyle’s Buffaloes 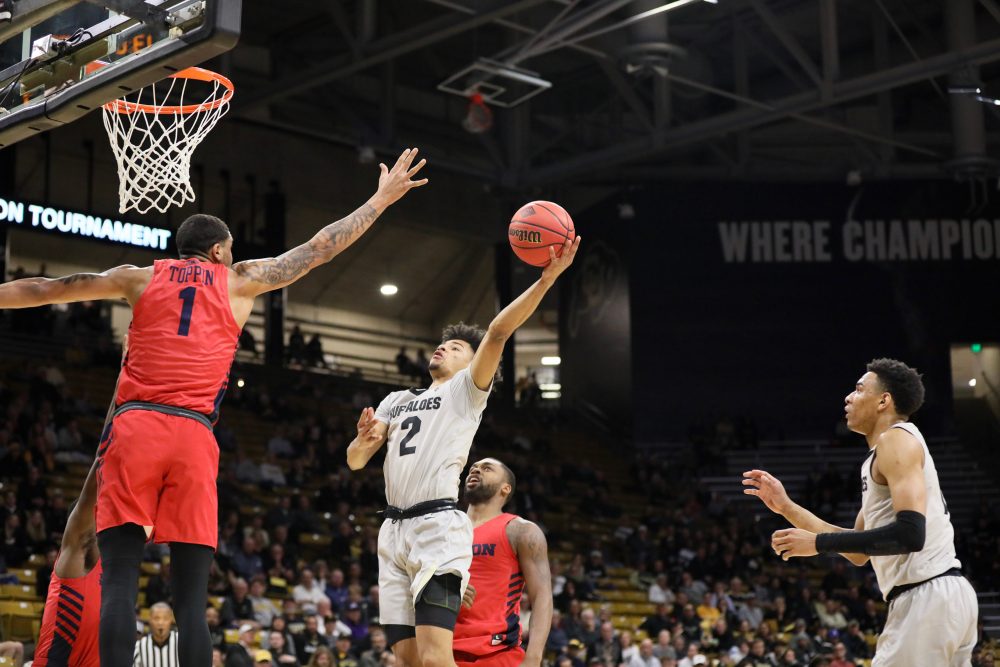 Freshman guard Daylen Kountz elevates the ball toward the basket during the first half of play at the CU Events Center. March 19, 2019 (Nigel Amstock/CU Independent)

Heading into the 2018-19 season, and as the Colorado Buffaloes’ campaign got underway, freshman guard Daylen Kountz’s ability to become acclimated to playing basketball in college appeared questionable at times.

A local kid, Kountz graduated from Denver East High School in 2018, averaging just over 23 points per game for the Angels, who posted a 21-4 record during his senior year.

Many incoming freshmen take time to make a smooth transition from high school to collegiate basketball, and Kountz was no exception.

But from day one of the season to now, the jump in overall ability that Kountz has put on display for head coach Tad Boyle has been impressive. A big part of that has come from practicing more efficiently.

“Early in the season, [he’d have] that blank look — you weren’t sure if he really was sure of what we were talking about,” Boyle said. “…[But now] you can see when we go through our plays, and on scout team, he’s understanding now what we’re talking about in our terminology.”

With junior guard Deleon Brown having been sidelined in January after being ruled academically ineligible for the Spring 2019 semester, and as fellow freshman Eli Parquet’s minutes disappeared due to a knee injury he suffered in early March, much responsibility has fallen on the shoulders of Kountz, who’s been thrown into the fire more and more as the season’s progressed.

“I think I’ve improved a lot,” Kountz said. “With things happening to teammates and me having to play sooner than expected, that helped me out early in the season. Now that I’ve been through it and know what’s going to happen and am ready for the situations… [it] helped me improve a lot.”

As Pac-12 Conference play got underway, Kountz started to build trust with Boyle and earn more minutes on the court. Beginning with a homestand against the Washington schools in late January, Kountz enjoyed a nice stretch of four straight games that saw him on the court for at least 23 minutes.

Kountz has seen a steady increase in minutes per game since the start of the year. After averaging 16.7 for the entire regular season, he saw 19.8 during Pac-12 games, and now, in CU’s four postseason games (the Pac-12 Tourney and the Buffs’ NIT win over Dayton), Kountz is up to 20.3 minutes per game.

It’s been his postseason efforts that have really been showcasing his development.

In Colorado’s victory against Cal in the opening round of the Pac-12 Tourney, Kountz had an electric sequence late in the first half.

The Buffs were up, 19-14, with 6:08 left before halftime. At that point, Kountz had subbed in and had been on the court for just 23 seconds. From there, he wasted no time forcing back to back steals, first from Cal’s Connor Vanover and next from the Bears’ Grant Anticevich, in doing so finding himself alone with the ball on a fast break opportunity both times.

Both steals resulted in emphatic dunks by Kountz, which he managed in the span of just 22 seconds. The chance to expand on those skills was a big reason Kountz came to CU in the first place over other suitors such as Nebraska, Colorado State and Wyoming.

“I thought the program fit the way I played pretty well,” Kountz said. “I like to play up and down [in transition] so I think that fit my game a lot.”

Kountz finished that game with eight points scored through 18 minutes on the court.

Freshman guard Daylen Kountz throws down a dunk against the Oregon State Beavers during the quarter-final round of the Pac-12 Tournament at T-Mobile Arena. March 14, 2019 (Nigel Amstock/CU Independent File)

In the Pac-12 Conference Tournament quarterfinals versus Oregon State, Kountz did it again, stealing the ball from OSU’s Ethan Thompson and capped the good defensive effort with another impressive dunk at the 9:51 mark of the first half.

That basket would be the only points Kountz registered in the game, but his efforts impressed Boyle nonetheless.

“We’ve got great depth on this team, and we’ve got quality depth,” the Buffs’ head coach said after the OSU win. “Daylen Kountz has had, for a freshman, two games in a row, really big-time minutes in big-time games.”

It was during the semifinals against Washington that Kountz got a chance to show off his defensive perimeter skills, as for a good chunk of the game, he was entrusted with defending Huskies’ senior point guard David Crisp.

While that game ended 66-61 in favor of UW and Kountz finished with only five points, Kountz put in good work in areas that don’t show up on the stat sheet — namely, transitional and perimeter defense.

“Defensively, I think Daylen’s making some tremendous strides as well, which is the biggest challenge for any freshman in college going to the highest level of Division I basketball,” Boyle said. “He’s had his struggles and he’s really learned.”

During Tuesday’s 78-73 NIT win over Dayton, Kountz had another nice play, driving to the hoop and making an awkward layup to give the Buffs a 13-11 lead about midway through the first half.

Kountz saw 26 minutes of action in that game and ended the night with six points.

“I like the fact that Daylen is somewhat fearless on offense,” Boyle said after Monday’s practice. “He’s not afraid to make mistakes [and] he doesn’t get his head down when he does. He’s growing up.”

Boyle and the Buffs will hope that growth continues at the rate that coaches and players alike have witnessed. Kountz will look to continue to provide his teammates with impactful performances in round two of the 2019 NIT Tournament.

Colorado will face Norfolk State at the CU Events Center in its final home game of the season on Monday, March 25 at 7 p.m. MST. 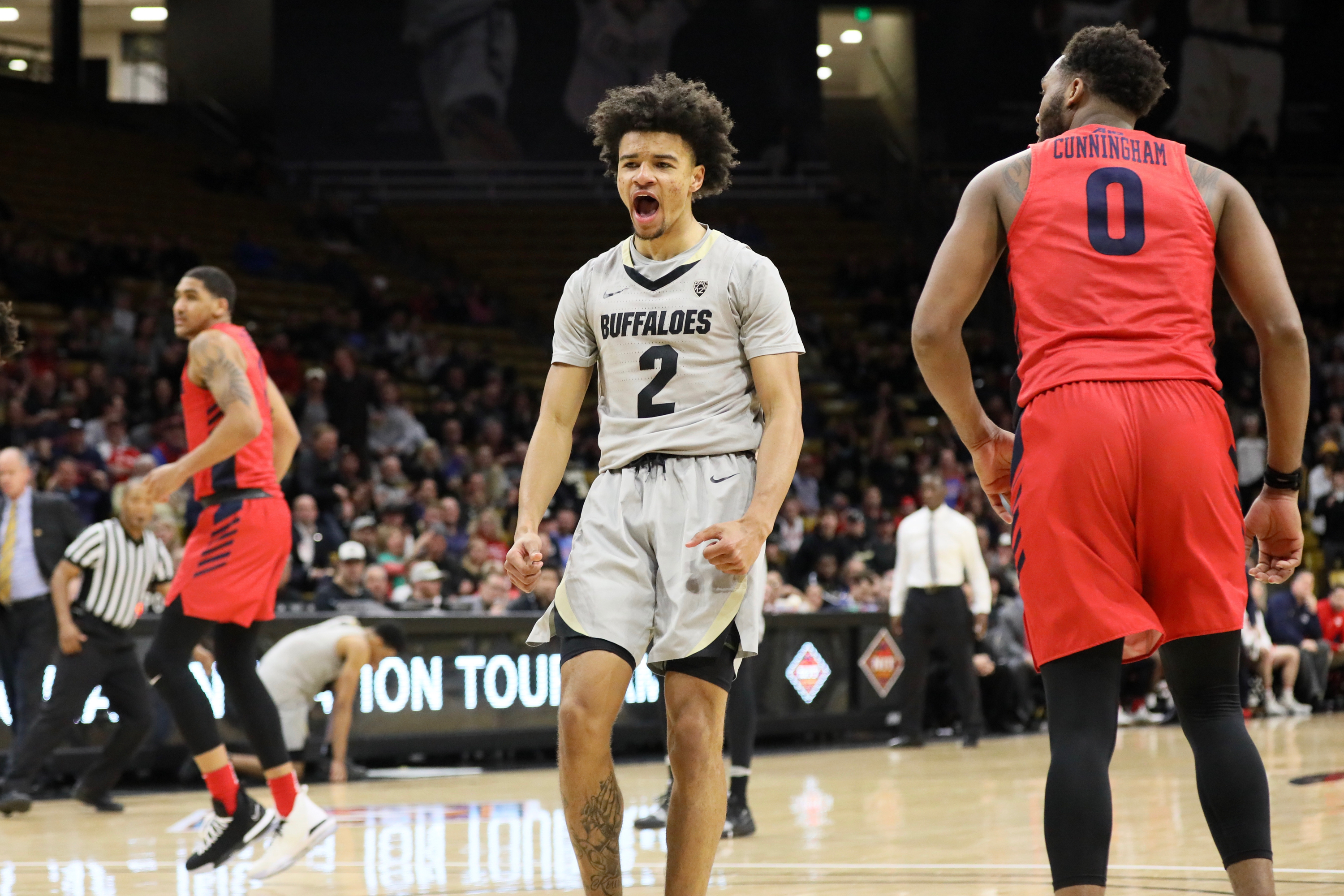 Freshman guard Daylen Kountz reacts after throwing down a dunk during the second half of play at the CU Events Center. March 19, 2019 (Nigel Amstock/CU Independent)