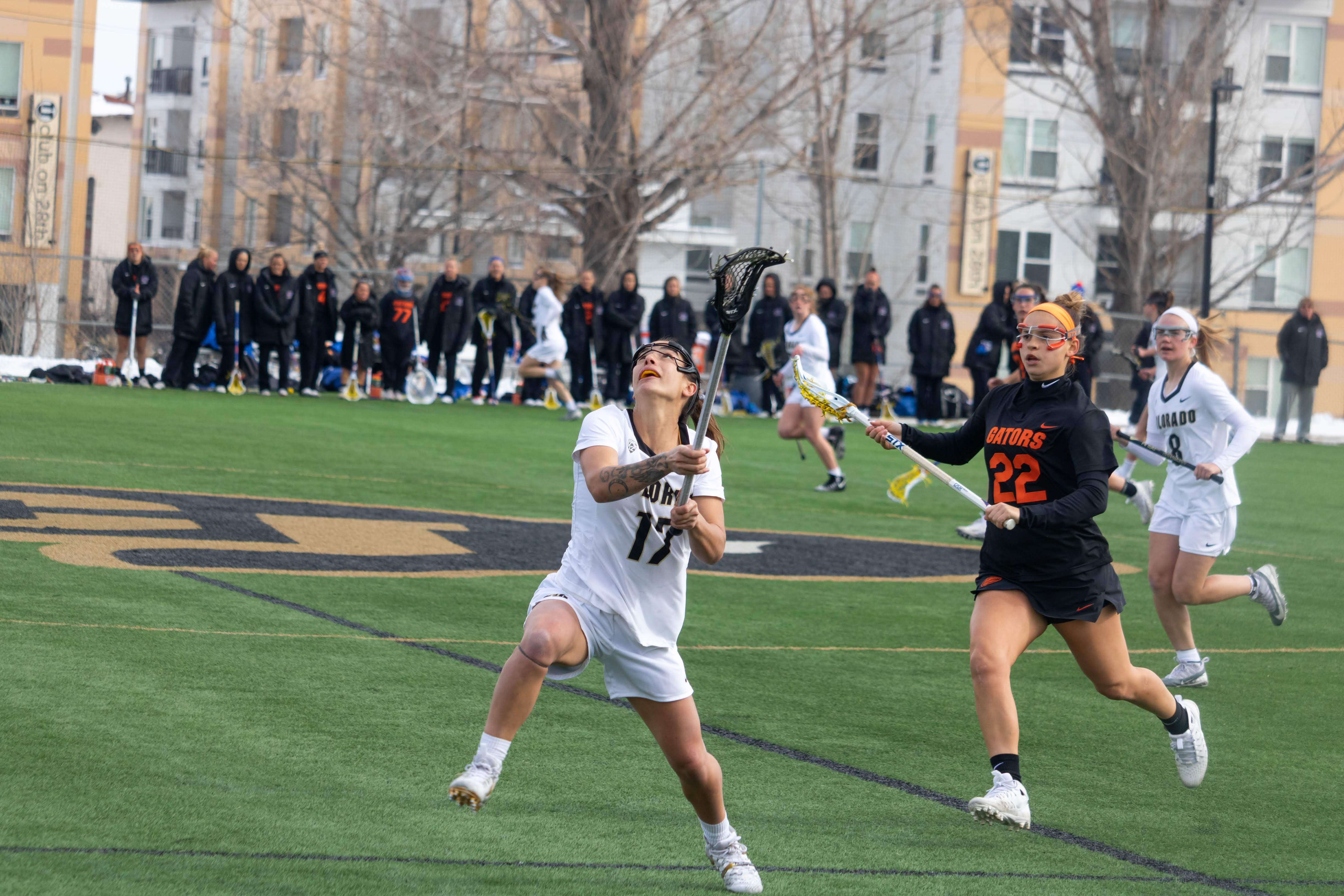 Senior Miranda Stinson eyes the ball in an attempt to come down with it first. Feb. 9, 2019 (Kevin Wu / CU Independent File)

Following an 11-5 loss to the USC Trojans on Saturday, the Colorado Buffaloes women’s lacrosse team fell to 3-4 on the season. All four losses have been at Kittredge Field, home of the Buffs.

The game against the Trojans was the first of an important four-game homestand for the Buffs, and now after losing the first in disappointing fashion, they’ll need to quickly turn it around for Sunday afternoon’s game against the Arizona State Sun Devils.

Colorado’s performance against USC was a bit shocking considering its impressive road trip the previous weekend, where the Buffaloes beat both Stanford and Cal in convincing fashion. Colorado head coach Ann Elliott Whidden, pointed to her players’ effort to explain the loss.

“Our team got an extra day to rest. We weren’t traveling, we were the team here and we were ready to go and just didn’t show up,” Whidden said following the loss to USC on Saturday. “What’s the difference between last weekend and this weekend? It’s effort and it’s attitude, and we didn’t have it today and it’s unacceptable.”

Despite being tied for the best conference record, CU is the only team in the Pac-12 that has yet to win a game at home. Considering that the Buffs were a perfect 8-0 in Boulder last season, the start to year has been puzzling. Outside of poor effort, Whidden was still unsure why her team hasn’t played well at the comfortable confines of its home field.

“We have to figure out what the difference is between playing on the road and playing at home,” Whidden said. “Because we’re 0-4 at home and 3-0 on the road. Probably the only team in the country.”

Due to the snowstorm that hit Colorado earlier in week, the game against the Trojans was moved from Friday evening to Saturday afternoon. While a change in the schedule has some advantages, such as giving the team an extra day of rest, it’s now also serves as a  disadvantage because the Buffs only have a little over 24 hours to prepare for an ASU team, which will pay CU a visit on Sunday evening.

The Sun Devils are currently sitting fourth in the conference with a 3-3 record, and are hot riding into Boulder. ASU is coming off a solid win over Oregon, beating the Ducks by a score of 18-10. Just like Colorado, Arizona state is undefeated on the road and should be unfazed going into enemy territory.

“At the end of the day it’s not about x’s and o’s. We know Arizona State, we watched their game [on Friday] against Oregon,” Whidden said of the Buffs’ preparation for ASU. “They’re a confident team, they’re aggressive, they’re athletic, they play very hard.”

While the Buffs haven’t been consistent to start this season, they’ve been able to rely on senior attacker Miranda Stinson. After being named Pac-12’s offensive player of the week, after her combined 12 points in two games, she continued to carry the team by scoring three of CU’s five goals against Southern California. If Colorado is going to improve at home this season, its likely going to have to keep counting on Stinson.

The Buffaloes will need every bit of Stinson’s potent offense, and the rest of the roster’s for that matter, if it hopes to get past ASU’s impressive goalkeeper, Berkeley Bonneau.

Bonneau leads the entire Pac-12 in fewest goals allowed with just 62 through six games. The Sun Devils’ redshirt freshman goalkeep also owns the conference’s second-best goals-against average at 10.33 per game and she’s tied for the Pac-12’s third-best save percentage at 48.8 percent.

If the Buffaloes can get a few past Bonneau, they’ll likely have a good chance of beating ASU and its struggling offense. The Sun Devils have the conference’s worst offense through the early part of this season, boasting the Pac-12’s fewest goals-scored with 69 in six games.

It’s worth noting, however, that ASU makes its shots count in its offense. The team scores on a conference-leading 80.4 percent of its shots.

CU went 14-6 last season and the team knows that they have the talent to be a contender in the conference again. With their next three games at home, the Buffs have plenty of chances to steer the ship back in the right direction.

“We have to come out willing to play hard. We have a lot of talent on this team, but we’re not using it,” Whidden said of the state of the team. “We’re just sitting back and watching other teams play when we’re here. So, for us to win it’s about effort. If we care tomorrow and show up, be the aggressive team we were last week, we’ll be successful. If we’re not, then we’re not going to be.”

The Buffs will attempt to win their first home game of the season on Sunday. The game kicks off at 1 p.m. MST at Kittredge Field.