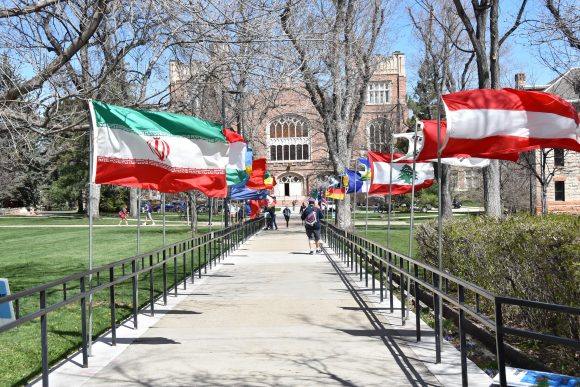 Update 3/19/19: this story has been updated to include a statement from Hope Solo’s representatives.

The Conference on World Affairs (CWA) has announced its list of speakers for the 2019 conference in April, and is introducing a new schedule.

The CWA is a forum facilitated by CU Boulder promoting discussions surrounding global issues and movements. Its prime event is CWA Week, where over 100 panelists and speakers discuss current events. This year’s CWA Week will be from Tuesday, April 9 to Saturday, April 14 and is free to students and the general public. The conference is shifting this year from a Monday-Friday schedule to Tuesday-Saturday in order to be more accessible.

CWA Week was founded in 1948 as a way to bring notable people from around the world to Boulder in a pre-internet era. Past attendees have included Eleanor Roosevelt, Studs Terkel, Roger Ebert and Ralph Nader. In the digital age it has evolved, and now takes advantage of technology to widen its reach to people who cannot attend the conference in person (many panels are livestreamed and uploaded to the CWA website). One requirement that remains from the beginning is that speakers are required to be from out of Colorado.

This year, there will be more than 100 speakers representing 19 countries. The conference is structured by putting speakers in different permutations for panel discussions on a range of topics. The panels this year will be focused around the themes of “Women & Girls Changing the World,” “Disruptive Technology” and “Design for Connection: Breaking the Bubble.” Panels are open to students and non-students, but students get priority for asking questions of panelists.

Among the speakers selected is Mike Reiss, who has been a writer for the cartoon series The Simpsons since its 1989 premiere and a four-time Emmy winner. He has recently released his book Springfield Confidential — Jokes, Secrets and Outright Lies from a Lifetime Writing for The Simpsons, which provides an in-depth, anecdotal, behind-the-scenes look at the making of The Simpsons.

“Mike’s freewheeling, irreverent comic style is incredibly engaging and we think he’ll be a hit with students and the Boulder community audience,” said Sharon Nehls, CWA co-chair of the film committee, who selected Reiss to speak.

The committee also selected Reiss because of the universal appeal of The Simpsons, a sitcom covering topics large in scope due in part to its animated nature.

“The town of Springfield acts as a complete universe in which characters can explore the issues faced by modern society,” Nehls said.

Also among the speakers is soccer star Hope Solo, a two-time Olympic Gold medalist and World Cup champion and “widely regarded as the best goalkeeper in the world,” according to the CWA’s website. Solo has become an advocate for women’s rights and is a representative of the Women’s Sports Foundation.

“The CWA program committee chose to invite Hope Solo to the 2019 conference to speak about her work fighting for equal pay and diversity in sports,” CWA spokesperson Erin Rain said. “Committee members believe her perspective will have a positive impact on the conversations at this year’s CWA.”

Solo has courted controversy in the past for her 2014 arrest on two counts of domestic violence. According to reporting done by ESPN, Solo attacked her nephew and half-sister at their home in Washington following a dispute. In 2018 all charges against her were dismissed.

Update: representatives for Hope Solo described the ESPN article as “a piece that is filled with falsehoods and the testimony of a witness who is not credible,” and also said that “Hope has never been at liberty to talk about the facts of the case or share the information that was not reported.”

When asked about this via email, Rain said, “the committee seeks speakers who will contribute to the engaging and challenging conversations that happen at CWA,” pointing to Solo’s discussions surrounding equal pay in sports. She added that “the CWA program committee adheres to the university’s free expression policy.”

Miriam Jordan, a national immigration correspondent for the New York Times, will also be speaking at this year’s CWA. Jordan wrote an article about undocumented immigrants working at a Trump golf course that became one of the Times’ most-read national stories last year.

CWA speakers are selected by an all-volunteer program committee made up of students, faculty and Boulder community members who research and vote on potential speakers. Votes are cast “with a goal of creating engaging panels that will challenge [CU’s] audiences,” according to Rain.

Along with panels, there is also a jazz concert and a film discussion. This year’s film selection is the Pixar movie Wall-E, the first animated film to be selected for the CWA.

The conference is a community effort, with Boulder residents hosting speakers for the week and hundreds of volunteers taking part. A popular way for students to get involved is the ambassador program, where students are paired for the week with a speaker that is connected to their field of study.

Rain said that a record number of CU faculty are requesting CWA speakers to visit their classrooms.

“There is a lot of excitement and anticipation around this year’s conference,” Rain said.