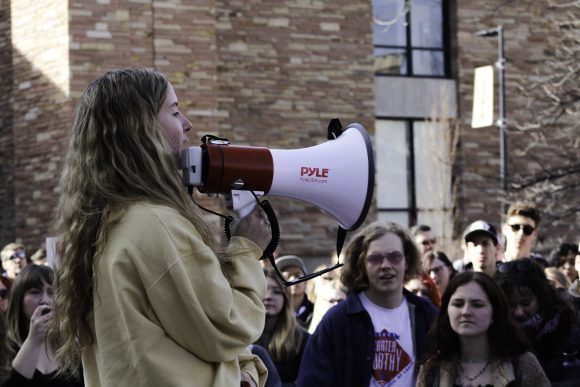 The University of Colorado Boulder says it will implement Secretary of Education Betsy DeVos’ proposed changes to Title IX policies should the changes become the federal standard.

Vice President for Communication Ken McConnellogue told the CU Independent that since CU is a federally funded institution, the university is “obliged to follow” federal changes.

“This is an issue that affects all of CU’s campuses,” he said.

McConnellogue said that each of CU’s four campuses allowed comments from faculty, staff and students regarding the proposed changes. That comment period ended on Jan. 30. Comments were then given to CU’s general counsel office before being sent to the United States Department of Education, according to McConnellogue.

One example of how the proposed changes may affect CU is the liability the university has in addressing sexual misconduct that occurs off campus. According to McConnellogue, if DeVos’ proposals become the new standard, CU will adhere to the change that universities will not have to address off-campus assault.

Despite this, McConnellogue says that CU does not believe that “wholesale changes are in order” when it comes to complying with the new guidelines.

When asked if he believed that the proposed changes are in line with CU’s attempts to create such an environment, McConnellogue said he sees the changes as “changes in the process, not [CU’s] commitment.”

McConnellogue also said he could not comment extensively on what student and faculty feedback was like, but did say that there were people who were on “both sides” of the issue.

While students wait to see what exactly the new federal guidelines will look like, the new changes could be challenged.

Aya Gruber, a law professor at CU, has studied criminal law regarding rape and domestic violence for nine years. Her work began focusing on Title IX and campus assault in particular in 2012.

Gruber acknowledges that CU and schools like it are obligated to comply with federal law, which includes Title IX. However, she says it is not always detailed as to every issue that may arise when “parties are disputing or implementing that piece of legislation.”

Gruber finds the proposal of making universities only liable for on-campus assault highly controversial. She used the example that if a person’s boss rapes an employee, even if it is outside the workplace, it is not excluded from sexual harassment law.

“What does it matter where the rape occurs?” Gruber said. “The thing that interferes with a student’s ability to continue school is that they’re on campus with the person who raped them.”

This is one proposal Gruber said could be challenged in a higher court.

“If it makes it into the final regulation, I’m not sure that that wouldn’t be right for a court challenge,” Gruber said. “Just because it is such a change … I think that is an area where there is interpretive room and there’s also potential challenge.”

She says the 60 percent of students whose assault occurs off-campus “makes sense.”

“If we’re talking about date rapes or acquaintance rapes or rapes at fraternity parties, that’s where rapes occur,” Gruber said. “All of this is off-campus.”

Gruber made clear that if that change and others become the standard, what it states is that “it’s not a violation of federal law for the university to ignore that situation.” However, Gruber said it “doesn’t prevent it from being a violation of state law or a violation of university policy.”

“In other words, the regulation doesn’t say that the university can’t address [off-campus assault],” Gruber said. “It just says that it doesn’t necessarily constitute a violation of federal discrimination law. That part I think the university has some room on.”

Gruber also referenced implementation of cross-examination as another element of the proposed changes which she finds controversial. For a school like CU, it is a massive institution with many resources which could facilitate a live hearing of witnesses, according to Gruber. 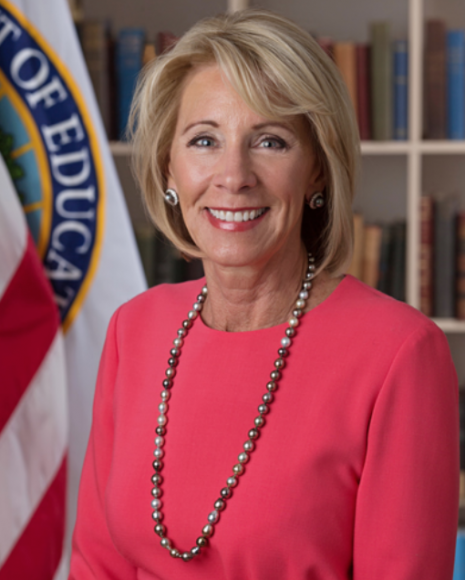 “For schools that don’t have those kinds of resources, it’s not going to be as easy for them,” Gruber said.

Cross-examination would be a policy CU would have to implement fully, as not doing so would be a violation of federal aspects of anti-discrimination law, according to Gruber.

“As a person who has cross-examined people and who has been cross-examined, it’s no fun,” Gruber said. “And if you’re suffering, it’s even more unpleasant.”

Gruber did say that litigation, while it is “stressful,” is an important process to reduce false convictions and is something Gruber says needs to “strike a balance.”

With the public comment period over, Gruber believes that the initial rules proposed will not be the final version that is released. She says that while people may believe DeVos had her mind made up from the beginning on how certain changes would look, the comments from the public will most likely affect the final result.

“I don’t think it is wise to ask for comments and then just completely ignore them,” Gruber said. “We may be seeing changes and it could be significant from that proposal to the final. We just don’t know what that final’s going to say.”

“You can’t fudge the numbers”

A group of CU students recently conducted a survey in order to gauge peoples’ thoughts on the Title IX changes. The responses were overwhelming against the new proposals.

Sara Cooley, a senior English major, joined with her fellow classmates to launch a questionnaire that would ask students, parents and other demographics about what their thoughts were on the potential changes to Title IX.

The idea came about in a class Cooley’s took last semester. “Speak Up: #metoo #notallmen,” taught by women & gender studies professor Alison Hatch, gave Cooley and her peers the idea to take the discussion of campus sexual assault to others who were not learning about assault in the classroom.

Cooley and others in the class sent out a Google Form to which 597 people responded. Responses came from over 94 different universities in the U.S. across 29 states, with 192 respondents from CU. Students were asked their thoughts on the five primary changes to Title IX with options ranging from “strongly agree” to “strongly disagree.” These are the majority results for each change:

These results were then compiled by the students into a 17 page document which was submitted to Kenneth L. Marcus, the Department of Education’s assistant secretary for civil rights, through the official comment portal on the department’s website.

Cooley says she was not surprised by the responses, especially since the changes are “drastic.”

“I think among groups who are advocates for sexual assault survivors, the changes in my opinion are pretty clearly opposed to the mission statement of those people,” Cooley said.

For Cooley, conducting the survey was “encouraging.”

“I also think that there’s a lot more work to be done here, it’s time to stay involved,” Cooley said.

Cooley said that in light of the responses she received from the survey, she hopes that CU does not implement the proposed changes.

“At least not to the full extent that Betsy DeVos has outlined,” Cooley said. “I don’t think it helps survivors and I really don’t think it does that much to help the falsely accused.”

Kibben says her and her group understand the complexity of the issue and that there is always room for “gray area.” Thus, the group says it attempted to present the information with as little bias as possible, even giving respondents the option to say they felt “neutral” about the changes.

Referencing the Families Advocating for Campus Equality (FACE), a nonprofit organization seeking to give rights to falsely accused student of sexual assault on campus, Kibben said that “not one parent responded in line with anything Betsy DeVos has claimed.”

“Every single parent that responded said ‘as a parent of a student, it is unheard of that [DeVos] would hold victims to this process,’” Kibben said.

Kibben says the project was an opportunity to make a difference, inform others and bring about change.

“As a survivor, as a concerned citizen, as an aware young woman, I’ve heard so many stories,” Kibben said. “It creates this feeling of obligation to do something about it.”

Kibben feels her group’s work succeeded in educating many who were unaware of the issue and believes the experience provides valuable data.

“You can’t fudge the numbers when it comes to something like this,” Kibben said. “And we have numbers, and statistics, and facts, and states, and universities, and almost 600 responses and that is so meaningful.”

For Kibben, she feels CU did not take the time to properly address DeVos’ proposals and is saddened by its decision to adhere to them.

“If CU really wanted to make a difference and really, positively, impact lives of victims who are so often marginalized, they would take the time,” Kibben said.

Students’ sense of CU’s lack of action when it comes to protecting victims of sexual assault was further echoed last week during the first ever student meeting of its kind on campus.

“Title IX is under threat”

During the meeting, Yeager-Wheaton stated that the majority of students found guilty of sexual assault, either under Title IX or in a court of law, usually end up returning to campus, something that can have a negative impact on their victim’s well-being.

Students in attendance referenced the alleged drugging at Sigma Pi last semester, saying that the university’s lack of accountability promotes rape culture. Boulder Police Department’s investigation into Sigma Pi’s implication in the drugging of multiple women was closed last month due to mishandled blood samples. Following this, the fraternity’s national headquarters dropped its own investigation which it had been pursuing.

Students suggested ways that CU could address issues of assault, such as automatic expulsion for students found guilty under Title IX or in a court of law as well as a required three credit course on consent for all freshman students.

One student spoke about DeVos’ proposals, saying “Title IX is under threat.” The student proceeded to voice concerns about DeVos’ changes such as the implementation of cross-examination between accusers and the accused, with many attendees reacting with boos.

Samantha West, a graduate student in communication, is adamant that the Title IX changes are not going to serve survivors but are intended to support those who are accused of sexual assault.

In regards to CU’s statement that it will adhere to the changes, West believes the university took the “easy way out.” However, West believes DeVos’ changes have left uncertainty as to the extent that universities need to adhere to them and thus schools like CU could have “wiggle room.”

“That makes it more complex,” West said. “Yes, they need to adhere to these standards, but it’s also up to [universities] to decide what kind of standards they are going to uphold.”

But for West, she is not “holding her breath” for CU to change its mind.

“I think that CU has taken a stance and that’s their decision to make,” West said. “I think that this meeting shows that things are a brewing, students are unhappy. If CU is serious about serving survivors on this campus, they will listen to students who say they’re not being served.”

For more on the proposed changes to Title IX and its effects on CU students, read CUI’s coverage here.