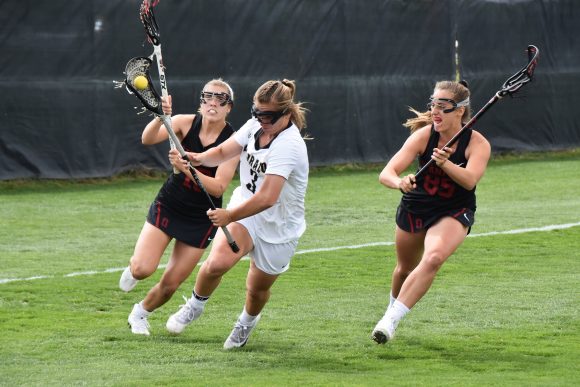 The No. 23-ranked University of Colorado women’s lacrosse team (1-3) will travel to California this weekend to take on No. 15 Stanford (4-1) on Friday, followed by a contest against Cal (3-4) on Sunday.

This road trip will give the Buffaloes a chance to get back on track after dropping their last match at home to Michigan, losing 8-6 against the then-No. 25-ranked Wolverines. With that last game against Michigan being on Feb. 24, the Buffs have had plenty of time to regroup and improve before entering Pac-12 play.

“Now that we are going into conference play, these games are more exciting and more important,” said senior attacker Caroline Perry. “After the last couple games we have realized that we need to work on transition and really pushing the ball on fast breaks. So we have definitely been focusing on a lot of those looks and just having a sense of urgency with what we are doing.”

The Buffs are coming off a stellar season last year, sporting a 14-6 overall record, including a 9-1 mark in the Pac-12, which earned CU the No. 1 spot in the conference.

Close behind the Buffaloes last season was Stanford, which owned an 8-2 record in the conference. This first match up will prove to be a good one, with both teams looking to repeat the success of last season.

Despite the loss to the Wolverines, Colorado put up a solid effort but just couldn’t come out on top. After letting up seven scores in the first half, the Buffaloes’ defense shored up and allowed only one goal in the entire second half, while adding three scores of their own.

The Buffs were playing catchup the entire game, however, and nearly completed the comeback  before the clock hit zero.

On top of that, CU led the game in ground balls per period and had half as many turnovers and fouls as Michigan. The Buffs did pretty much everything right but still couldn’t win.

“We have been focusing on transition,” said junior midfielder Anna Collawn. “So hopefully the turnovers that we get on our defensive end can translate to our offensive end. That’s something, especially [against Michigan] we didn’t see, so hopefully focusing on that will help us get goals.”

One aspect of the Buffs’ play that could be improved upon is the success of their free-position shots. Against Michigan, Colorado made just three out of their ten attempts during the game. These shots are not guaranteed goals by any means, but if CU wants to succeed this year, being more successful from free-position shots is one way to get there.

In general, whether it be the free shots or not, the Buffs need to up their offense against a strong Stanford defensive team. The Cardinal’s sophomore goalkeeper, Trudie Grattan, is the reigning Pac-12 Defensive Player of the Week, after helping her team to two wins while averaging a .616 save percentage and a low seven goals-against average.

A tough Stanford goalie will make it even harder for a CU team that’s scored just 37 goals this season, the fewest in the Pac-12. Cal on the other hand, a team the Buffs will visit on Sunday, has scored a Pac-12 leading 81 goals. Stanford is just a few goals behind with 74 on the year, good for the third-most in the conference.

To be fair, though, Colorado’s lack of offensive numbers is in part due to the fact that the Buffs have played the fewest amount of games in the conference so far.

Another possible explanation for the Buffaloes’ early struggles could be attributed to the team’s insurgence of youth this season. Colorado is fielding 12 freshman this year, which despite all of the new faces, has not affected the squad’s dynamic.

“The team chemistry has been great,” said Perry.  “It’s been a little bit different because we got 12 new freshman this year. It’s really fun because it’s a lot of new personalities that have gotten to add to our chemistry and so far we have just been more of a team.”

Collawn agrees the the team’s dynamic is rock-solid.

“I think one of our strongest aspects is team chemistry, but we just need to execute,” Collawn adds. “The chemistry is definitely there; and as soon as we execute, we will have a lot of success.”

With 12 freshman and only six seniors, the team lacks in overall experience, which may explain the first few losses. Fielding a team that young against four straight ranked teams is no easy feat. The Buffaloes hope their strong cohesion will translate to victories soon enough.

“My personal goal for the season is to go out with a bang,” said Perry. “All the seniors really want to be the best we can be and our main goal right now is to win the Pac-12 championship.”

The road to that Pac-12 title begins Friday at Stanford. Colorado will square off against the Cardinal at Maloney Field on March 8 at 7 p.m. MST.