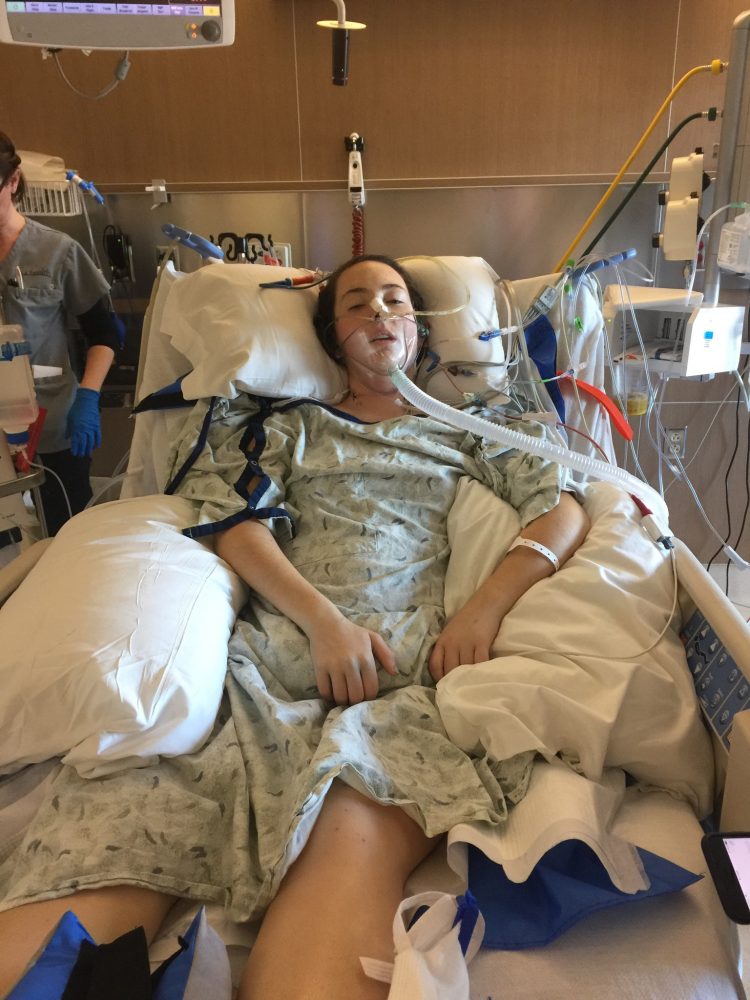 Aine Williams recovering in her hospital bed. (Photo courtesy of the Williams family)

Just over a year ago, University of Colorado sophomore Aine Williams’ future in lacrosse was uncertain after she spent two weeks in a medically induced coma. Doctors believe Williams suffered from cryptogenic organizing pneumonia, a rare lung condition affecting small airways and alveoli. She was hospitalized for nearly a month.

Last February, Williams started her day as any other college student might. Then, 30 minutes before lacrosse practice, she felt her back hurt.

“That night I really didn’t feel well at all,” Williams said. “I was cold, and I could barely even walk.”

Days later, after watching the 2018 Super Bowl with her friends, Williams began to feel worse.

“My friends just thought that I was pissed off because the Patriots lost,” the Boston native said.

Shortly thereafter, Williams found herself needing to go to the hospital. Her roommate, and fellow teammate, sophomore midfielder Devon Bayer accompanied her to an emergency room at the Boulder Community Hospital just days after she began to feel ill and stayed by her side until the early hours of the next morning.

“When she got there, everything spiraled down,” Bayer said.

The women’s lacrosse team was traveling to its 2019 regular season opener at Florida and Williams would have to miss traveling. Williams asked head coach Ann Elliott Whidden if other team members could take her place on the trip when she realized she could not go. 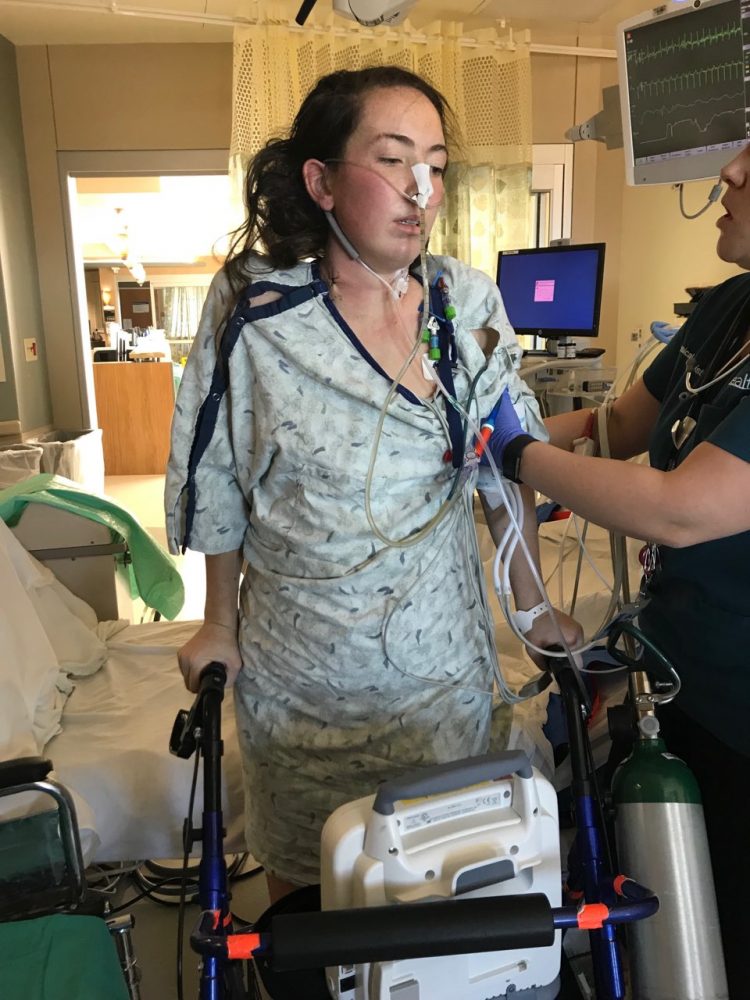 “For a kid that’s in that position to just be thinking about the team and her friends, is really an incredible testament to the type of person she is,” Whidden said.

Williams’ memory of her time in the hospital is faint. She recalled a patient screaming in the hallway before she woke up the next morning with a headache. She does not remember a visit from her cousin who works at CU Anschutz Medical Campus or texting her family about the care her cousin was giving her.

It was a mystery why Williams’ organs were failing, so to figure out her ailment the doctors put her in an induced coma. Her time spent in a coma also allowed Williams to reserve energy for her recovery.

Before Williams was in a coma, she remembers seeing her father’s new shows and liking them.  For the remainder of her time in a coma she was at Anschutz Inpatient Pavilion.

While Williams was in Colorado in a coma, the lacrosse team prepared to play the Florida Gators. In Gainesville, Whidden told the team Williams was placed on a ventilator. She said it was especially hard to tell the team about Williams’ condition as it was just weeks after one year anniversary of the death of senior lacrosse player Julia Sarcona.

“To have to talk to them about anything in the possibility of losing someone else … was really difficult,” Whidden said. “We didn’t know what was going to happen.”

Whidden says she further spoke to freshman members of the team, as many were much closer with Williams and had “a million more things going through their head.”

Two weeks later, Williams woke up. Upon waking up, Williams struggled with her sight but could hear sounds of chatter in the hospital. It was hard for her to walk and began relearning how to take basic steps per her rehabilitation since she was immobile for so long.

She returned to her home in Boston in order to recover, but always knew that she wanted to get back to Boulder and back to playing lacrosse.

“I love it here,” Williams said. “And I always knew that I wanted to get back to the team.”

Now, nearly a year after her stay at the hospital, Williams is readjusting to campus life.

Williams said it was really hard at first being back.

“[It was tough] just being on my own and being at altitude where it was a little bit harder to breath,” she said.

Williams reflected on her time back in Boston when she says she was without responsibilities and began sleeping through the whole day.

To get used to a schedule and to being awake, she worked for her father. Leaving her parents was difficult, but Williams says she’s more than ready to juggle classes and practice once again.

“Hopefully, I’ll just keep practicing and getting better [so I can] get back to where I was before I got sick,” she said. 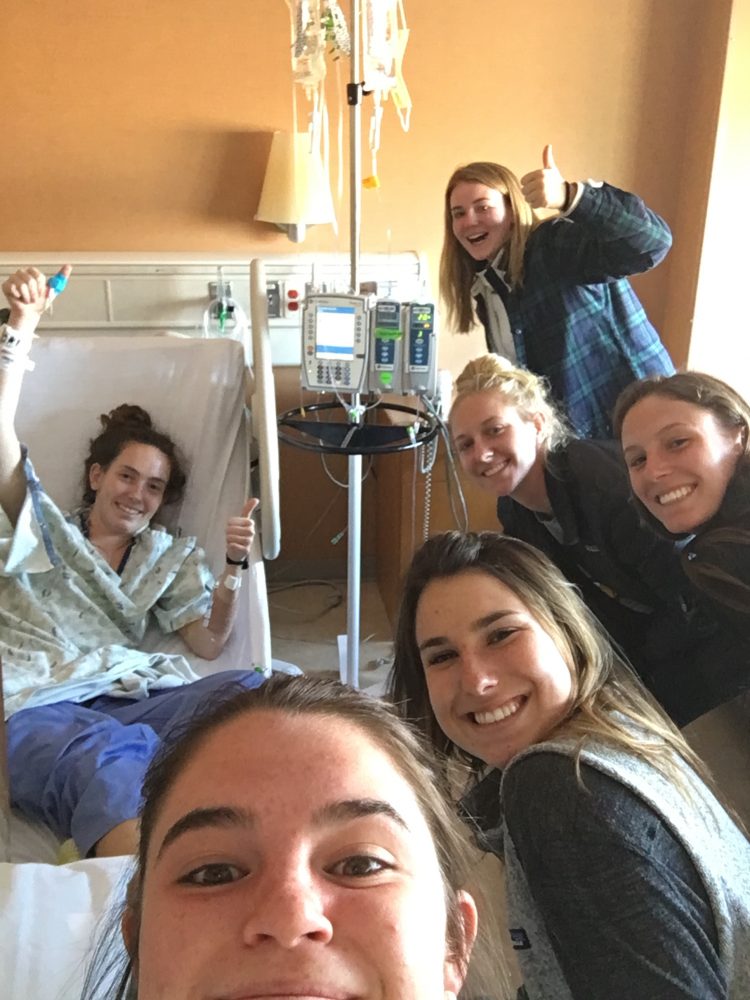 Williams with teammates during recovery. (Photo courtesy of the Williams Family)

Williams hopes to rejoin her lacrosse team but is taking things “one step at a time.”

“I’m sure for her it’s difficult and frustrating at times,” Whidden said about Williams’ steps toward progress. “To be in a position now where she’s fully practicing and is able to go to school full time, it’s really incredible.”

For her friend Devon Bayer, Williams is an inspiration to the team. Bayer says Williams always has a “we” perspective, tries to lift others up and is someone who the team can always look to for support.

“[It’s] ironic that they look to her for support and [it’s] not her looking to others,” Bayer said. “It just shows how strong she is.”