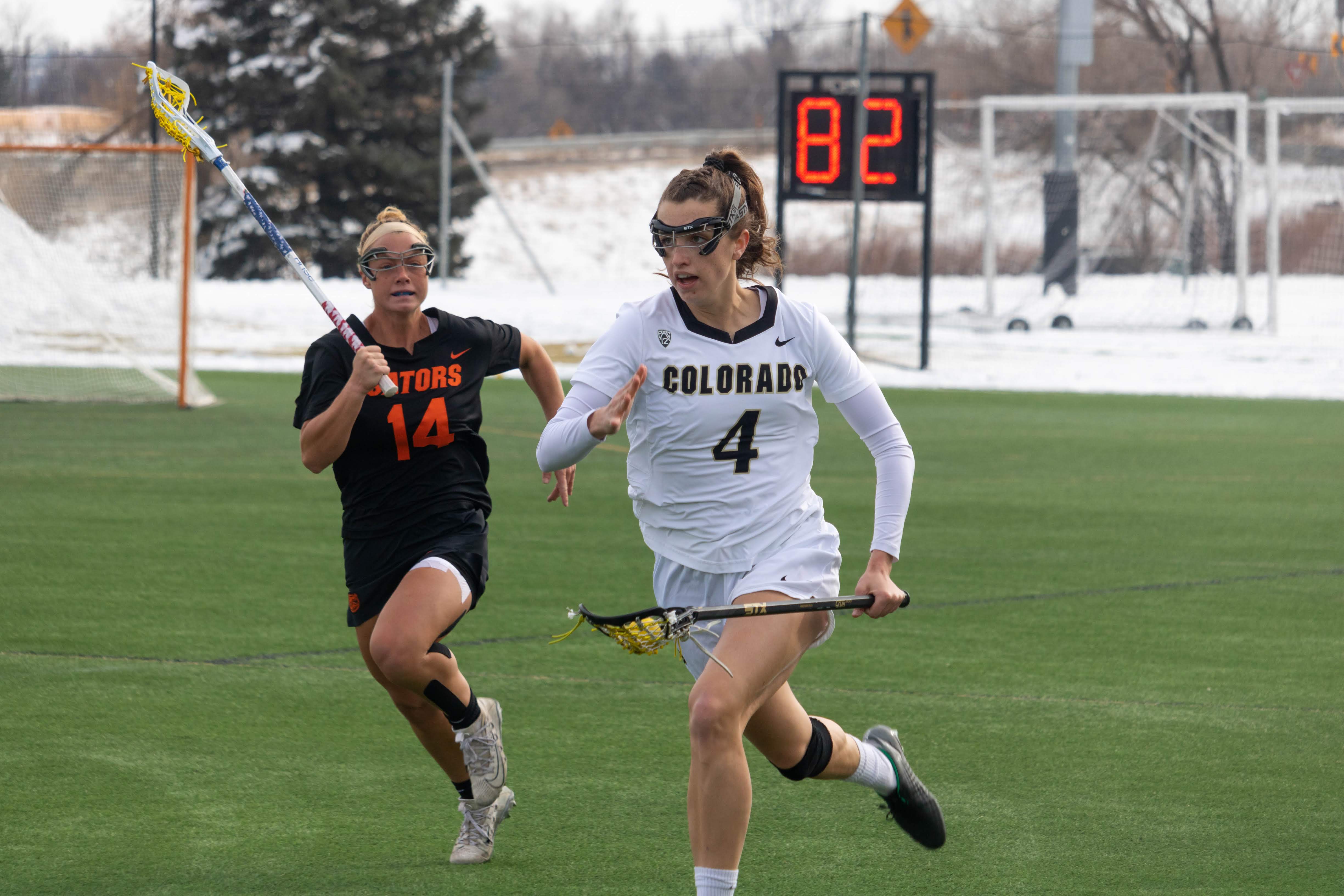 On a cold, snowy afternoon in Boulder, the No. 14-ranked University of Colorado’s women’s lacrosse team (1-2) took on No. 6 Stony Brook (1-0) in the cozy confines of the university’s indoor practice facility.

CU’s start matched that of the weather outside, as the cold and dreary winter bore down on the Buffaloes. That is to say, CU wasn’t quite as warm as the Seawolves when the game began.

Colorado allowed the Wolves to spend a majority of the first ten minutes of the game in the offensive zone. Stony Brook’s control showed, as the Buffs found themselves down by a 4-0 deficit within the first five minutes of play. about 20 minutes to go in the first half.

In the ensuing minutes, Colorado gained advantage and spent some time on the attack. After it appeared, the Buffs had scored their first goal of the game, it was waved off after CU was penalized in front of the net.

In total, the Buffs had 13 first-half fouls.

“Stony Brook is a great defensive team…they’re aggressive, they’re strong, they’re physical, they play well one-on-one and they take up a lot of space in there,” said head coach Ann Elliott Whidden. “We just weren’t doing a great job of seeing the openings and being aggressive ourselves and really moving that pace.”

Two big saves in front by junior goaltender Julia Lisella seemed to give the team a spark of energy. The Buffs spent some extra time in the attack zone but just couldn’t seem to solve the riddle of Stony Brook goaltender Anna Tesoriero, who made seven saves in the first half.

After gaining some traction, the Seawolves stormed down the field just seconds later and made it a 7-0 game. The air of confidence in the indoor facility seemed to dissipate.

That is until senior attacker Miranda Stinson finally broke open the score for CU with a little less than two minutes remaining in the half. It was Stinson’s seventh of the season.

By halftime, the time spent in the defensive zone showed on the stat sheet for the Buffaloes. Colorado allowed Stony Brook 19 shots on its net, tying the most allowed in a half by CU all season long.

While the Buffs were able to slow down the Stony Brook attack in the second half, by the end of the game, the Buffs had been outshot by a 36-26 margin.

“Stony Brook is a good team, and I think they put a lot of pressure on us and they executed offensively and they play a tough defense,” said Whidden. “They’re tough all over the field. For us, when you shoot 5-for-26, that’s not going to help in games. At the end of the day, we didn’t do a good enough job executing defensively and offensively what we knew was coming at us.”

The second half began with a much more energized Buffs team on the field. Colorado spent some time in the Seawolves’ zone, and found the back of the net just over five minutes into the half. It was senior attacker Samantha Nemirov who tallied her seventh of the year for the Buffs to cut Stony Brooks’ lead to 9-2.

Nemirov finished the game with a goal and an assist while collecting three ground balls.

About 15 minutes into the second half, Stony Brook notched two quick goals in the span of 12 seconds to make it an 11-2 contest.

From that point, the game settled into a back-and-forth trading of chances for both teams. Colorado broke the near-10 minutes of scoreless play on a goal by sophomore midfielder Sadie Grozier with roughly 16 minutes left in the game, making it an 11-3 affair.

But as they did for each of CU’s goals, the Seawolves didn’t allow the Buffs to celebrate for long, answering right back with a score of their own.

The Buffs dominated the offensive zone possession time in the second half, but stout Stony Brook defense and solid performance by Tesoriero just couldn’t be solved. Even on a breakaway by Stinson, Tesoriero was able to stop the ball. The Buffs attacker was fouled, however, and managed to convert her free-position shot to make it a 12-4 game with just over six minutes to go in the contest.

Stinson finished the game with two goals, two assists and led the team with nine shots on the afternoon.

The Buffaloes will need to quickly move past this loss, before the team welcomes yet another ranked competitor to town on Sunday against the Michigan Wolverines.

“We [have] to look at the film and get better from this game and we’ve got to look at Michigan and we got to get our players prepared for that,” said Whidden. “[Michigan] is a physical and strong team, a team with a lot of confidence and a lot of athleticism, so it’s not going to be any easier for us on Sunday, and our players have to be accountable for this and own this 15-5 [loss]. At the end of the day, we got to come back Sunday with a little more chip on our shoulder and prove something.”