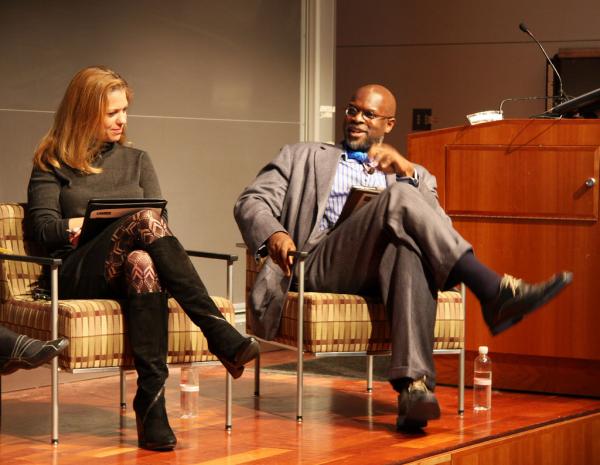 Dr. Tufuku Zuberi speaking on a panel. (Photo courtesy of The Center For Western Civilization, Thought and Policy)

Tukufu Zuberi, a professor of Africana Studies and Sociology at the University of Pennsylvania, spoke on Friday about his interpretation of social psychologists’ views on race. The event, hosted by the Center for Western Civilization, Thought and Policy, served as the second lecture in an on-going series which examines American identities.

Zuberi’s lecture, titled “Fear of White Demographic Suicide”, examined the past and present demography of race. He adopted a scholarly standpoint when looking at the morals behind racism.

“The ideological belief of race as a skin color is a social construction,” Zuberi said.

He asserted that race in itself is a myth and that we are not in a post-racial world. Scientifically speaking, there is not a link between race and genetics, which is a historically and socially constructed idea to explain inequality.

“The race question is also a moral question,” Zuberi said. “Race is not an illusion. Race is not genetic.”

Zuberi believed that defining people by a singular race or ethnicity causes a problem in census recordings. He went on to say that defining someone by one race is giving a group of people a singular identity and that categories are artificially defined by human beings using religion, culture and appearance.

Towards the end of his lecture, Zuberi examined the idea of white concerns over the loss of western culture while immigrants or other populations integrate into society. This has caused a “fear of white demographic suicide”, he said, specifically in societies with “white supremacy.”

To Zuberi, if you answer the question of why certain groups have advantages over another because of their race, you have answered many of the problems in your society. He turned to the past to provide examples of how views on race have hurt marginalized demographics.

The Columbian Exchange, or as Zuberi termed it, “The Columbian Devastation,” included widespread transfers of agriculture, animals and even other human beings during the 15th and 16th centuries. The African population declined dramatically during this time period relative to the rest of the world due to trade and labor. Zuberi explained how Europeans came to Africa and suddenly constructed the idea that they were worth more than any other race.

“The power to define who is human has been a very important power,” he said.

“We are tasked with providing a different perspective,” Zuberi said.