Gender and sexuality explored through ‘The Vagina Monologues’ 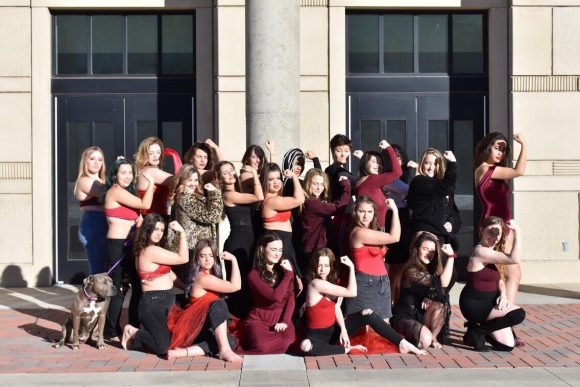 CU V-Day held the last of three performances of its annual play “The Vagina Monologues” in Old Main on Saturday, Feb. 9.

The show consisted of 17 separate monologues based on the recounts of 200 women about their life experiences framed through stories involving their vaginas. CU V-Day, the campus organization that holds the show each year, strives to promote social change around violence towards women.

The performance raised money for Moving to End Sexual Assault (MESA), the only rape crisis center that serves Boulder and Broomfield counties.

According to MESA Bilingual Victim Advocate Martha Hawkinson, MESA is the third oldest crisis center in the United States, founded in 1972. MESA is “so grateful” for the funds received from the show every year, Hawkinson said.

“I was in the cast last year and it was such a good and positive experience for me,” Griffith said. “I knew I wanted to be a part of it again this year.”

Sophomore Megan Pryor, who joined the show’s cast last minute after a previous member backed out, said the stigma around vaginas “has a lot to do with females or vagina-owning people experiencing sexual pleasure.”

“Anything that’s not for a man’s pleasure is frowned upon,” Pryor said.

“The Vagina Monologues” has its flaws, cast member Cam Thomas pointed out. The seventh monologue in the play is entitled “They Beat the Girl Out of My Boy… Or So They Tried” and revolves around the experiences of transgender women. The monologue heavily relates womanhood to owning a vagina.

“The Vagina Monologues” is a play written by feminist playwright Eve Ensler in 1995. Having been written over 20 years ago, is quite outdated.

“The problematic nature of it wasn’t quite so problematic when these were written,” she said. “They just haven’t been updated to reflect the current times.”

Griffith continued that the next CU V-Day meeting would address some contentions with the show.

“We recognize that it’s not perfect and that there’s a lot wrong with it, but we legally aren’t allowed to change those problematic things in the show,” Griffith said.

The directors did take the liberty to cut out a few offensive aspects of the show, however. For example, in the monologue “The Woman Who Loved To Make Vaginas Happy,” there is a montage of different types of moans. The “black moan” and the “baby moan” were both omitted from CU V-Day’s version of the show.

“Where we can change things, we do, but for the most part we can’t,” Griffith said.

Despite its setbacks, senior cast member Erin Garst said the play strongly advocates “not just for women, but for people; people within the gender and sexuality spectrums that don’t have a voice.”