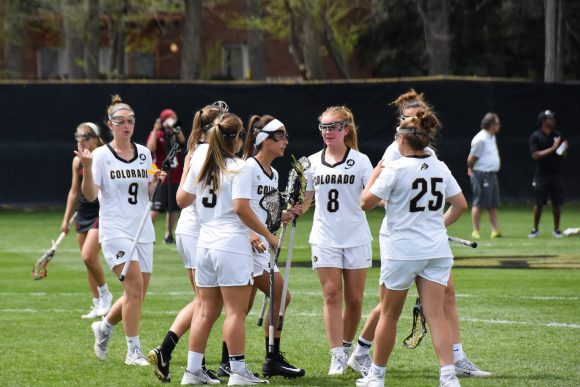 By the time the Colorado Buffaloes women’s lacrosse team begins the 2019 season on Saturday, it will have been 282 days since the University of Florida knocked the Buffs out of last year’s NCAA national tournament, ending their 2018 season.

Who better to start the 2019 campaign off than that very same Florida team?

On Saturday, No. 17 Colorado will begin its journey back to the NCAA tournament with a rematch against the No. 6-ranked Florida Gators at Kittredge Field.

“Obviously from last year, [Florida] is a team we know well, a team that we kind of started our season with and a team that ended our season,” head coach Ann Elliott Whidden said. “We’re really excited to be able to play them here in Boulder … We’re just excited to get started and have great competition against one of the top-10 teams in the country coming here to Boulder on Saturday.”

Last season was a very successful campaign for Colorado. The Buffaloes finished the year with a solid 14-6 record, including an impressive 9-1 record against Pac-12 teams. The Buffs’ conference record landed them at the top of the standings to begin the Pac-12 tournament, which was hosted in Boulder.

Stanford foiled the Buffs’ conference championship hopes when the Cardinal topped Colorado in the Pac-12 championship game by a final score of 15-6.

This season, the goal is clear: get better, finish the job and win the Pac-12 championship.

“Throughout the past four years, we’ve had similar goals, like trying to get further than we’ve ever gotten,” senior attacker Sophie Castillo said. “But I think this year, we want to take it a step further than the past years we’ve made it to the tournament … Winning a Pac-12 championship is definitely in there somewhere.”

It’s safe to say that winning a championship is the goal of this year’s team, as it is every year.

“We definitely want to win a Pac-12 championship,” junior goaltender Julia Lisella said. “I think we want to continue to grow each game and get better each game that we play.”

Standing in the way of the Buffs’ conference championship hopes, however, are four non-conference contests that begins with arguably the team’s toughest competition of the season: the No. 6 Florida Gators.

“I think our focus is obviously on Florida,” Whidden said. “And I think this team that returns [for Colorado] understands what it was like feeling like losing in the NCAA tournament [to Florida] … It was a tough loss for us. We did a lot of things well and Florida was just the better team that day.”

After almost nine long months of an offseason without any competition, jumping right in against a top-10 school certainly can’t be easy. The question of whether or not the team is ready for the tougher competition so early on is a fair one to ask.

“I think we’re looking forward to it,” Castillo said. “Like [coach] Ann [Elliott Whidden] said, we’re all just kind of ready to start playing and get going. We’re not really worried about who we’re playing. These bigger games that we’re going to play are going to prepare us and show us the team that we have to be. If we’re going to start with Florida and Stony Brook and team’s like that, it will show us how hard we have to play every single game and it’ll give us some high expectations right away that we’ll hopefully bring throughout the season.”

For Colorado, being thrown into the fire early in the season against tough competition could be a blessing in disguise.

“We played a scrimmage last week against Northwestern, [which is] a great team,” Whidden said. “I think that [game] will help prepare us for [Florida.] The last three years we’ve kind of jumped right in … Here, having Florida, I think it’s a great opportunity for us and it’s one that’s going to prepare us for conference play and the challenges we face.”

The season opener against the Gators will be a nice litmus test of this year’s Buffaloes team, one that is very freshmen-heavy and inexperienced.

The Buffs lost a few starters from last season to graduation and welcomed in 12 newcomers. In total, this year’s Colorado club boasts 12 freshmen and nine sophomores, for a total of 21 underclassmen, while only having six seniors and 14 total upperclassmen on the roster.

“This year, we have a great team, a young team in many ways, but a lot of people stepping up in new roles and doing great things,” Whidden said. “I think our players are really committed to that and I think we have a lot of young players — whether they’re freshmen or sophomores — that are stepping up to new roles and we’ll see fill in some of the areas we lost.”

It’ll be up to the older girls on the roster to provide some leadership to this youth-movement of a team. Whidden and the Buffs will rely on the likes of Lisella and Castillo to lead the way.

“We definitely lost a few key players and individuals, but as a team, even though we’re a little bit younger, I don’t think that’s going to change anything for us,” Castillo said. “Working together, playing a full 60 [minutes] and coming together as a team is what’s going to make us stand out from the previous years.”

And as a goaltender, Lisella likes what she sees so far from the younger defense that will be in front of her this season.

Lucky for the Buffs, though, while they face tough competition right out of the gate against Florida, will have some home-field advantage. The Buffs boast a 31-5 all-time record at Kittredge Field. Colorado hopes to ride its home success from last season, where the Buffaloes went a perfect 7-0, into the opening game this year.

“I think for this program, we’re a team that loves to play at home,” Whidden said. “Whether it’s in conference or out of conference, we’ve done really well at home. I think it’s a tough place to come and play. I think for us it’s exciting, we’re energized, we have great fans, it’s a great environment for us out there and our players come to compete. We’re looking to set that tone in many ways on Saturday and we’re just fortunate enough to play a great team and do it here and see what we can do.”

It will be the first time Colorado plays host to the Gators. The Buffaloes will look for its first program win in history against Florida at 12 p.m. MST on Saturday.