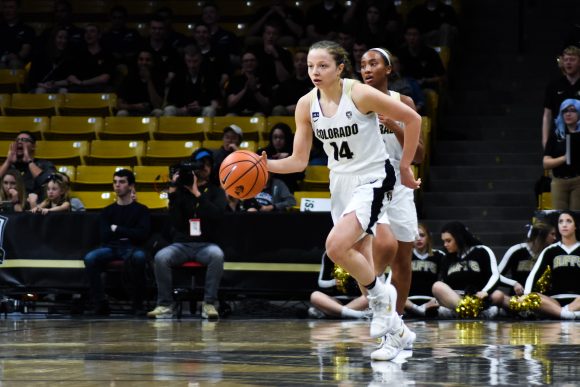 The University of Colorado Buffaloes women’s basketball team took down in-state rivals Colorado State by a final score of 59-40 on Wednesday evening at the CU Events Center.

The 50th all-time meeting between the two squads ended with a comfortable win for CU, which despite shooting just under 29 percent from the floor on the night, was able to get the job done.

The Buffs were led by sophomore guard/forward Mya Hollingshed, who led Colorado with 15 points; she was 5-of-9 from the floor and made three shots from downtown in the win.

Hollingshed was critical to the Buffs early in the game; CU’s cold night from the floor began early, as the Buffaloes’ first five shots — four of which were three-point attempts — all missed.

As the first quarter progressed, Hollingshed was at one point responsible for 10 of the Buffs’ 14 points.

“My feet were set on a lot of those shots and they were wide open, so I just took it,” she said. “I felt good about it. I just shot it and let [the ball] fly.”

Luckily for Colorado, the Rams had an even colder night in terms of making shots. CSU converted just 27 percent of its shots.

After 10 minutes of play, Colorado maintained a 14-13 lead, but in the second quarter established a more comfortable margin after outscoring the Rams, 16-8, during that span.

Senior guard Kennedy Leonard hit two three-pointers within 1:11 of each other, giving CU a 22-17 lead with 7:14 before halftime.

Leonard’s six assists led Colorado, and she contributed eight points to the Buffs’ cause.

From there, freshman guard Peanut Tuitele — who was second on the team with 14 total points — hit a layup in the paint, giving Colorado a 24-17 edge.

The Buffs nailed two more shots from beyond the arc to close out the half, giving them a 30-21 lead over the Rams to begin the third quarter.

One of those two three-pointers was made by senior guard Alexis Robinson, who despite attempting a team-high 12 field goals and eight tries from long range, made just two baskets on the night.

“With Lex, I tell her to keep shooting,” said head coach JR Payne. “She’s a fantastic shooter and has proven throughout her entire career that she’s one of the best shooters that’s ever been at CU … Lex has the ultimate green light and we want her to shoot the basketball.”

The Buffs kept CSU scoreless for the final 2:34 of the second quarter and kept up the pressure on the Rams; Colorado State did not score another basket until the 3:44 mark in the third quarter. By then, the Buffs had solidified their lead and were up 39-23.

Tuitele came alive in the third quarter. She was one rebound shy of a double-double on the night and was a big factor in Colorado’s ability to score points in the paint.

“Peanut does everything,” Payne said. “When Peanut gets going and her energy is fantastic … I think everybody [feeds] off those o[ffensive] board put-backs and things like that.”

The Buffs had a lead of at least 17 points throughout the entire fourth quarter. Despite an off evening in the shooting department for both teams, Colorado emerged victorious over their rivals with the final score reading 59-40, CU.

Up next for the Buffaloes is a home game versus the University of North Carolina on Sunday, Nov. 18. CU and the Tar Heels tipoff at 1 p.m. MST.