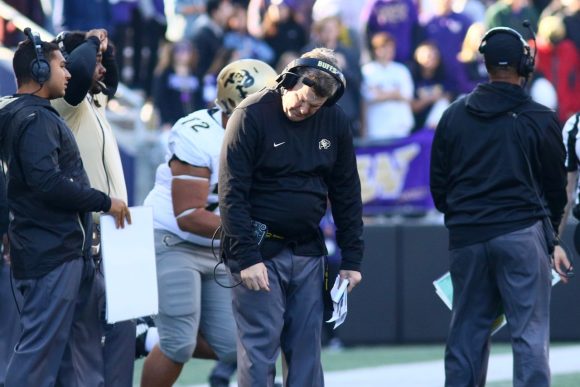 Editor’s Note: Since the publishing of this story, additional information and comments from CU athletic director Rick George, Buffs head coach Mike MacIntyre and players have become available; The CU Independent will continue to update this story as necessary.

Late Monday night, local ABC affiliate The Denver Channel reported that the University of Colorado football program and its six-year head coach Mike MacIntyre will part ways at the conclusion of the season.

The reports have not been confirmed by any officials from CU. However, the initial Denver Channel report claims that the news team reached out to an associate athletic director, who could not confirm the report.

“We do not comment on speculation or unsubstantiated rumors with anonymous sources. Let me just say I have made no decisions regarding the future of the football program. As I’ve stated in the past, we continually evaluate all aspects of all of our 17 intercollegiate sport programs.”

Earlier this afternoon, MacIntyre and the Buffs held their weekly Tuesday press conference. The rumors of the former’s potential impending removal as head coach was addressed play players and MacIntyre himself.

“Two weeks ago [George] came in and saw me, talked to me, and [was] completely behind me and committed…,” MacIntyre said. “[He said] ‘keep going [with] everything. I’ve seen him multiple times since then and he’s never said a word to me about anything to this effect. There’s always going to be chatter…[people] can say what they want to say.”

“As for the rumors, that’s what I’ve heard they are – just rumors,” he said. “At the end of the day, it really doesn’t change how we feel as players and how we feel about this season. To win these last two games and get to a bowl game – that’s our goal right now at this point.”

After the Buffs opened the season with a strong 5-0 start, MacIntyre’s team has lost five straight games, none more trying than the 41-34 loss to Oregon State on Oct. 27. It was an embarrassing, season-defining game in which the Buffs blew a 28-point lead at – tying the worst blown lead in school history – to a team that hadn’t won on the road since 2014.

MacIntyre took over for a struggling program in 2013, one that had not had a winning season since 2005 under then-coach Gary Barnett.

Under MacIntyre, the football program showed steady improvement, though he and his teams struggled out of the gate in his first three years in Boulder. After a 4-8, 2-10 and 4-9 season in each of his first three years, respectively, Colorado finally broke through in 2016 with a strong 10-4 record and the school’s first bowl game berth since 2007.

In the following 2017 season, the Buffs regressed to a 5-7 mark. They now find themselves struggling again at 5-5 this year, despite winning their first five games in a row to start the year.

“I don’t think my job is in jeopardy,” MacIntyre said. “But, you’ve got to win games.”

It’s also worth noting that MacIntyre was in the midst of a legal situation when it was found out that former assistant coach Joe Tumpkin, who was fired at the end of the 2016 season, had allegedly been abusing his then-girlfriend, Pamela Fine, for the last two years.

MacIntyre was actually the one to report the allegations to George, who launched an investigation shortly thereafter. A third-party was commissioned by the university to investigate how the allegations were handled.

Ultimately, it was deemed that MacIntyre and George ‘mishandled’ the situation, who were both then ordered to pay $100,000 each to a domestic violence organization.

Colorado faces off against Utah this Saturday, Nov. 18 from Folsom Field at 11:30 a.m. MST.