CU community weighs in on factors behind voter turnout 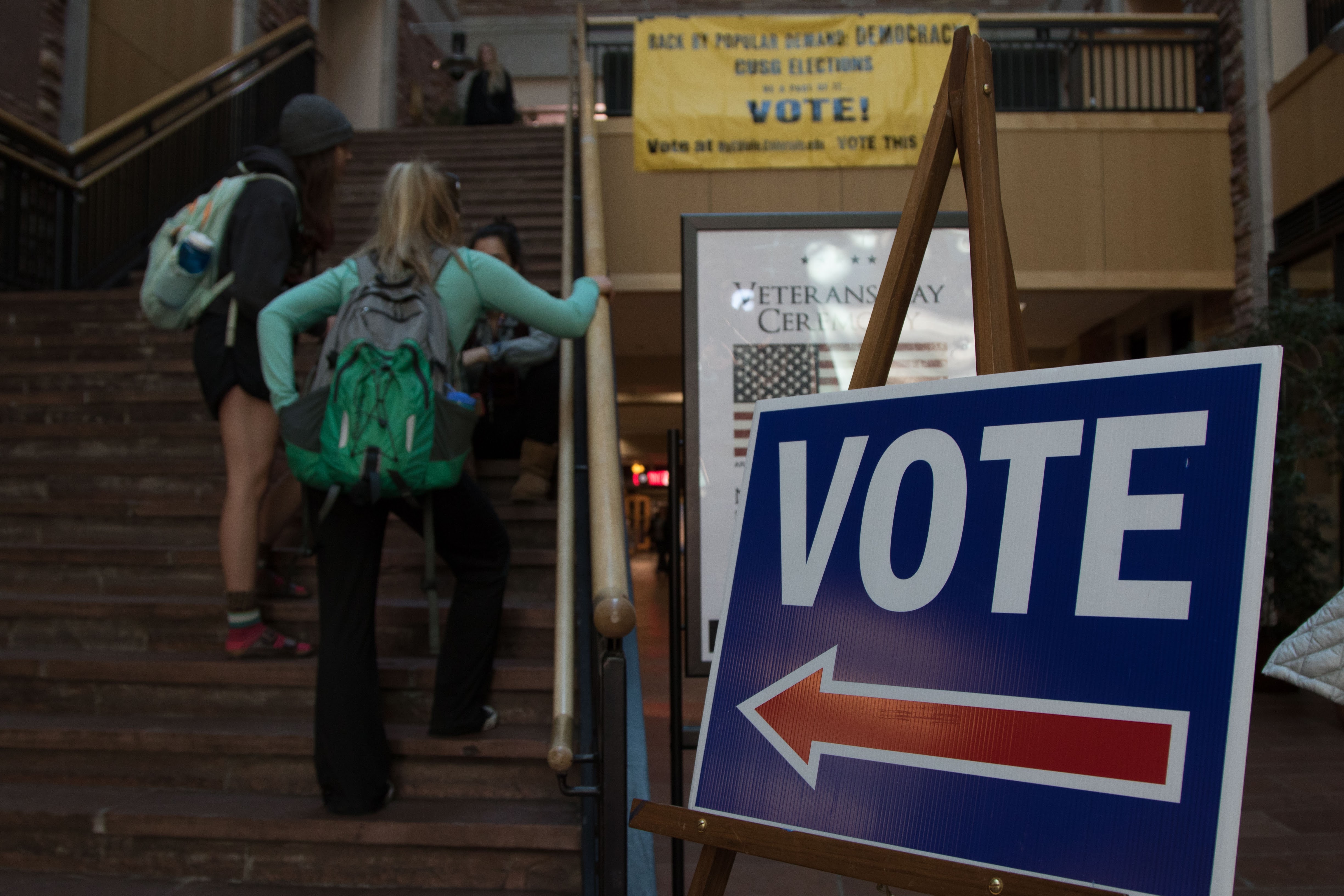 The 2018 general election is fast approaching. On Tuesday, Nov. 6, state and local primaries will culminate to decide the future of various ballot initiatives and elected officials. Among the most important outcome will be the control of Congress, which will either fall under the Democrats or continue to be maintained by the Republicans.

The future of these events lies with the turnout of voters. The most pivotal demographic is 18-25 year olds, who remain some of the lowest for voter turnout. According to figures released by Colorado Secretary of State Wayne W. Williams, 2,254 ballots have been received by females with 2,686 received from males, all aged 18-25. This gives a grand total of 4,940 received by 18-25 year olds within Colorado. These figures are as of Oct. 23, 2018. This age demographic has the lowest number of ballot returns, with most demographics above the age of 41 totaling 20,000 or more returns each.

In regards to the 2014 midterm elections, areas within Boulder County had voter turnout as high as 80%. However, areas around the CU campus were much lower. Voter turnout on CU main campus was less than 45% with 842 active voters and only 370 total ballots according to an interactional map on the Boulder County website. Other areas around campus such as University Hill and 28th/Baseline were under 55%.

How does information create a barrier for voters?

John D. Griffin, associate professor of political science, highlighted access to information as a key barrier for voter turnout. In particular, Griffin sees out-of-state students facing the most challenges when it comes to being an informed voter. These challenges present themselves in different ways, one of them being the process of absentee ballots. These ballots allow voters to cast their vote when they are unable or unwilling to attend their allocated polling station.

“That would be a new thing for them,” Griffin said. “It requires effort and time to become familiar with what the procedure is.”

Information on local candidates and issues is another factor that might make it harder for out-of-state students to vote according to Griffin. Griffin says they will see less campaign literature and advertisement than in-state students who are the ones targeted by political organizations. To Griffin, information is the main barrier for voting.

“If you are a resident of Pennsylvania and you are a student at Colorado,” Griffin continued, “in your daily life, you are not going to be encountering the kinds of information that would help you to be an informed voter.”

Griffin highlighted social media as a powerful way that students, especially those that are out-of-state, can become more informed.

“We know that that’s one of the ways that younger people get access to information,” Griffin said. “My advice would be to tailor as much as possible your geo-location to the area that you want to get information from.”

Despite being a historically weak demographic for voter turnout, Griffin feels that there is more interest in the upcoming midterm elections for younger people than in prior years. The election of then Presidential candidate Donald Trump and controversial appointment of Brett Kavanaugh to the Supreme Court were among some of the events which he believes are responsible for this.

When asked why it is important that citizens vote, Griffin responded that citizen input was necessary for a healthy democracy.

“If we want our democracy to be effective in responding to the needs and concerns citizens have,” said Griffin, “we need to take advantage of the opportunity to provide our input.”

How is voter engagement being generated on campus?

New Era Colorado is a non-profit organization with the goal of informing younger people on the voting process. Founded by CU graduates in 2006, the organization works year-round on various college campuses to provide young voters with resources for taking part in the democratic process.

Regional Organizing Manager Anna Wood talked about the importance of having a resource like themselves for younger student voters. Wood said that of those who register with New Era, 82% turn out to vote. She commented on the optimism she has for the upcoming midterm elections.

“I definitely feel an energy among our generation,” 23-year-old Woods said.

“It’s little things like that that add to a lot of the confusion around the process of voting.” Woods continued, “[For] a lot of students, this is their first time voting ever…so I think it’s important that they have consistent and clear information.”

When asked why people’s votes matter, Woods acknowledged that a lot of people feel disenfranchised. Woods said that New Era typically focuses on local or state level issues when speaking with people about the importance of voting.

“Especially in Colorado, we have seen elections decided by a couple hundred votes,” Woods said. “Sometimes students, because they often vote very similarly to one another, often make the deciding factor.”

Looking ahead, Woods said that contacting all 40,000 people that have registered with New Era since the last election cycle was a priority. Woods believes young people are becoming a bigger part of the election process and is excited to help continue that trend. She exemplified the rise in the discussion of issues like student debt to show the growing population of young voters.

When asked why we should vote, Woods responded: “Why wouldn’t we vote?”.

“It’s not going to do any harm,” Woods said. “It only has a positive effect.”

What are students saying?

Vermont Senator Bernie Sanders recently spoke on Farrand Field about the importance of voting. Many students in attendance said they would be voting come Nov. 6.

“We have the opportunity to decide things in this country. If you don’t take that opportunity than you don’t have a right to complain about what happens,” said Anikka Turmala, a sophomore.

Maddie Pawek, a freshman, believes voting is important for the democracy that the United States was founded on.

Out-of-state students also said they would be voting, despite the initial barriers they might encounter.

Ali Laird, a graduate student who hails from Montana, is sending in an absentee ballot, having voted this way for the past six years.

Lorenzo Nericcio, a graduate student from California, said he feels there is a national sense of urgency for the upcoming midterms.

Dani Goodwin, a freshman from Virginia, believes voting is a way to stand up for social groups. She reassured students that their vote matters.

“I just want to stick up for the rights of LGBTQ… people of color,” Goodwin said. “So many people don’t vote… they don’t think that they don’t have a voice but they do.”

Information is once again the primary barrier for students choosing to vote.

Emelia McBride, a freshman, has tried to emphasize the importance of voting to her friends, who she says are less politically informed.

Sara Faust, a sophomore, is not registered to vote. She says family members are encouraging her to vote but that she does not know enough about candidates to be a voter.

“I feel like I really need to take the time to educate myself before I vote,” said Faust.

However, voting is not a privilege that every student shares. Ashutosh Adhikri, a junior international student from Nepal, wishes he could vote on important issues. Adhikri also sees a lack of information as a reason for why some may not vote.

“My roommates are citizens… they don’t really know what’s happening,” Adhikri said. “It’s better if people are more well informed and they vote, because voting is very important.”

There are currently three days remaining until the elections on Tuesday, Nov. 6. Students wishing to vote may register and do so up until election day.

Voter information on registration can be found on the Boulder County website https://www.bouldercounty.org/elections/register/.