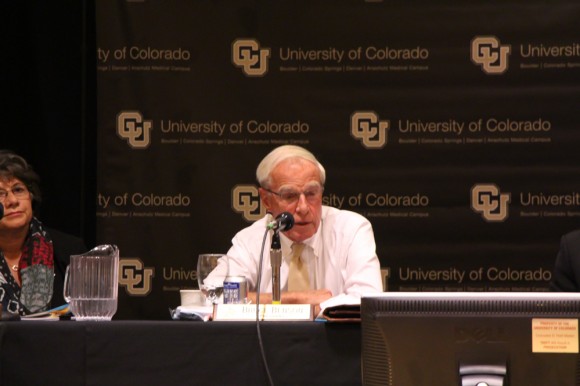 University of Colorado President Bruce Benson speaks during a Board of Regents meeting on Thursday September 11, 2014 at the University Memorial Center. (Gray Bender/CU Independent)

As the search begins for someone to replace President Bruce Benson as the president of the CU system by July 1, 2019, some student groups are concerned that the search committee does not include enough of a student voice in the matter.

Announced in an Oct. 24 email sent to “Members of the University of Colorado Community,” the Presidential Search Committee includes Alex Holmgren as the student representative. Holmgren is currently a second-year MBA student and the associate director for the Center for Western Civilization, Thought and Policy. She has an MA in Political Science from UNC Chapel Hill and got her undergraduate degree in International Affairs and French from CU Boulder in 2009.

On Thursday, Nov. 1, CU Student Government Legislative Council unanimously passed “A Resolution to Oppose the Current Makeup of the Presidential Search Committee” with unanimous votes. The resolution will take effect as soon as the CUSG’s tri-executives sign it.

The resolution calls for additional members to be added to the Presidential Search Committee. It says that the committee is “not in-line [with] a reasonable reading of [Board of Regents] Policy 3E,” which lays out the composition of a presidential search committee. The policy asks for one student and one staff, among the mix of other campus stakeholders.

Konrad Schreier, senator from the School of Law, wrote the resolution. He said that Holmgren is legally defined as a student and “she does add value” to the selection process, so the resolution doesn’t seek to remove her from the position. Rather, the resolution encourages the Regents to add additional members to the committee, which is allowed in Policy 3E.

“I agree with passing this resolution on the basis of keeping her on the committee but adding in a traditional student, and that could be graduate student or undergraduate, as long as their main priority is as a student at the university,” Winter Roybal, Environmental Design senator, said during the resolution’s discussion.

Schreier said that his concern is Holmgren’s status as the associate director for the Center for Western Civilization Thought and Policy, which gives her more of an employee perspective and indicates the selection process “wasn’t in good faith.”

“The idea that the flagship university of the state doesn’t include a traditional student is a little bit ridiculous,” Schreier said during the resolution’s hearing.

The CU Independent reached out to Holmgren for comment, but she deferred questions to the Regents. Ken McConnellogue, spokesperson for the CU system, said that though Holmgren is a staff member, she was selected to represent the student constituency specifically.

“I would suggest that her additional role as a staff member is a positive, not a negative,” McConnellogue said in an email to the CU Independent. “In that capacity, she works with students regularly and therefore brings additional student perspective.”

Holmgren applied for both the student and the staff positions on the committee. McConnellogue noted that of the 190 nominations submitted for the search committee – which could be self-made or sent in by someone else – 56 nominations were in multiple categories. 24 students were nominated, with 16 graduate students and eight undergraduate students.

Two of CUSG’s three Student Body Presidents, Olivia Wittenburg and David Kidd, sat in for the resolution’s discussion at the meeting. The presidents said that the selection of Holmgren for the student member spot “does not exclusively represent the student voice.”

“As there is only one dedicated seat for student input on the committee, this undermines the legitimacy of the Presidential Search Committee and demonstrates a disturbing disregard for student voice,” the presidents wrote in an email to the CU Independent.

Kidd, as well as President Jake Reagan, sit on the Intercampus Student Forum, which has representatives from each student government of the four CU campuses. The forum had “unanimously supported a candidate” that the regents “failed to select,” according to Kidd.

Other student groups are concerned with the makeup of the committee. The Student Bar Association, housed under the School of Law, is looking to consider a resolution or similar document at their general council on Tuesday. Nicholas Monck, president of SBA, said that they also support Holmgren as a staff representative on the committee, but feel like the policy of who should take the student role to represent students was misinterpreted.

“I think this is indicative of a Board of Regents that is not looking out for the best interests of our students, is failing to provide us with an adequate voice and is excluding us from the table where decisions that are incredibly important to our lives, our education and our school are being made,” Monck said.

During the town hall hosted on the Boulder campus a few weeks ago, United Government of Graduate Students (UGGS) President Juan Garcia Oyervides was very vocal in calling for more student representation on the committee, specifically from graduate students.

“We believe there is a clear disparity between undergrad and grad experiences coming to this process,” Oyervides said during the town hall. He also expressed concern that there was only one student to represent all four campuses in the CU system, which enrolled 66,728 students in total for the fall 2018 semester.

The CU Independent reached out to UGGS for comment, as well as the Boulder Faculty Assembly and the student governments of the three other campuses – CU Denver, CU Colorado Springs, and CU Anschutz – but have not received responses from these groups as of publication.

The Presidential Search Committee, assisted by consulting firm Wheless Partners, will be formally charged at the Board of Regents meeting on Nov. 8 on the University of Colorado Colorado Springs campus. The regents can potentially add new members to the committee all the way up until they charge the committee, which is co-chaired by Regent Irene Griego and Regent Heidi Ganahl. Members of the public can submit comments throughout the process.

Both the CU system and Colorado State University are seeking new presidents this year. Tony Frank, current president of CSU and chancellor of the system, announced on September 30 that as of July 1, 2019, he will transition to just being the system chancellor.

CSU’s Presidential Search Advisory Committee consists of 16 members. This iteration of the committee includes five members of CSU’s Board of Governors, multiple faculty members, past graduates, members of their administrative team, the mayor of Fort Collins and an undergraduate student.