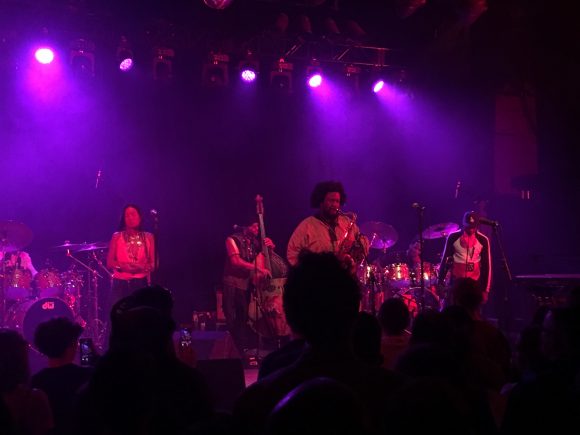 When his major label debut album, The Epic, dropped in 2015 to critical acclaim, Kamasi Washington was 34 years old.

Commercially a late bloomer by industry standards, the jazz saxophonist and composer has been scaling through the scene and breathing new life into the genre since he was a teenager. Starting out in a band with Thundercat, he went on to study ethnomusicology at UCLA, playing with several projects before working with Flying Lotus and Kendrick Lamar on To Pimp a Butterfly.

On Saturday, Oct. 27, Washington, accompanied by a full band, took to the Boulder Theater for a night of propulsive and clattering numbers marked by their ethereal jams. Free-styling and playing numbers from his debut and most recent album Heaven & Earth, Washington delivered a vibrant show.

Standing center-stage with saxophone in hand, Washington wore a tunic evocative of his cosmic jazz forefathers, Pharaoh Sanders and Sun Ra. The light design in the mid-century modern concert hall contributed to the feeling of being lifted into space. Beams appeared as tornadoes of white, pink and green light that built momentum to match the music’s chaos. With heavenly vocal accompaniments from Patrice Quinn and keyboardist Ryan Porter, the performers appeared as a vision from another world.

Given the proximity to Halloween, the crowd was also littered with listeners paying homage to the holiday, including the tall man standing in this writer’s line of sight in an expensive-looking wizard ensemble, swaying with his undead wife.

Throughout the show, it was difficult not to feel like Washington had summoned something divine — some kind of light magic that the eclectic all-ages audience (albeit skewing older) was privileged to witness.

The whole atmosphere began to feel like a clamoring and alive liminal space.

Washington was sure to take breaks from absolutely wailing on his saxophone — like he was playing out the end of the world — to introduce and compliment his band members, many of whom he’s known since his childhood in LA. For being a serious musician, he was actually quite conversational, throwing in several genuinely funny anecdotes involving a PB&J sandwich and a baby picture mixup with one of his drummers, Robert Miller.

Towards the end of the show, he took another break to share some of his personal philosophy and the idea behind the next song, a number comprising of five different melodies playing at once. It was metaphor for the world when we all come together.

On the same day as the fatal shooting at the Pittsburgh Synagogue and the continued administrative threats to migrants, Muslims and trans folks, this statement was met with fierce applause, reverberating throughout the room like a cold-blooded phantom. The platitude was beautiful yet bleak, a reminder of all the times we’ve systematically failed, are failing and will fail again as a divided nation.

But when the music began, dominated by a truly breathtaking standing base solo from Miles Moseley, the statement began to feel full-bodied and hopeful. It felt like good is possible still, at least within the spaces of the music.