Colorado looks to bounce back against lowly Oregon State 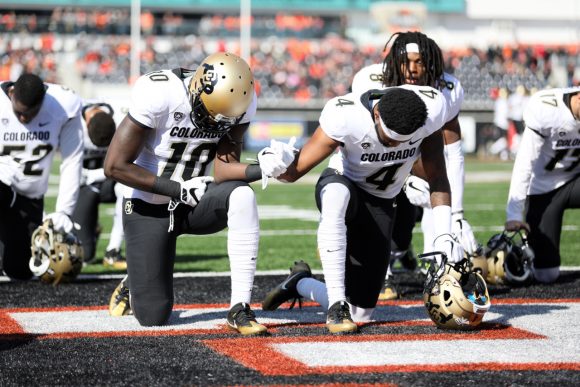 The Buffs pray prior to kickoff versus Oregon State at Reser Stadium. Oct. 14, 2017. (Nigel Amstock/CU Independent)

Losing streaks are nothing new to the Colorado Buffaloes.

Each season since 2002, the Buffs have had a stretch of games where they’ve lost at least two contests in a row.

In the Mike MacIntyre era, he and his teams own a three, eight, five, two and three game losing streak in each of his first six season, respectively. The current skid, as it stands now, is at two losses, after Colorado fell to Washington in Seattle this past week.

“I don’t think our kids think for one second about any streaks whatsoever,” MacIntyre said. “I think they’ll play well. They don’t seem disgruntled, they seem ticked off and wanting to prove themselves. And they also realize what’s in front of us — we got a lot in front of us — that also motivates them too.”

The good news is, there’s a good chance that losing skid will be snapped this week against a poor-performing Oregon State Beavers team (1-6).

Well, maybe that’s not fair to say. Though the odds may be in the Buffaloes’ favor, college football is a volatile game — any team can win any week. But at the very least, statistics are on Colorado’s side.

The Beavers have lost five games in a row, the Buffs are undefeated at Folsom Field this season and Oregon State hasn’t won on the road since October of 2014.

Coincidentally, the last team the Beavers beat on the road was— yep, you guessed it — the Buffs.

The series between these two teams dates back to 1931 and is deadlocked at an even 5-5 record. The Buffs will look to make it four wins in a row against the Beavers on Saturday and gain some ground in a tight-raced Pac-12 South.

This will be a chess match of two evenly matched offenses on Saturday, whose average total offenses are almost the exact same. The Buffs have the slight advantage of 425.9 average yards per game to Oregon State’s 423.3.

The Beavers are in the midst of a which-quarterback-should-we-start dilemma and have averaged 28 points per game, but only managed one touchdown in the team’s contest last week against Cal.

The Buffs, on the other hand, are averaging 31 points per contest, but have averaged just barely over 20 per game in their last three, a noticeable regression.

The Buffs’ lethargic offense reared its ugly head this past Saturday in Washington, when they failed to score any points in the second half and managed to rack up only 86 total yards in the two-quarter span.

“It’ll be huge for us this week to get some positive things going on offense,” junior quarterback Steven Montez said. “I think we have a good offense here and I think Oregon State is going to be a good team. We just have to see who brings their A-game on Saturday.”

One player on the other side of the ball who is certain to bring his A-game is OSU’s freshman running back Jermar Jefferson, who leads the Pac-12 in rushing yards with 899, which is also good for the third-most in the entire FBS.

Jefferson is averaging 6.8 yards per carry and has 12 touchdowns on the season, despite really only playing in six of the Beavers’ seven games this year. The tailback only touched the ball three times in Oregon State’s last contest due to a hamstring injury. He is expected to play this week at Folsom Field.

“[Jefferson’s] explosive, he has a really good stiff arm if you get on him [and] he kind of freezes them and uses that stiff arm and explodes away,” MacIntyre said. “He’s a strong, powerful runner … they have an excellent running attack.“

Lucky for the Buffs, they have a pretty solid run defense.

In their past two contests, Colorado’s front seven was able to hold both Washington’s and USC’s formidable top running backs to less than a hundred yards. The Buffs’ defense has been earning some praise from MacIntyre.

If Colorado can hold Jefferson in check, there’s a good chance the Buffs leave Folsom Field with their sixth win of the season, making CU bowl-eligible for the second time in three years.

For the Buffaloes, it’s gut-check time. A third straight loss and a tough final stretch of games would cripple Colorado.

“No one gets so many opportunities to play,” MacIntyre said. “You’re not guaranteed your next game so you better play every chance you get … The guys behind them have to be able to step up and play. And they don’t just step up and play, they better play well.”

With only five games left in the season, the team is running out of time to gain ground in a tightly-contested Pac-12 South conference. Every win, every opportunity, is huge.

“I think everyone in the Pac-12 is good [and] I think the standings show that,” Fisher said. “Coach Mac talks about fighting and keeping it about Colorado football, and as long as we do that, the chips are going to fall. All we can do is play hard.”

The Buffs will look to remain undefeated at Folsom Field this Saturday, as the university welcomes alumni and fans from around the world for the annual homecoming game. Kickoff is at 1 p.m.

Pac-12 fall football may come back, but questions still...