Fraternizing with the Enemy: Notes on the No. 15 Washington Huskies 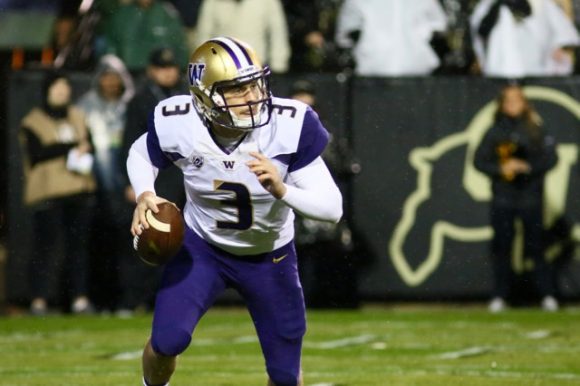 On Saturday afternoon, the Colorado Buffaloes face off against the No. 15 Washington Huskies in Seattle. The CU Independent’s Justin Guerriero spoke with Josh Kirshenbaum, sports editor for The Daily of the University of Washington, to get some insider information on UW.

Justin Guerriero: Walk me through the Huskies’ 30-27 overtime loss last week versus Oregon. What went wrong?

Josh Kirshenbaum: How much time do you have? The defense gave up too much on first down and couldn’t get off the field on third (and fourth) down. The offense stalled out in a few key situations. Peyton Henry missed that field goal, after Chris Petersen burned 45 seconds with a pair of timeouts in his pocket instead of trying to get the ball closer for his redshirt freshman kicker. The Sonics are gone. That dog from the movie you loved is probably dead by now. Life is suffering for UW fans.

JG: Overall, how has the Huskies’ senior quarterback Jake Browning been playing this season? He’s thrown more interceptions than I would have anticipated at this point, but also became UW’s all-time leading passer early in the year. Where is he at right now in 2018?

JK:  It’s been a bit of a roller coaster for Browning this year. On one hand, he’s made some dumb plays, especially on the run. On the other, he’s had some of the best games of his career and made some amazing plays — especially on the run. As a whole though, the UW passing game is miles ahead of where it was last year, and that’s in large part to him, especially in recent weeks. That fourth quarter at Oregon, where he went 6-for-7 and being perfect on what could have been the game-winning drive, was shaping up to be a signature moment for him. His main problems come when he starts moving backwards. If he can stay in the pocket or move laterally, he’s been deadly. When he has to retreat and throw off-balance, it’s led to issues.

JG: The Huskies had four defensive players named to the Midseason All Pac-12 watchlist. Tell me about this defense. Who are the playmakers and what does the Huskies’ defense excel at?

JK: Washington may well have the best defense that doesn’t get many turnovers or sacks. It’s been a bit weird, both because those are two categories the Huskies are historically good at and because they haven’t been thus far this year and are still top-10 nationally in points allowed. In the end, Jimmy Lake’s defense is the same as it’s always been: the Huskies limit explosive plays and simply suffocate opposing offenses over the course of each drive. In terms of numbers, linebacker Ben Burr-Kirven has been the biggest star. It’s not a huge shock for him to lead the squad in tackles (he did last year too), but 93 through seven games is actually absurd. Meanwhile, the secondary is still one of the best in the country: Byron Murphy has only gotten better in coverage, Taylor Rapp has been Washington’s extra rusher and Keith Taylor has stepped up as a the third corner with Jordan Miller battling a minor injury.

JG: On both sides of the ball, where do the Huskies have, if any, glaring weaknesses or shortcomings. Is there any soft spot on this No. 15 Huskies team? Furthermore, how can Colorado march into Seattle on Saturday and win. Think that’s at all feasible?

JK: As a matter of fact, it’s the exact same problem on both sides of the ball (at least in my mind). Washington’s defense ran into trouble against Oregon by giving up too much on first down, setting up second-and-manageable and third-and-short. On offense, offensive coordinator Bush Hamdan has dialed up a lot of play-action on first down, which goes well when it works, but when it doesn’t, it puts you in second-and-long and an obvious passing situation. If Washington can get into second-and-9 on defense and second-and-4 on offense more often that not, the Huskies will be in a good spot. If it goes the other way, that’ll lead to problems.

JG: Exactly how banged up are tailbacks Myles Gaskin and Salvon Ahmed? Will they be near 100 percent on Saturday or do you expect their nagging injuries to impact their play come Saturday.

JK: Great question. We’ll find out on Saturday. The coaching staff has been tight lipped, so we’ll see. I guarantee they’re not 100 percent, but then again Gaskin wasn’t 100 percent last week. He’s been dealing with a shoulder injury, so I’d guess it’s mostly a question of how much impact he can take on it. Ahmed hurt his knee, and when I saw the replay at the stadium I was pretty sure there was some major structural damage but he also came back to the field later. Either way, I’d guess we see a fair amount of Sean McGrew and Kamari Pleasant; the coaches have been happy to go to those to if needed.

JG: What’s the mindset of this Washington team right now? Are they mad after last week’s overtime loss and eager to make Colorado a punching bag?

JK: The players (at least to the media) do a pretty good job of emulating Chris Petersen in not bothering with this whole “emotion” thing, especially now nearly a week removed from the last game. There may be something completely different going on inside the confines of the locker room, but at least on the outside, it’s been the same old this whole week.

JG: When we were chatting via email, I predicted a shocker: Colorado pulling off an upset on Saturday. What’s your take. Who’s winning this game and why? What’s your final score prediction?

JK: You, sir, are bold. I’m not sure you’re right though. I do think it will be close early; all of Washington’s games are tight at the end of the first half. Go back to the game last year in Boulder. Colorado was able to nickel and dime its way down the field early to get on the scoreboard, but then the UW defense started to choke the game out, allowing a decent-but-not-great offensive showing to put enough points on the board to win. I don’t know if the UW secondary can completely silence Laviska Shenault, but the one sign of hope for Washington fans will be the Dawgs’ performance against ASU’s N’Keal Harry, who only racked up 20 yards when he came to Husky Stadium. I don’t expect Washington to score a ton of points, but I expect it to allow fewer, so if I had to put down a guess, I’d say UW takes it 27-16.