Chancellor DiStefano addresses initiatives and concerns at State of the Campus 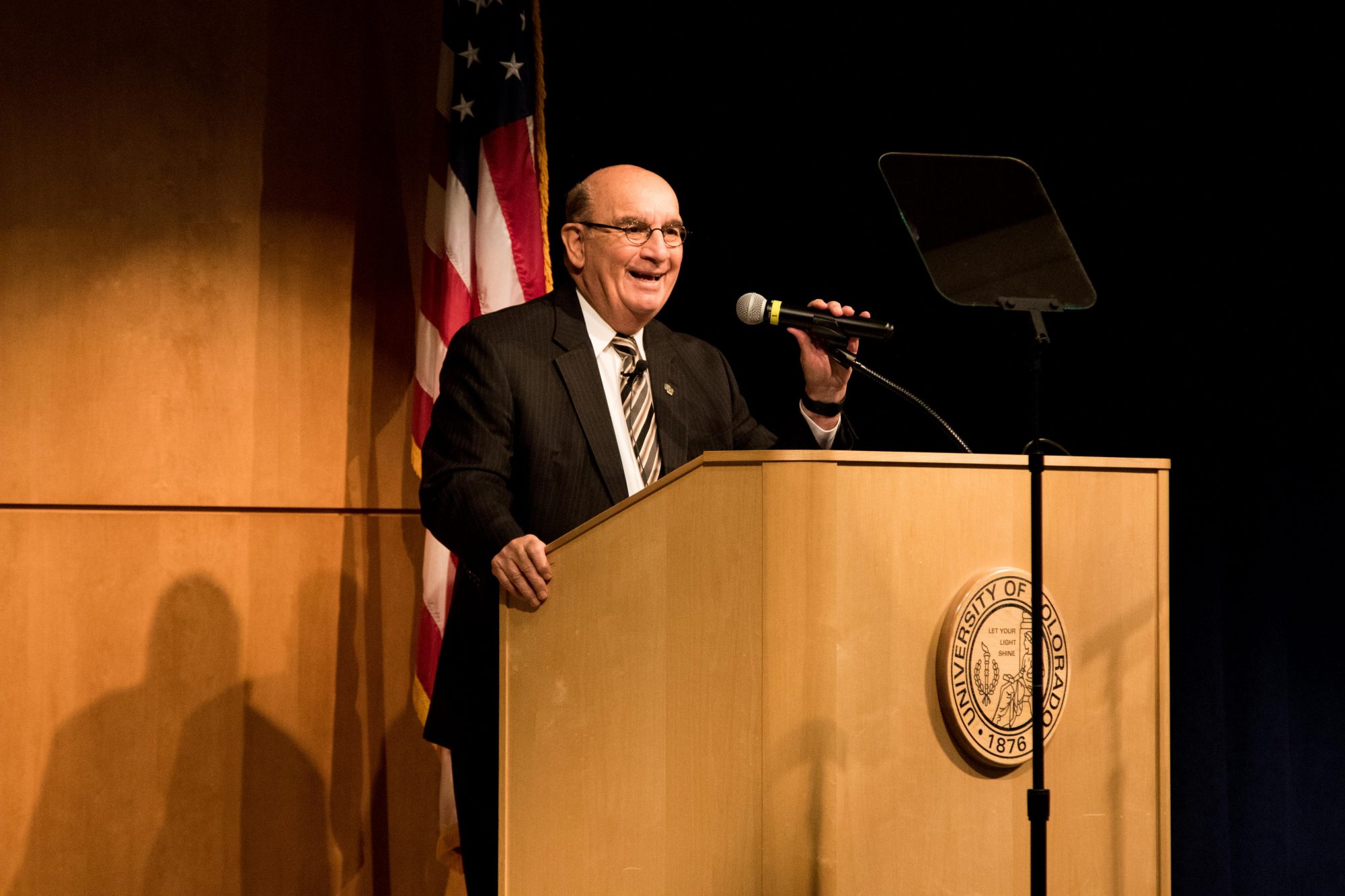 CU Boulder Chancellor Philip DiStefano addressed students during the State of the Campus, on Tuesday. The chancellor engaged in a curated Q&A in which audience members asked questions regarding mental health, diversity and housing. Before this, DiStefano discussed the university’s achievements.

“Alan is an inspiration to me,”  DiStefano said. “He is a credit to himself and he reflects the power of a university community working together.”

DiStefano then introduced freshman Sophie Choubai who received the CU Promise Scholarship and the Esteemed Scholarship.

Choubai feels that CU helped her to gain the opportunity to higher education.

“I was very scared from the prospect of college,”  Choubai said. “Being offered all this financial aid that I never knew existed … ultimately led to my decision to attend CU Boulder.”

DiStefano continued to state that 92 percent of CU Boulder graduates are employed, attending graduate school or serving in the military. He addressed how CU is 48 for state funding, which accounts for 5 percent of CU budget. DiStefano said that through innovative measures, the university has raised funding, leading to extensive research in the fields of science and technology.

These innovations include a growth in endowed chairs, funding and scholarships. DiStefano said this year set a record in donor giving, which totaled nearly $148 million.

DiStefano talked about the importance of research within CU, with 75 percent of research revenue spent locally.

“The nation has always relied on its research institutions,” DiStefano said before listing various ways this research is being used, from drones that record tornado data to prosthetics that can be reformed to fit different people.

However, mental health was an issue raised by audience members during the address. According to DiStefano, CU has seen a 40 percent increase in demand for counseling services, something that the chancellor found “very concerning”.

The chancellor proceeded to list various services to combat mental health issues such as walk-in appointments and one-on-one counseling and therapy.

“It’s very heartbreaking when we have a student commit suicide on campus,” DiStefano said. “Especially a student who’s finishing his last year of University.”

It was unclear which student DiStefano was referring to. When asked for a statement in regard to CU not reporting student suicides, DiStefano did not comment. Spokesperson Ryan Huff intervened, stating that the cause of student deaths is not always known and thus statistics on suicides cannot accurately be tracked.

Other issues raised by the audience included housing and the growing CU population. One audience question asked if CU would ever consider capping enrollment.

“I’m not sure about capping enrollment,” DiStefano said. “We have a mandate from the state as we admit all of our qualified resident students.”

DiStefano assured that the admission process was one of quality and mentioned the building of an additional residence hall on east campus. DiStefano also talked about a “master plan” to provide affordable housing for students and faculty. This plan will involve discussions with the city of Boulder in terms of annexation of south campus.

“If that annexation comes through, one of my priorities will be to build affordable housing for faculty, staff and graduate students,” DiStefano said.

When asked about students who do not receive on-campus housing, DiStefano said that “we know how many beds we have coming here” but that sometimes the “yield is higher than what is expected.”

Another audience question asked for an update on what is being done for diversity and inclusion on campus.

DiStefano asked Sharon Matusik, dean of the Leeds School of Business, to discuss what is being done for inclusion.

Matusik spoke about the importance of diversity in business. She mentioned the establishment of the Office of Diversity Affairs in 2001 and gave examples of how diversity is being promoted. One of these initiatives is called “End the Gap,” which aims to combat gender gaps.

“What we’re trying to do is get our female population to be 50 percent across all of our programs,” Matusik said. “We all feel very strongly that we want to open more women’s eyes to the opportunities that a business education can provide.”

DiStefano also mentioned the importance of CU Student Government, both for students and faculty.

“I need to have a much better understanding of what those priorities are from faculty, staff and students,” DiStefano said. “It’s all about trust.”

When asked how this need for better understanding would impact last spring’s proposed reduction of CUSG budget, the Chancellor responded by saying that more meetings and discussions would be had. Ultimately, the decision to hold off on any impending budget reduction was the “culmination of student response.”

“[DiStefano] did a very good job of addressing specific statistics and specific numbers,” said Paulina Colwell, a sophomore at CU. “I think that more students should be aware of what is happening here.”

Colwell herself participated in the student walkout in response to DiStefano’s planned CUSG budget cut. Colwell wishes DiStefano addressed this issue more during his talk.

“I think that he didn’t talk about it very much.” Colwell continued. “I’m concerned about the autonomy of the student government, and I think that it would be helpful to know more about that.”

“This is the first that I’m hearing about the inter-workings of the university,” Van Rees said.

Van Reese said he was unaware of the extent of many issues such as mental health and housing.

“I get that it’s tough. Boulder’s an expensive town,” Van Rees said. “It’s something that there is no easy solution to, but at the same time, it is an issue that could use a solution.”