Season 5 review: ‘BoJack Horseman’ is back to haunt you 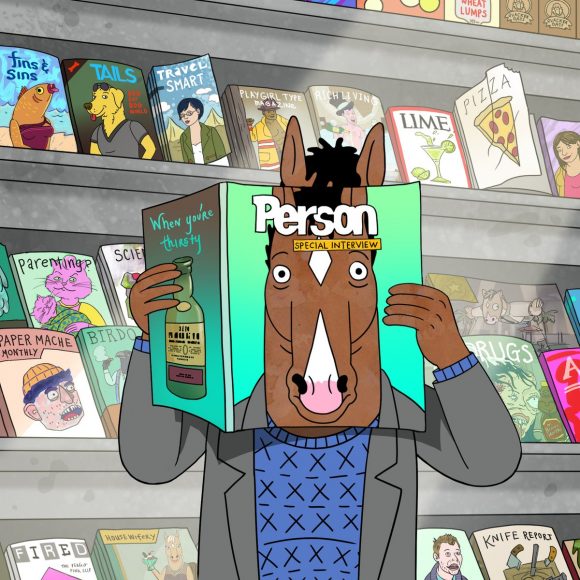 In the first moment of season 5 of “BoJack Horseman”, after perhaps the darkest and most visceral season of the series so far, we find ourselves, oddly enough, at a party.

Philbert, the kind of laughable dirtbag detective character that has oversaturated the holy act of channel flipping, is staring vacantly out at his pool as “Los Angeles” by St. Vincent nods seductively into the scene. The pool, the whole house even, is familiar. We recognize it to mirror that of another alcoholic dirtbag who stars as the titular character in his own show.

“Nothing is lonelier than a party. Good thing I don’t need anyone, otherwise I’d be lonesome,” BoJack said.

BoJack is acting here, but from what we know of his own evolution, as well as the thesis-like placement of the line, it is clear that the similarities between him and his character don’t end at a taste for mid-century modern design. This type of foiling, a sort of two-sides-of-the-same-coin concept, appears regularly in the show as a feedback loop of fuck-ups and trauma between characters (BoJack and Diane, BoJack and BoJack’s parents). Its introductory presence here places us into the mindset of the season; your ugliest fears will haunt you, even through others, until you make peace with them yourself.

At this stage in the series, it’s easy for a show like this to find itself derailed in the complicated arcs of its own making. With “BoJack”, the writers have paced their plays perfectly well, not rushing or taking shortcuts but instead allowing revelations to occur naturally and as a process.

As “BoJack” is first and foremost a show that is deeply humanistic, there are signs in the episode BoJack might now be motivated by something new: the desire to be somehow redeemed—or perhaps finally ruined—by any means necessary.

Last season, BoJack found himself doing what he does best. He ran away from his familial trauma, his friends and from his own interactions with a certain underage deer that drew questions from a viewer’s perspective on whether or not he is ultimately redeemable at all.

But in season 5, he’s working again. He agrees to sign onto the show as a favor to Princess Caroline, drinks in moderation from his marked-up vodka bottle, calls out his boss for being too “male gazey” (a dialogue in MeToo era politics) and actually makes an effort in his interpersonal relationships. At the end of season 4, the discovery of estranged sister HollyHock illuminates relationship development in BoJack’s life that could be refreshingly healthy. However, as Philbert serves to remind us, his newfound efforts to be good aren’t without their struggles.

After sex with a co-star, Gina, who rejects his uncharacteristic suggestion to post-coitally hangout, he takes a swig of vodka at midnight in his kitchen. Panicking at the realization that he is once again alone, he calls his sister, unable to wait for their weekly phone call, to tell her he “hearted” her Instagram photo. BoJack desperately seeks connection and healthy distraction from his pain but is unsure how to approach it, all while remaining dangerously close to returning to his old habits. His vodka may be pre-portioned, but that doesn’t mean the bottle can’t be emptied in one fell swoop by his own hand.

Navigating relationships seems to be a concern for many characters in this episode. Diane and Mr. Peanut Butter occupy a new space as they are shown awkwardly engaged in the handoff of their divorce papers. Todd, now CEO of his own company, “What time is it right now?” (a website that does exactly what you think it does), is in a new relationship with Yolanda and struggles with finding commonalities outside of their mutual asexuality. Meanwhile, a single Princess Caroline looks into adoption options.

The advent of season 5 ends in another mirror image: BoJack hosting a “Los Angeles” soundtracked pool party, with his character signaling the burden of his darkest impulses overhead. “Remember, it’s not about you, it’s Philbert” showrunner Flip says, reminding BoJack that he and his character are not the same—and maybe they aren’t.

Maybe BoJack, like similar anti-hero Don Draper of “Madmen”, will find a shred of peace or gratifying self-loathing retribution by the season’s end.