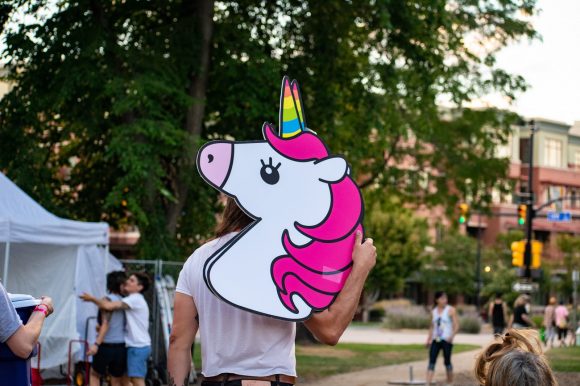 Founded in 1994, Out is a group that educates, supports and advocates for Boulder County’s LGBTQ community. Seagate PRIDE!  is a new resource group for LGBTQ employees of Seagate Technology.

Eclectic band Cat Jerky began the festivities on the main stage, followed by drag king troupe Mile High KINGdom. The kings opened with a group performance of the songs “Macho Man” and “YMCA,” followed by individual performances from each member. 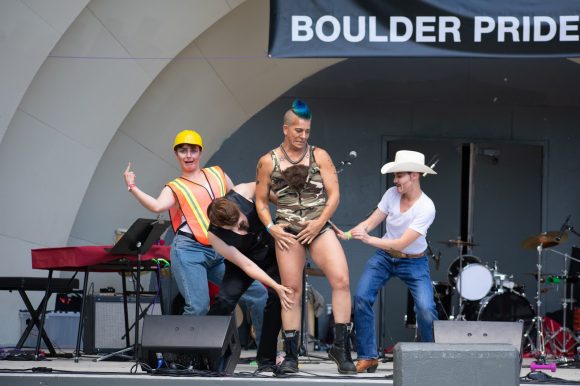 Robin MacKinnon, founder of Mile High KINGdom, started the troupe three years ago after noticing the lack of representation of drag kings in the drag community.

“I’m not gonna stop until we have drag kings booked at every show in this state,” MacKinnon said.

Compared to the nearby Denver Pridefest held each June, which saw roughly 385,000 attendees in 2017, Boulder Pride is a quaint celebration.

“I like the energy from all 50 of you,” host Debbie Scheer joked from the main stage.

The event accommodated dozens of organizations. It saw large corporations like Google and Bank of America, as well as local organizations like Proto’s Pizzeria Napoletana and the Rocky Mountain Leather Alliance. 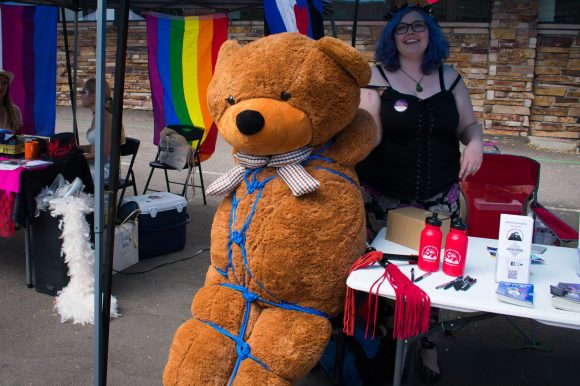 At Out Boulder County’s own booth, they encouraged LGBTQ citizens to fill out an LGBTQ Community Assessment Survey. The survey, funded by the City of Boulder, aims to help Out better understand where its resources should be directed.

“I don’t know what you’re talking about,” Perfume Genius responded. “Here’s my art.”

The main stage celebration then ended with The B-52’s tribute band Hey, Lady! They performed as the festival died down and carried on for an hour after it officially ended. Enthusiastic dancers and hula hoopers formed a crowd at the foot of the stage.

During the introduction of the song “Planet Claire”, vocalist Steven Blasinsky held up a walkie-talkie.

“Are you there, Boulder?” he asked. “Come with us to a planet where all lifestyles are accepted.” 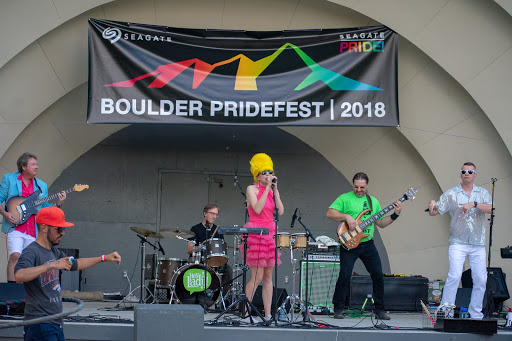 “I feel like this is the best after-party ever,” Blasinsky said.