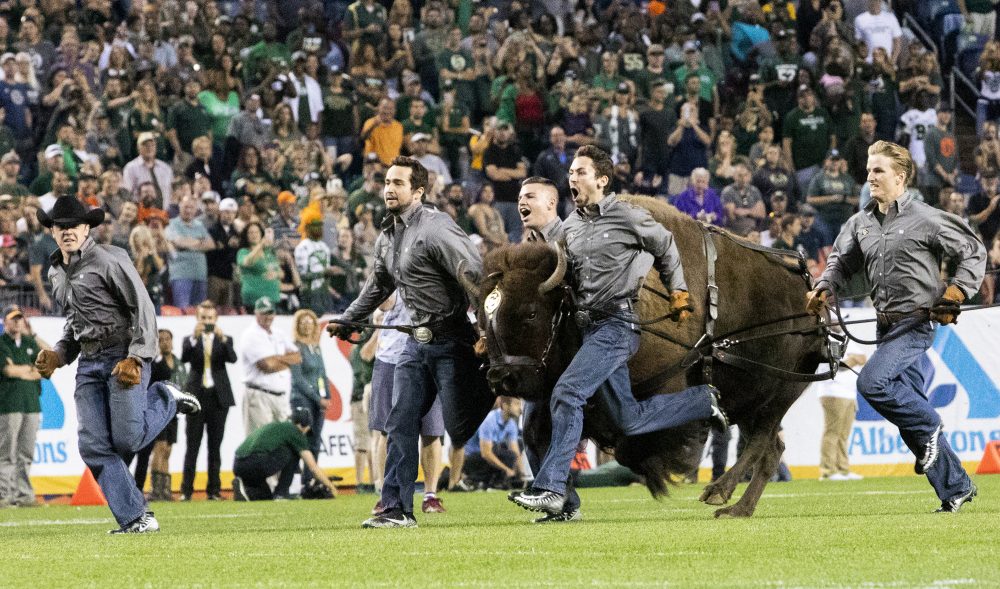 Ralphie and the Ralphie Runners make their way across the field. Aug. 31, 2018. (Bri Barnum/CU Independent File)

A surprise guest attended University of Colorado’s media press conference on Tuesday in preparation for the Buffaloes’ send-off to Lincoln, Nebraska to take on the Cornhuskers for the first time since 2010.

In front of a packed crowd of media in a meeting room at the Champions Center, former CU head coach Bill McCartney, who led the Buffs from 1982 to 1994, offered some inspiring words of encouragement, most aimed towards CU’s current head coach.

“What I’ve learned over the years is everything rises and falls out of leadership,” McCartney said. “What I see in Coach MacIntyre and his staff . . . [is that] these guys are good. They have character, they are trustworthy, they are genuine [and] there’s no deception. They are the real deal.”

It’s the new leadership, the newest coach “Mac”, Mike MacIntyre, who is now tasked with continuing the rivalry that the legendary coach Mac McCartney of CU’s National Championship fame created when he first came to Boulder before the 1982 season.

“I was coming from the University of Michigan where our favorite saying was ‘Oh how I hate Ohio State’,” McCartney said to begin his historical anecdote. “’When I got here,’ I said ‘Who’s our Ohio State? Who’s the team we got to beat?'”

“There was no rival, there was no game to point to . . . When I came here, we identified Nebraska as the team. One of the reasons we chose them and not Oklahoma or others was because they were a neighboring state, they’re next door.”

When the Buffaloes go knocking on the door of the Cornhuskers’ Memorial Stadium on Saturday, it will mark the renewed rivalry between Colorado and Nebraska. One that will continue intermittently at least until the 2024 season, and one that has appeared on CU’s schedule since 1898; making it the second-oldest rivalry in university history behind the great perennial in-state showdown against Colorado State, which is set to expire in 2020.

Most players on this year’s team weren’t around for the rivalry in its heyday of the 1980s and 90s, though the excitement is certainly in the air—not only in the city of Boulder, but in the Buffaloes’ locker room, too.

Excitement aside, MacIntyre is doing his best to ensure his team is ready for the task at hand in Lincoln.

“They are excited about playing this game,” said MacIntyre about his players. “I’ve tried to temper it going into our last week’s game, but that’s the buzz that’s been going around. It’s exciting for our players, for our program, and we’re excited about going to play in Lincoln. They do understand the intensity as best they can at this point but they’ll definitely understand it when they get there.”

For coach MacIntyre, it will be the first time he has faced Nebraska in his career. It’s a clean slate for both he and his players and it’s a fresh opportunity for the Buffs to prove their worth in Lincoln.

In the 13 years with McCartney at the helm for Colorado, Nebraska decidedly got the better of him and his Buffaloes teams. McCartney was only able to beat Nebraska three times, owning a 3-9-1 record against the rival during his tenure.

In total, Colorado has shucked the Cornhuskers only 18 times in the 69 all-time meetings between the neighboring schools. In Lincoln, the Buffs have a less-than-encouraging 8-26 mark.

However, Saturday is the first time since 2010 the two teams will have met and this year’s Buffaloes squad is ready to rekindle the rivalry.

“I think a lot of guys know about the history,” said quarterback Steven Montez ahead of Saturday’s game. “For us, we just treat it like any other game. They’re just another team wearing a different color than us . . . we’ve just been working real hard, and I think we’re going to come into this game with a lot of energy [and] a lot of excitement.”

Just last week, CU opened its season with a decisive 45-13 win against the cross-town rival Rams. The charge was led by an impressive performance from the aforementioned quarterback in front of a crowd of 70,000-plus onlookers.

But when the Buffs charge into Lincoln, they will likely be playing in front of 90,000-plus, (Memorial Stadium holds 90,000,) most of whom will be adorned in red.

After all, Cornhuskers fans are chomping at the bits to see their team for the first time since the 2017 season, after last week’s game against Akron was canceled due to weather.

“I’m expecting a big crowd,” said sophomore linebacker Nate Landman, who was announced the Pac-12 Defensive Player of the Week on Tuesday after recording 16 total tackles and an interception at the Rocky Mountain Showdown, all in his first career start.

For many of Colorado’s players, the crowd noise will likely be among the loudest they have experienced.

“It’s going to be intense,” Landman added. “I’m excited, but honestly I think we’ll thrive in that atmosphere. To kind of have that pressure on us will help bring out our best game.”

One issue for MacIntyre and the Buffs stems from the Huskers’ week one matchup vs. Akron getting canceled: there is no 2018 game film to watch. Therefore, CU knows little about Nebraska’s freshman quarterback Adrian Martinez, who will in all likelihood become the Cornhuskers’ first true freshman to start at quarterback in program history.

The Huskers also have a first-year head coach Scott Frost, who led the University of Central Florida to an undefeated record last season.

“We’ve been watching UCF film and watching their spring game film, trying to figure out what they want to do,” said coach MacIntyre. “It’s a little bit of an unknown but they’ll always have a few new wrinkles in things that they do.”

Although the Buffs have no game film to watch, they have also gotten a game under their belts, lessening the chances of early season jitters.

“They still haven’t played a game,” Montez said. “They have a true freshman quarterback, but we still don’t have film on them. It goes both ways. It can be an advantage, a disadvantage, I think it evens out.”

Having no film, MacIntyre offered the media a scouting report of his own, specifically on Frost.

“They’re very dynamic, his offense is very dynamic, I went up a little against him in Oregon,” said coach Mac of the first year Cornhuskers coach who served a former assistant with the Ducks from 2012-15.

During his time with the Oregon Ducks, Frost bested the Buffs. He was 5-0 against Colorado over the five-year span.

Last season, Frost was the consensus national coach of the year with Central Florida. The season before that, MacIntyre earned the very same honor with Colorado. With the two pitted against each other on Saturday, it will be the first time since 2010 that two national winners have faced each other, coincidentally the same year as the last time that Colorado faced Nebraska.

“What I see here is the ingredients for success and I think our coach is a cut above,” proclaimed McCartney. “I think he’s the real deal. I think he has the character, the discipline, the integrity that you want in a coach,” McCartney said as MacIntyre watched on.

“What we got here right now is special. This guy is special and he’s building something special.”

The last time the Buffaloes marched into Nebraska and won was in 2004. That season resulted in a bowl victory for the Buffs. The season before that, Colorado cruised through Lincoln and peaked at No. 20 in the polls, earning a spot in the Alamo Bowl.

Saturday’s game in Lincoln, Nebraska can be viewed as a defining moment, not just for the players in the locker room, but for CU’s new coach Mac. It is an opportunity, a season-defining moment, a chance to draw first blood in the renewed rivalry.