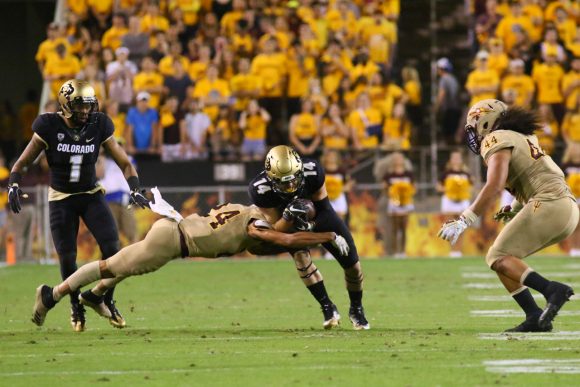 The Colorado Buffaloes kick off the 2018 football season tonight against intrastate rivals, the Colorado State Rams, in Denver at Broncos Stadium at Mile High. While familiar faces such as junior quarterback Steven Montez and senior linebacker Rick Gamboa will be present on the field for Colorado, the Buffaloes will soon showcase some new talent that is excited to make a difference on the field.

Namely, members of CU’s wide receiving corps are chomping at the bit to prove themselves on the field. Senior wideout Jay MacIntyre, a captain on the team this season, is the most tenured member of the collective group.

Last season, he recorded 28 catches for 396 yards. Of players with more than 20 receptions in 2018, MacIntyre had the second-highest yard-per-catch average, at 14.1.

To say that MacIntyre, and for that matter the rest of the receivers on the depth chart, played in the shadow of former Buffs Shay Fields Jr., Devin Ross and Bryce Bobo would be fair.

But now, the latter three are gone. The story at wide receiver this season will revolve around MacIntyre and his fellow wideouts, who are confident but lacking in reps on the gridiron as a unit.

“We feel like we are pretty talented but we know that [together] we haven’t played many games,” redshirt senior wide receiver Kabion Ento said.

Ento’s admission is honest and correct. Colorado’s wide receivers must rise to the occasion every week. Trial by fire, one game at a time, will serve as the only road that will lead to success.

In terms of receiver-quarterback rapport, the signs are looking good. Largely due to a collective offseason effort by Montez and his new receivers to learn to work well together, the Buffs may have a few sleeping giants at the wideout position.

“Their [relationship] is good,” first-year quarterbacks coach Kurt Roper said. “What they did all offseason creates that connection that you need. When the quarterback knows exactly where the receiver is going to be and that receiver trusts where the ball is going to be, it’s endless. Those reps all summer long are huge.”

As a graduate assistant at Tennessee from 1996-98, Roper oversaw Peyton Manning’s development as a quarterback and later, while the quarterbacks coach at Ole Miss from 1999-2004, did the same for Eli Manning.

“I was a young coach at the time and watched Peyton [Manning] develop that [relationship] with guys like Joey Kent, Marcus Nash and Peerless Price,” he said. “It does wonders for your passing game.”

Overall, the wide receiver’s names will be different on the field this year, as will their collective size. For the past few seasons, the Buffs routinely featured quick-stepping, medium-sized wideouts. Fields Jr. and Ross were both under 6-foot. MacIntyre fots that mold at 5-foot-10.

But this season, the Buffs will have a major boost in height at the position. Ento and senior JuWann Winfree stand at 6-foot-3, while sophomore Laviska Shenault Jr. is 6-foot-2.

One thing that the Buffaloes’ wide receivers excelled at last season was pass blocking. Former Buff and current Denver Broncos running back Phillip Lindsay’s career at CU speaks very much for itself, but the aid he received on the far ends of the line of scrimmage always seemed to be overlooked.

MacIntyre in particular proved adept last year at pinning down defensive backs during blocking assignments. He hopes to pass along the merits of getting better in that regard.

“You never know when the ball is going to come your way and when it doesn’t, you have to block; you’ve got to be able to do that as well to be on the field,” MacIntyre said. “If you don’t do it you won’t be on the field. [Co-offensive coordinator and wide receivers] coach [Darrin] Chiaverini really puts a big emphasis on blocking and in my position, a lot of times I have to deal with different roles. I do it to the best of my ability because that’s all I can do when I’m out there.”

More than one person on the inside seems to have the same confidence in the receivers’ ability to get the dirty work done correctly.

“They have been very, very physical in camp,” Chiaverini said. “They [did] a good job in the run game and perimeter run stuff and [also] a good job blocking for the other wideouts. They’ve done a really good job in camp with being physical.”

Colorado, in particular its wide receiving core, should by all indications be more than ready to hit the field and make an impact versus the Rams. Only time will tell, but with a rapport with Montez looking solid, the Buffs’ pass-catchers could be poised to become a nasty unified headache for opposing defenses.