Review of ‘A Quiet Place’: A stunningly silent nerve-wracking thriller 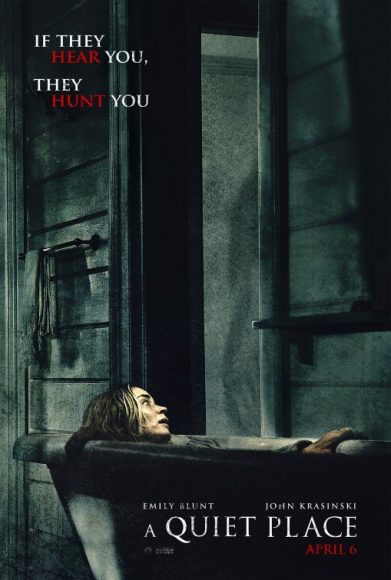 John Krasinski’s A Quiet Place achieved a feeling few horror films in recent memory have — evoking an honest and genuine nerve-shredding tension. A feeling of uneasiness and fear that is intelligently designed to quicken your pulse and focus your attention, it draws you intimately into the eerily quiet nightmare.

For a director new to the genre of horror, Krasinski absolutely nails the visual direction of A Quiet Place. The film opens with the title card, “Day 89” but gives no contextual information, leaving us to piece the story together through clues in the headlines of stray newspapers, walls covered in missing posters and the obvious desertion of a nameless town.

A family cautiously tiptoes barefoot through a dilapidated supermarket silently gathering supplies and medicine. You quickly become aware that sound is avoided at all costs. Offering no immediate explanation as to why.

An unnamed father and mother (Krasinski and his actual wife, Emily Blunt) and their three children communicate though curt sign language. The father puts back a toy rocketship their youngest found, signing to him that it would cause too much noise. As they leave the supermarket you notice they walk single-file along a white sand path. Further reinforcing how dedicated they are to minimalizing their noise.

The family is being hunted by massive creatures of an unknown origin that track their prey aurally. Early in the film, it’s made painfully clear that any sound above a whisper can have sudden and terrible consequences. Knowing this, much of the tension of the film is derived from your anticipation of anything and everything that will alert these terrifying beasts. Krasinski plays with your expectations intelligently, never overplaying his hand.

The film is filled with well-crafted visual details that communicate to the audience the lengths at which this family has taken to alter their lives just to survive. It’s through these little details that the situation feels real. Each character’s motivations are clear and human. You empathize with the family’s struggle, fostering a connection with the characters that makes every little bump or noise excruciatingly tense and unnerving because you care about what happens to them.

The cast in this movie perfectly meshes with their characters onscreen. Krasinski plays a competent, reserved and desperate father who is trying to find any solutions while keeping his family alive day to day. Emily Blunt portray’s his pregnant wife who is planning for the difficult birth of a child in a world without noise. She has to balance this while also trying to provide her children with some semblance of education and expression in a world that that allows little. Their eldest daughter (played by the deaf actress Millicent Simmonds) is deaf, which explains the families familiarity with the use of sign language before the arrival of the creatures. Her inability to hear the creatures creates a terrifying predicament that is reflected when the scene is in her perspective. All sounds cut out, and you can still see what she fails to hear.

A significant portion of this film is unnaturally quiet, as characters primarily speak with each other through sign language and traverse their world quietly. With such limited diegetic sound, the film is frequently broken up by Marco Beltrami’s incredible score. The emotion in many scenes was enhanced dramatically through the use of music instead of dialogue. In the entire film, there may only be 20 to 30 spoken lines.

This made for an incredible and unique theater-going experience. With such a hushed film on screen, the audience knowingly or not, made a definite effort to make as little noise as possible. Popcorn was selected carefully, coughs were stifled and murmured comments were kept to a minimum. The audience became actively and personally involved in the film because any noise made seemed disruptive to those around you. Forget the 3D gimmicks, this was more immersive than pretty much any visually impressive multi-million dollar film.

While this film boasts many outstanding elements, it is not the most complex or logically sound plot. If you start poking holes it will unravel. The creatures, when directly on screen, are one of the weak links in the film. Their behavior is convenient to the plot and they were significantly more frightening when only caught in glimpses.

But that’s honestly fine. This movie isn’t about the creatures. It’s a film about a parent’s desire to protect their children from the inevitable dangers of the world. It’s an exploration of a person’s need for empowerment and expression in life. It’s about the importance of communication with those who you love. A Quiet Place follows the trend of the great horror film Get Out (2017) with themes and motivations that transcend the stereotypes of horror to deliver a powerful and stimulating message.