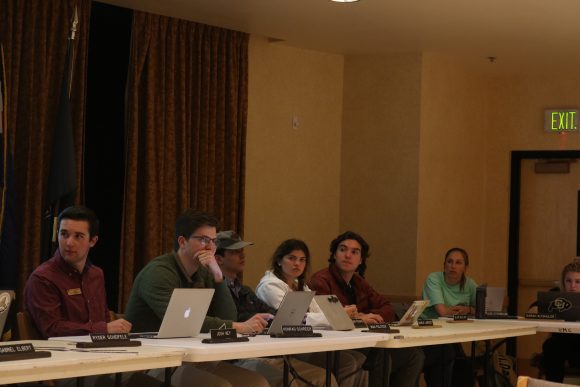 Members of CUSG discuss the chancellor’s decision to reduce their budget and oversight of campus in an emergency Legislative Council meeting on April 4, 2018. (Lucy Haggard/CU Independent)

The CU Student Government is facing the biggest change in its 44 year history: an over 90 percent budget reduction, removal of voting power on funding boards and a “predatory affront to” student voices, according to CUSG’s executives.

Currently, CUSG has a $24 million budget and control of the Recreation Center, UMC and other cost centers. They also oversee the budgets for many student groups, including Distinguished Speakers Board and Cultural Events Board. This decision would limit many of these responsibilities and shrink CUSG’s budget to $1.9 million, according to Troy Fossett, CUSG’s president of internal affairs.

Other changes would shift much of CUSG’s power to the Office of Student Affairs. CUSG would largely function in a non-voting, advisory role, focusing on events for students.

The chancellor told his final decision to CUSG co-presidents during a 15 minute “routine check-in” meeting. The presidents said the decision was not presented as a conversation, rather as a decision that has already been made. Provost Russell Moore was also in the meeting.

“This decision is not a reflection on the current CUSG leadership, nor due to any malfeasance,” the chancellor said in a statement.

The statement from the chancellor released earlier today also said this decision is in “the best long-term interests of our students.” It also cited interest in “keeping up on the maintenance of our student-run facilities,” which according to DiStefano’s statment was not happening.

A $100 fee reduction over two years for all students will result from the decision, according to CUSG. The audience reacted with giggles to the reduction of student fees. Current in-state CU tuition for an Arts and Sciences student, including student fees, is $12,086 for an academic year.

After CUSG’s election debate Wednesday night, students rushed to the UMC for an emergency Legislative Council meeting to consider what was initially two resolutions but later turned into one. Members from various cost centers around campus attended as well. Minutes before the emergency meeting, CUSG candidates debated each other. After the news broke, members of the various tickets running in next week’s elections convened to find common ground and make a game plan.

“They’re focusing on what will happen no matter who gets elected,” said Kelly Galloway, CUSG chief of staff, who observed the meeting.

The resolution, “A Resolution in Defense of Rights of Students,” calls for Chancellor DiStefano’s “immediate termination.” After much discussion and multiple recesses, the clause was stricken.

CUSG’s resolution calling for DiStefano’s termination was initially met with applause. Further discussion and questions from the audience brought up concerns as to whether such a move would cause further conflict.

Student government leaders and students in attendance of the emergency Legislative Council meeting expressed dismay over the lack of student input.

“If the chancellor’s not fulfilling his duties, is this a chancellor that you really want?” Fossett said.

Ciera Dykstra, representative-at-large, said that Representative Council was notified of this decision around 4 p.m. today. She said the language used in the statement is misleading to how CUSG perceives their responsibilities.

“The reason that we go for these jobs is not because it’s a burden,” Dykstra said. “It’s an honor to help choose where student fees go, and it’s extremely manipulative for [DiStefano] to say that.”

Chancellor DiStefano reportedly made the decision in consultation with other Pac-12 schools, according to the document circulated in the meeting and the statement released on CU Boulder Today. CU traditionally has a larger and more autonomous student government than other similar schools, a point touted on CU admissions tours.

“With the largest and most autonomous student government in the United States, this is not okay,” Emily Miller, director of student engagement for CUSG, said.

An additional $250,000 in student fees will be allocated to United Government of Graduate Students (UGGS).

“This is of course going to benefit us, but there is something that itches about how this is being done,” said Juan Antonio Garcia, UGGS president.

Gabriel Elbert, senator of College of Engineering and Applied Sciences, enforced CUSG’s “sworn responsibility to protect our students” shortly before the council took a recess.

“If we fail to meet that responsibility, what exactly are we doing here?” Elbert said.

This story will be updated.