Poet Amal Kassir speaks about the resilience of humanity 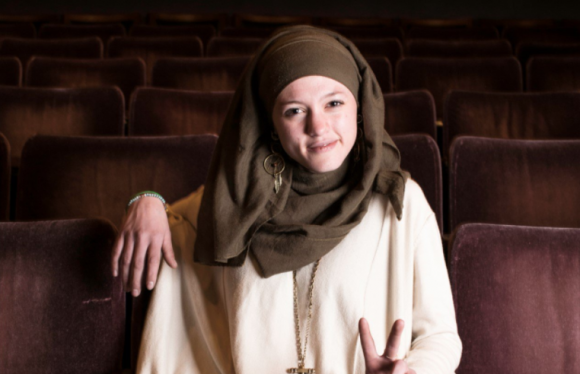 Poet and spoken word activist Amal Kassir and CU undergraduate Heraa Hashmi spoke about their activist work and the importance of recognizing other people’s humanity on Wednesday night.

The Department of Communication and CommRAP organized their annual Josephine B. Jones Lecture series, used to promote Jones’ devotion to lifelong education and community activism. Both female speakers have experience in these areas, as well as similar experiences of being stereotyped due to their religion.

Both from interdisciplinary backgrounds, Kassir and Hashmi told stories about their lives and they discussed injustices to humanity in today’s world.

The crowd was diverse in age and background. Although many students were there for an extra credit assignment, students like Athbi Aljadi, a physics sophomore, were “very excited to hear what they [had] to say.”

Today is the 7th anniversary of the start of the Syrian Civil War. Drawing on this, Kassir reflected on the resilience of hope and how many people in her family in moments of hardship overcame their situations.

“Like zebras when in a lion’s mouth, they will never stop fighting for survival,” Kassir said.

She and her family use various social media outlets to continue hope in times of the Syrian crisis. After presenting her poetry around the world, she concluded that “hope is a human right.”

Heraa Hashmi is a molecular biology and linguistics undergraduate at CU and recipient of the 2017 Muhammad Ali Confident Muslim award. She was confronted with individuals who saw her hijab before they considered her as a person. Using a classroom experience where a peer told her “all terrorists are Muslim,” Hashmi took it upon herself to research and create a spreadsheet documenting all the times Muslims have denounced acts of terrorism.

Using Google Spreadsheet, she gathered 712 pages listing Muslims condemning things with sources. The information, now available online as a searchable database, includes a wide range of examples from acts of domestic violence to 9/11. Hashmi concluded her talk by emphasizing the importance of finding “diversity in the way we communicate.”

Kassir responded to Hashmi’s actions by thanking her, saying it is “inspiring to be around good.” The spirit of humanity feeds into this good, Kassir said, and she shared her own experience at DIA when non-Muslim activists stood guard as her and her fellow protesters prayed. In sujud stance, they were exposed to being harmed. Instead, they were met with astounding applause. Protesting the first refugee and travel ban, DIA became the only U.S. airport protest with no arrests, and it resulted in a federal judge ruling that Denver and DIA must allow emergency 24-hour permits for protests.

“I like to live my day in a way where I feel like I’ve helped someone,” Kassir said at the end of the lecture, reminding the audience that by telling one’s story, whether through databases or spoken word poetry, “we understand [better] what struggle looks like when we communicate with each other.”

Correction: an earlier version of this story said the event occurred on the 8th anniversary of the start of the Syrian civil war, when it was actually the 7th. We regret the error.