A three acre wildfire broke out this afternoon near the First Flatiron and Gregory Canyon on Boulder Open Space, closing Flagstaff Road in both directions at 6th Street to Mile Marker 5.

Multiple agencies are responding to what’s being called the Gregory Canyon fire. No evacuations are in place and no homes are in danger. Without a lightning strike, the fire is considered “human provoked,” according to a firefighter and others at the scene.

At just after 5:00 p.m. the fire was 30 percent contained, according to the Boulder County Fire-Rescue’s Twitter. Boulder Open Space and Mountain Parks shared via Twitter that the trails in the Gregory Canyon and Flagstaff Mountain area are closed until further notice.

Terry Shidner, a local resident, said that he encountered three white, college-aged men below the fire near the Ski Jump trail earlier in the afternoon. Thinking they might have been the ones who started the fire, Shidner and his wife confronted them. The men claimed not to know anything about a fire, despite approaching fire trucks and plumes of smoke rising from where they had scurried from, according to Shidner.

“They were making their way quickly down the slope, not on a trail, right underneath the fire,” Shidner said.

Last March, a transient settlement sparked a fire in the Sunshine Canyon that cost Boulder upwards of $730,000. Colorado is not new to fires, but it’s not as common for them to occur so close to the Denver-Boulder area or at this time of year.

“It’s not totally unusual, but it still has an effect on you,” said Robin Hooge, a resident of the Walker Ranch on Flagstaff Mountain. Her house was included in the evacuation orders from last year’s Sunshine Fire.

This fire is the first of the year in Boulder County. Dry conditions and low snowpack have been fueling wildfires elsewhere in the state.

“[If] you don’t have a lot of snow, the fuel that is sitting on the ground […] is much more available to burn,” said Michael Kodas, acting director for CU’s Center for Environmental Journalism.

Today’s Gregory Canyon fire and last year’s Sunshine Canyons fire are both early for the spring fire season, according to Kodas. He added that while it is “harder to attribute” these out of season fires directly to climate change, it has created conditions for longer fires season.

“The threat that this fire could be very damaging is higher than it might be in a different season,” Kodas said.

There are typically three separate fire seasons throughout the year. One in spring from April-May, one in Fall from Sept.-Oct. and peak season in July. The major factors of a fire’s impact being the fuel it feeds off of. Dry tinder and plants make ripe conditions for fires rage in the dry summer months. 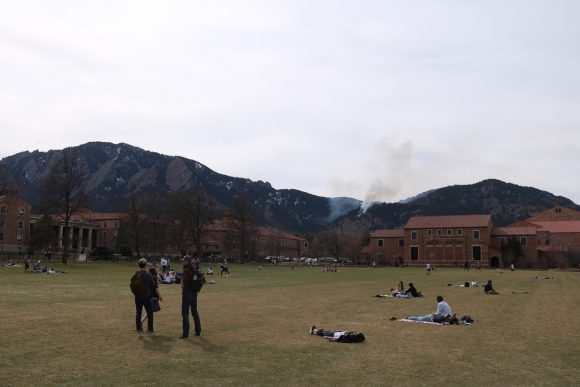 This is a developing story and more information will be posted as it becomes available.

Georgia Knoles and Giselle Cesin contributed reporting from the scene.