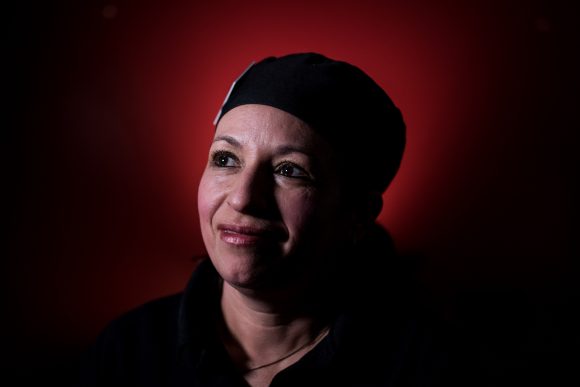 Interviews have been interpreted from Spanish by Erika Manuela Sandoval, organization and employee development manager for housing and dining services at the University of Colorado Boulder.

Nestled in a small prep room in the maze-like Farrand Grab-n-Go kitchen on CU’s campus stands Rosa Cardoza de Gutierrez, preparing sandwiches for the upcoming Monday lunch rush. She methodically smears pesto on halved bread slices before adding peppers and other toppings. She works quietly, occasionally looking over at her friend and coworker, Carmen, who talks with someone else while pairing celery sticks with peanut butter cups. Bachata music plays from the kitchen speaker.

Students coming in to grab a bite between classes wouldn’t notice Rosa preparing their meals in the kitchen. She has a petite frame and dark eyes which convey a sense of sincerity when you speak with her. A warm, motherly presence emanates from her on first appearance. Her demure temperament would not easily lend someone to the idea that she does not sleep well at night, which has been the case for the past several weeks.

De Gutierrez is one of 15 university employees who were granted Temporary Protected Status (TPS) from El Salvador. Immigrants from El Salvador were granted TPS status following the disastrous earthquakes of early 2001, which destroyed over 100,000 homes. These residency permits have allowed roughly 200,000 Salvadorans to live and legally work in the United States for nearly two decades.

On Jan. 8, 2018 the Trump administration announced that it will end TPS for Salvadorans by Sept. 9, 2019. Two days after this announcement, the U.S. State Dept. issued a travel advisory warning individuals not to travel there due to violent crime.

Before this September deadline, current residents must either find a path to obtaining citizenship or risk deportation if they don’t leave the U.S. by that date. This decision was made under the defense that conditions in El Salvador have improved enough since the 2001 earthquakes to allow Salvadorans to return. This, however, is not the case which Salvadorans describe.

“We felt the world turn around,” said de Gutierrez on hearing the news, holding back tears. “As of now, everything looks dark.”

She arrived to the U.S. with her husband in the hopes of providing a better life for her children and out of fear of gang presence, which has since dominated the country. At the time, her children were 6, 7, and 11. After three years of separation, the two were able to bring their three sons to the states with them.

De Gutierrez recounts the years when she and her husband each worked two jobs to have enough money to bring their children — she slept four hours a night.

“It’s been worth it because we’ve been together,” said de Gutierrez.

Her fourth, a 13-year old daughter, was born in the U.S. Her three sons are DACA recipients who also face uncertainty regarding their legal presence, given the uncertainty with the future of DACA and congress’ inability to pass a permanent solution. Since their youngest is not old enough to file an immigrant petition for her parents, the next available alternative is to request that the university, their employer, sponsor them.

“The most important thing is my children and their future. If they could gain some kind of permanent residency…so that they could have the opportunity to stay, that’s the most important,” said de Gutierrez’s husband, who requested not to be named.

He and Rosa have worked for the university for over 15 years, along with Rosa’s niece, Rosario Cardoza, who is now a sous chef in the C4C. Cardoza regularly sends remittances of $300-400 per month back to siblings, nieces and nephews in El Salvador, which allow some of them to attend university there. As a single mother supporting her three children here, she shares her aunt’s legal concerns.

“I feel I’ve given everything and the best of me to this university, I’ve given my best service to the students. It feels unjust that our job and our permits are no longer going to be anything, and everything we’ve given to the university will be nothing, and that we’ll simply just be replaced,” said Cardoza.

El Salvador is consistently ranked as one of the most dangerous countries in the world due to narcotrafficking and rampant organized crime. Named “the murder capital of the world”, street gangs of largely unemployed youth engage in extortion, drug sales, arms trafficking, murder for hire, carjacking, and street crime.

Beyond this, the country boasts low minimum wages that render one-third of the population below the poverty line. Remittances account for one-fifth of GDP. For expats who are over 50 years old, the prospects of finding a new job there should they return are slim to none.

On her most recent advance parole visit back to San Salvador, de Gutierrez remembers being on a public bus where three armed men demanded a U.S. dollar from every passenger. Those who did not have a dollar were beaten on the bus and faced possible death. Fortunately, she says, she had a dollar with her.

Also on this visit, her small-town neighbor was murdered in his own home and his mother severely wounded as his punishment for leaving the gang he was a part of. The problem, she states, is that people are shot at if they do not join the gang, but are shot at again if they try to leave. Compared to the violence seen near the capital, “that’s just little.”

“These are the kinds of issues our employees think about when they go home and they go to bed: “What’s going to happen with my family? Am I going to stay and have to live in the shadows like the rest of the undocumented Americans in this country?”” said Erika Manuela Sandoval, the organization and employee development manager at CU.

Back at the kitchen in Farrand, de Gutierrez keeps these thoughts at bay as she focuses on preparing hundreds of meals for the next round of students. She goes about her business unnoticed, uneasy about whether she will able be to keep her job of 17 years and stay in a country she now calls home.