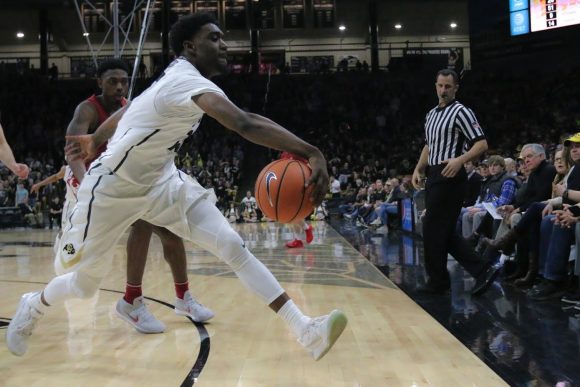 Namon Wright hustles the ball and passes it back into play. Jan. 18, 2018. (Fiona Matson/CU Independent)

The Colorado Buffaloes men’s basketball team rolled into Salt Lake City to face off against the Utah Utes in front of a packed Jon M. Huntsman Center this past Saturday night. The Buffs’ road struggles denied them a season sweep of Utah, as Colorado fell in both teams’ final game before the Pac-12 Tournament, 64-54.

Their second meeting was a tale of two halves. The game was fairly even early on, with Utah holding a slight 8-7 advantage about three minutes in. That was thanks to the Utes’ Justin Bibbins hitting his first two attempts from downtown.

Senior guard George King returned the favor with two triples of his own, but the Buffs still trailed 13-11 with 13:41 remaining in the first half.

An apparent knee injury to Utah forward David Collette appeared to spark a turning point in the contest as Utah went on an 11-1 run, grabbing a 25-16 advantage with just over seven minutes to play in the first.

The Buffs didn’t help their cause as they went 0-of-5 from the field with five turnovers during this pivotal stretch.  Even freshman phenom McKinley Wright IV failed to get going as he only managed four points and two assists in the half.

Utah increased its lead to 39-21 thanks to a 12-0 run as Bibbins, the Carson, California native, continued to frustrate the Buffs’ 2-3 zone when he drilled his fourth 3-pointer of the half.

The black and gold couldn’t buy a bucket. The Buffaloes failed to get good looks at the basket and the game appeared to be slipping away quickly.

Over the final five minutes of the period, the Buffs only managed one bucket, a three-pointer by sophomore forward Lucas Siewert.  The Buffs closed out the first half getting outscored 27-9 over the final 12 minutes and the score stood at 41-24 after 20 minutes of play.

Key factors in CU’s first-half struggles weren’t hard to pinpoint.  The Buffaloes’ defense had no answer for the scrappy 5-foot-8 Bibbins as he scored 14 points on 4-of-4 shooting from deep.

The Buffs shot poorly from beyond the arc, and only 1-of-2 from the charity stripe.  As a result, they suffered debilitating scoring droughts of 5:18 and 4:15.  The Utes, on the other hand, hit on 5-of-9 from downtown and perhaps benefited from some “home cooking,” from 10-of-13 free throw attempts.

Utah’s bench completely outscored the Buffs’ by a 20-5 margin adding to the first half domination.

Mark Johnson, the voice of Colorado sports, said the Buffs would have to go from the “outhouse to the penthouse” if they were going overcome their largest halftime deficit of the season.

In the second half, the Buffaloes stormed out of the locker room with much more focus and determination. Wright IV set the tone early by hitting two quick buckets, ultimately leading to a 6-0 run bringing the Buffs within 11 points.  The two Pac-12 rivals would then trade buckets for the next several possessions and Utah maintained a 46-30 advantage.

Colorado missed several open shots, failing to capitalize on opportunities to get back in the game, as Utah came out of the second half ice cold struggling to follow up their first half momentum.

This was a credit to CU clamping down on defense and not allowing easy looks.  At the 11:40 mark, the Utes had only managed five points at that point in the half, with their main scoring chances coming at the line.

The Buffs showed they weren’t going down without a fight. Led by Siewert, freshman guard D’Shawn Schwartz and Wright IV, the Buffaloes managed to stampede their way back into the game.

They outscored Utah 12-0 with just over eight minutes left in the contest. But just as CU seemed destined for an epic comeback, Bibbins drilled another three-pointer neutralizing the Buffs momentum.

Even as freshman forward Dallas Walton almost brought the house down with a tomahawk slam, the Buffs just couldn’t get over the hump to gain the lead.  With around two minutes remaining, with Utah leading just 53-48, Gibbins drained another three-pointer.

Wright IV would keep it close with an answer of his own, however, Gibbins was relentless from downtown, as he hit one last triple to squash any hopes of a comeback, putting his team up eight with 45.2 seconds to go.

The Buffs showed real toughness holding Utah to an extremely impressive five FG’s in the second half. However, it was not enough to overcome the 17 point first half deficit. Bibbins led all scorers with 24 points including 6-of-11 from three.

Other Utah contributions were made by junior guard Sedrick Barefield as he came off the bench with 14 points and two steals, and freshman forward Donnie Tillman tallied 10 points, four assists and two steals of his own.

For the Buffaloes, Wright IV led his team with 16 points, six rebounds and three assists. Siewert was Mr. Everything, scoring 11 points, grabbing seven rebounds, dishing out two assists, while recording a steal and a block.

King finished with a fairly quiet six points but did lead all players with eight boards.

The Buffaloes now turn their attention to the Pac-12 Tournament taking place in Las Vegas, Nevada next week. No. 8 Colorado will face ninth-seeded Arizona State in the first round on Wednesday.