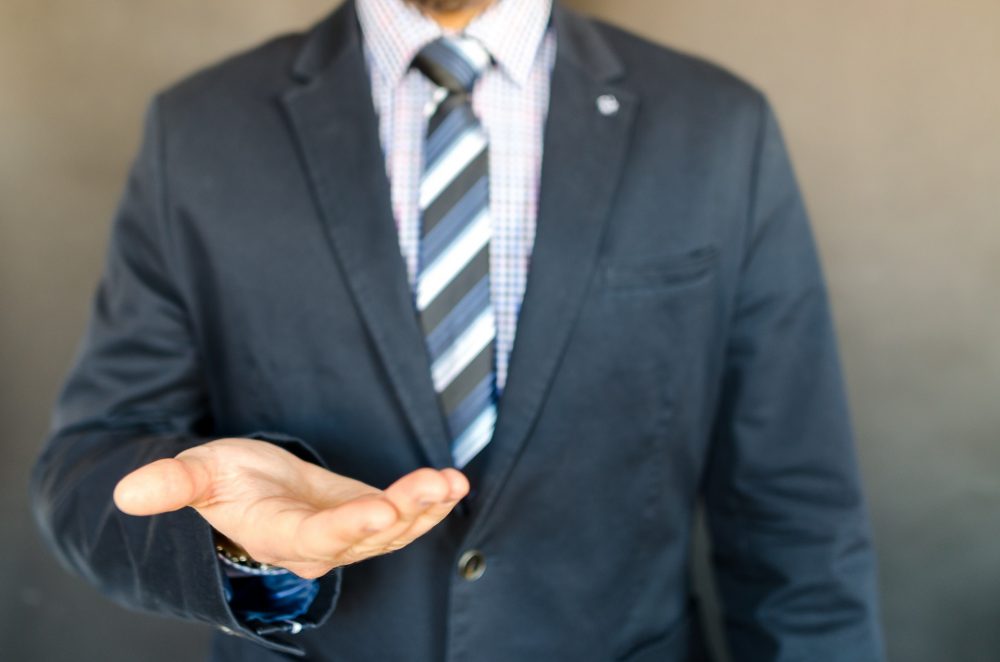 The ten highest paid staff and faculty members at CU Boulder are men, according to a report released by the Denver Business Journal. Published on Nov. 13, the report pulls the data from a public database updated by the university every year.

The list only includes salaries that come from state funding. For example, CU Boulder Head Football Coach Mike MacIntyre works under a three-year, $16.25 million contract with a base salary of $2 million a year and potential bonuses. Employees under contracts like this are not included in the data. 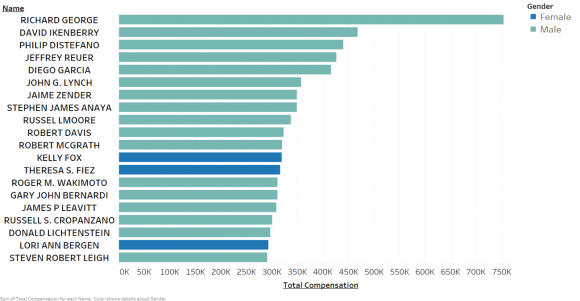 The top twenty earners and their salaries at the University of Colorado Boulder for the 2017-2018 academic year. (Chris Koehler/CU Independent)

While many colleges and functional areas are represented in the top 20, the focus falls on athletics and business, with business faculty and athletics staff comprising half the list.

“Salaries for business school faculty and football coaches have to keep up with the industry standard if we want to compete for the top talent,” said Ryan Huff, CU spokesperson.

Despite this, none of the women represented on the list fall into those areas. Fox, at No. 13, leads the trio. Theresa Fiez, vice chancellor for research and professor of electrical, computer and energy engineering is No. 14. Dean of the College of Media, Communication and Information Lori Ann Bergen comes in at No. 17.

Though close to the cut-off, recently appointed Dean of Leeds School of Business Sharon Matusik does not make the top 20 list, representing the disparities between competing for the top talent in the business arena and the wage gap. Matusik served as interim dean beginning in Jan. 2017 after then-dean David Ikenberry stepped down from the position following three federal discrimination complaints spanning from 2013 through 2015.

Despite stepping down as dean, Ikenberry is still a faculty member at the business school. As a professor of finance, he earns more annually than the majority of CU’s staff and faculty. His salary is nearly double what Dean Matusik earns every year — $230,267 — despite the duo having similar educational and experiential backgrounds.

Huff said that in recent years the university hired more women and diverse candidates for high-level positions, such as deanships and the chancellor’s cabinet.

“Statistically speaking at the national level, more men are in these fields than women,” Huff said. “This is a nationwide trend in that there are few women applying for business faculty positions than men — and universities, including CU, compete heavily for those talented female candidates.”

The CU Independent reached out to Nola Salisbury, a chair member of the Chancellor’s Committee for Women, for a comment and received the same statement provided by Huff.

The trend of competing for talented female candidates is not reflected in CU’s top-earners, and other universities show the same the same patterns. Colorado State University (CSU), the second largest state school in Colorado has a nearly identical top-earning breakdown according to Denver Business Journal.

Beth Walker is CSU’s highest earning female faculty member. As dean of the College of Business, Walker earns $343,000 a year. She is followed closely by Kim Tobin (No. 12), the vice president of university advancement, and Lynn Johnson (No. 14), vice president for university operations and chief financial officer. 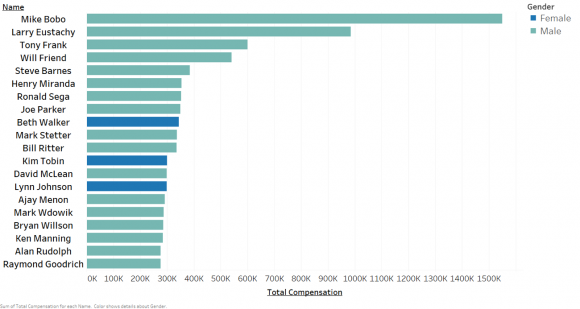 The top twenty earners and their salaries at Colorado State University for the 2017-2018 academic year. (Chris Koehler/CU Independent)

After a report in 2014, which stated women earned 93.5 percent of what their male colleagues earned at CSU, the university’s president, Tony Frank, called for a committee of internal and external experts to determine where the university was falling short.

According to CSU’s  2018 internal study, female and full professors earned 97.8 percent of what their male colleagues made after department and rank were accounted for in the data. Rick Miranda, CSU’s provost and executive vice president, commented on the 2018 results this November.

“Many dedicated faculty and staff across CSU and external collaborators deserve credit for moving us forward with respect to salary equity and we are grateful for their contributions and hard work,” Miranda said. “We are pleased to see these gaps closing with the FY18 study, but it does not mean we can rest in our pursuit of salary equity. It just tells us we are doing better.”

Likewise, CU officials noticed and planned to close the gap as early as 2000. In 2002, the university released an article titled “Male-Female Salary Differences Are Shrinking At CU-Boulder,” which states that former Chancellor Richard L. Byyny had “requested an analysis of salaries by gender, rank and discipline” every year since 1997. The data analyzed in 2002 showed “among instructors, women [were] paid more than their male counterparts.”

“Pay disparity is important to pay attention to for any industry and workplace, including the CU System,” Sarah Rimmel, program assistant at the CU’s Women Resource Center, said in a statement. “Efforts to increase transparency, build accountability and address structural inequities like pay gaps are important to build more inclusive environments.”

Rimmel also said the Women’s Resource Center works in collaboration with the Boulder branch of the American Association of University Women (AAUW) to host salary negotiation workshops, which create an opportunities for CU community members to engage in dialogue around the pay gap and learn about one’s market value.

Stephanie Wood is the Marketing Manager and Assistant Arts Editor. She is majoring in marketing, minoring in creative writing and pursuing three certificates: operations and information management, socially responsible enterprise and technology, arts and media.