Fraternizing with the enemy: Notes on the Washington Huskies 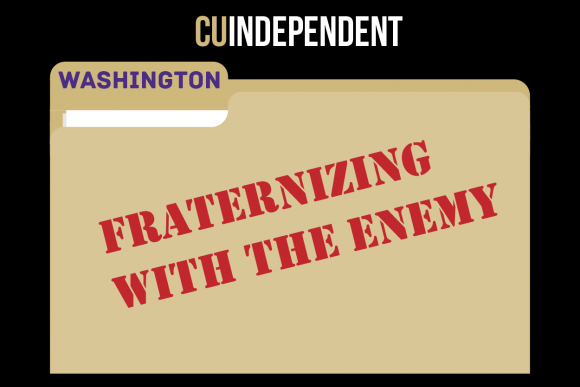 In light of the upcoming match up between the Colorado Buffaloes and Washington Huskies this Saturday, the CU Independent’s Justin Guerriero spoke with Chris Angkico, sports writer at the DailyUW, to get some inside information regarding the 2018 Washington Huskies.

Justin Guerriero: The Huskies snagging an astounding 50 rebounds on the road in Boulder last time these two teams met in January was crucial in UW’s 72-62 win. Is this team capable of repeating such a performance near the glass?

Chris Angkico: To be honest, that’s a toss up. Washington came into the first match up with Colorado last in the conference in rebound margin, and they ended up getting 50 rebounds, which I think was a total surprise to those that follow this team. Noah Dickerson has been tearing teams apart recently, averaging 17.3 points and 9.6 rebounds per game since the first Colorado game, and he’s proven he can compete with anyone in this conference on the boards.

But rebounding has been inconsistent just about everywhere else. Sam Timmins, who is the tallest player on the team at 6’11”, only averages 5.4 rebounds per game and seems to be routinely out-physicaled by anyone he goes up against- not a great sign to say the least. Head coach Mike Hopkins wants guys like Jaylen Nowell and Matisse Thybulle to be more active on the defensive glass so UW can quickly get out into transition, and when this happens, the offense really kicks into high gear. But the Huskies have to make sure every potential board-getter on the other team is accounted for when a shot goes up, which is something this team needs to sharpen up from time to time.

JG: The last two weeks have looked quite peculiar looking in at the Huskies from the outside. After two upsets over Arizona State and Arizona, Washington has dropped its last two vs. the Oregon schools. Where does this team stand right now, as Pac-12 play begins to wind down? Do the Huskies have any momentum heading into this rematch with Colorado?

CA: Officially, Washington is tied with Oregon and Stanford with a 7-6 Pac-12 record and this is about the right place for them considering what has happened recently. The Oregon game was flat-out atrocious, and the worst game that Washington’s played this year by far. Everything that could’ve gone wrong did go wrong. But nobody really thought that we were going to have two more bad nights in a row, considering our excellent performances against the Arizona schools, but that’s exactly what happened. OSU owned the paint against us, a big reason why they were able to overcome a double-digit deficit late in the second half to force overtime.

And against Utah, the Huskies came out with absolutely zero energy in the second half and let the opposition take all momentum away from them en route to the double-digit loss. All of this gives Washington essentially nothing to be energized about by the time they play Colorado. They may get a jump start with Isaiah Thomas in the building for his jersey retirement, but other than that this team doesn’t have much juice at the moment.

JG: Aside from rebounding, what will the Huskies need to do well to comfortably win this week vs. the Buffs?

CA: Simply put, Washington’s biggest priority against Colorado should be coming out with energy in both halves. The Huskies really took their feet off the gas in the second half against Utah, and it showed. The Utes really didn’t make adjustments from one half to the other, it just seemed like UW was devoid of desire for some reason. After the game, Coach Hopkins attributed some of that to the mental drain late in the season, but he said his team has to find that energy somehow. If they don’t, they could be in even more trouble than they are now.

Aside from that, Washington needs to make crisper passes and take smarter shots to sweep the season series against Colorado. On the surface, these things may sound obvious, but against Oregon they seemed very hard for Washington to do. Routine passes were extremely sloppy, and ill-advised threes seemed to be taken on a consistent basis, which prevented the offense from getting into any kind of rhythm or flow. Early in the OSU game, the Huskies ran into some similar problems, but once the offense settled in and got the ball to Dickerson on every possession, the points started flowing, until the end of the game, that is.

JG: Senior guard George King and freshman guard McKinley Wright IV have been the Buffs’ main consistent producers on offense so far this year, with fellow starters Dallas Walton and Tyler Bey showing flashes of consistency at times. That said, recently, the Buffs have gotten much help from guys coming off the bench, namely Lucas Siewert, who’s scored in the double digits in his last three games and Dom Collier, a senior who looks to keep finding his stride. How can the Huskies play an effective defensive game that accounts for all of the Buffaloes’ weapons, both starters and bench guys?

CA: It’s been proven time and time again this season that Coach Hopkins’s 2-3 zone works, despite the UW’s recent struggles. King and Wright both went for double figures the first time around, but they shot a combined 9-for-29 to get there, so I’d say the defense did its job. Bey did have an efficient game against us with 14 points on 5-for-9 shooting, so he’s definitely someone to watch out for, and Siewert obviously had a huge game against Stanford with his 17 points and four three-pointers.

Washington needs to defend the high post area well and make sure that guys like Dallas Walton are contained inside. Tres Tinkle of OSU had a field day from the high post, a big reason why UW couldn’t pull out the win. Walton shot 6-for-13 in the first matchup, and the Huskies need to make sure that he doesn’t become another Tinkle. Washington’s recipe for success should involve limiting Walton’s impact on the game and making quick rotations out to the Colorado shooters. But the other big element, as I touched upon earlier, is having the energy and desire to play tough defense, and it remains to be seen if this team can maintain that defensive intensity with all of the losses wearing them down.

JG: With the Pac-12 looking a lot tighter than in recent memory, how far can this Huskies team advance in the Pac-12 tourney? Furthermore, what’s the feel on campus/in the locker room? Is there an expectation to make the NCAA Tournament? What do you think is the limit for this Huskies squad?

CA: I think that the students on this campus really, really want to keep the faith in this team, but these last three games have certainly made it difficult. After Washington’s disastrous season last year, Coach Hopkins’ culture change has rubbed off on everyone, from the players to the Dawg Pack to the Seattle area in general. People are more invested in the fate of this team than they have been in a while, because they know that getting to the big dance is something that’s still within reach, even though the team hasn’t done itself any favors. In terms of the Pac-12 tournament, the Huskies have proven they can rise to the occasion and beat the conference’s best teams, which would serve them well should they get to the later rounds. But the back-to-back losses in Oregon and the Utah loss are serious causes for concern.

From my viewpoint, Washington has to play almost perfect basketball here on out to elicit serious consideration from the selection committee, and this might be tough considering that three of the team’s last five games will be played against teams they’ve already lost to, including Stanford and the two Oregon schools. To answer your last question, I think that the sky is still the limit for this Huskies team, but the problem is that they have to get out of their own way and play sharper on both ends of the floor. Can they do it? That remains to be seen.