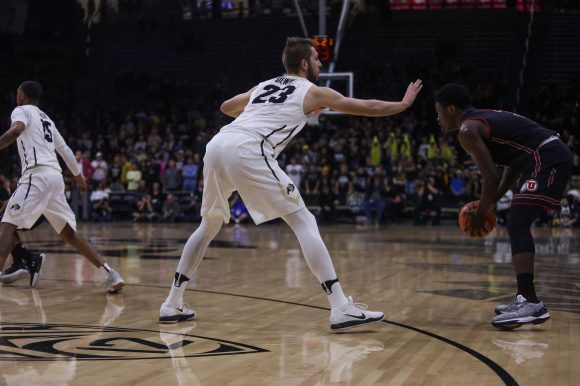 The Colorado Buffaloes (15-10, 7-6 Pac-12) took care of business on Sunday and defeated the Stanford Cardinal, 64-56, ending a three-game homestand.

The Buffaloes extend their winning streak against the Cardinal to nine games in a row.

Colorado’s win was in large part to solid performances by the team’s younger players. Sophomore forward Lucas Siewert netted a career-high 17 points on 5-of-7 shooting which included 4-of-6 from beyond the arc. He snagged seven rebounds in the process.

Siewert hit two crucial threes in the last three minutes of the game to help widen the Buffs’ margin from four points to 10.

“Last year I had my career-high against Stanford too,” Siewert said after the game. “I thought about that so that kind of gave me some confidence . . . I want my performance today to be the standard on how I should play going forward.”

Colorado had a large task on its hands as they went up against Cardinal forwards Reid Travis and Michael Humphrey. Stanford’s frontcourt duo averaged 30.1 points and 15.2 rebounds combined heading into Sunday.

The Buffs came out with good energy on the defensive side of the ball. They allowed the Cardinal to only shoot 25 percent from the field in the first eight minutes of the game.

Colorado also forced Stanford to turn the ball over four times during that stretch. Stanford ended up shooting 36 percent from the field on the night.

“It’s the third time in a row we’ve held our opponent to less than 40 percent, which is something that we hang our hat on,” said head coach Tad Boyle.

The Buffaloes were cold shortly thereafter, going scoreless for the next six minutes as Stanford cut an early Colorado lead to just one. But a 9-0 run put the Buffs back where they wanted to be as they went into the halftime break leading Stanford, 31-20.

Colorado held Stanford to shoot only 29 percent in the half.

The Buffs also kept Travis in check as he had six points on 2-of-5 shooting and three rebounds for the half. He would finish with 10 points on 4-of-10 shooting with six boards.

Wright IV started out the half by sharing the ball effectively as he claimed two assists in the first two minutes. Despite shooting 4-of-15 from the field, the young phenom from North Robbinsdale, Minnesota ended up with 10 points, six rebounds and seven assists. It’s his ninth game this season in which he’s ended up with at least seven assists and is now eight away from Chauncey Billups’ freshman record.

“Having guys who can stretch out and shoot it is a big part for us,” Wright IV said. “Those guys do a good job [of] letting me know that they’re open. I just find them and I trust them.”

With 15 minutes left in the second half, the Cardinal responded to an 11-point deficit by getting hot from downtown. Thanks to the marksmanship of senior guard Dorian Pickens, Stanford at one point shot 57 percent from three in the half.

Bey provided a spark after Stanford’s hot streak as he gave the Buffs back-to-back baskets coming out of a previous timeout. He would end up fouling out with nine points on 4-of-7 shooting with six rebounds in 18 minutes of play.

“I was just going with the flow of the game,” Bey said. “Coach told me to go to the boards as many times as I can. Me going to the boards and rebounding was a big part for the team.”

The Cardinal started to cool down from deep and the heroics from Siewert came into play down the stretch. He ended up with a career-high seven rebounds on the night as well.

“Coach challenged me to do better on the glass after the Cal game,” Siewert said.

Siewert’s 17 points was the team high for the Buffs while senior guard George King snagged a team-high nine rebounds. Wright IV led Colorado in the assists department with seven.

Stanford’s Pickens ended up with a game-high 18 points on 5-of-15 shooting and 4-of-9 from beyond the arc.

After winning three straight games at home, the Buffaloes will start a two-game road trip in the state of Washington as their hopes of making the NCAA tournament largely lie in the balance.

“Going on the road, these are two huge games that we’re really confident going into,” Wright IV said.

The Buffs will first take on the Washington State Cougars in Pullman, Washington Thursday night. Game time is scheduled for 9 p.m. MST and will be aired on Pac-12 Network.