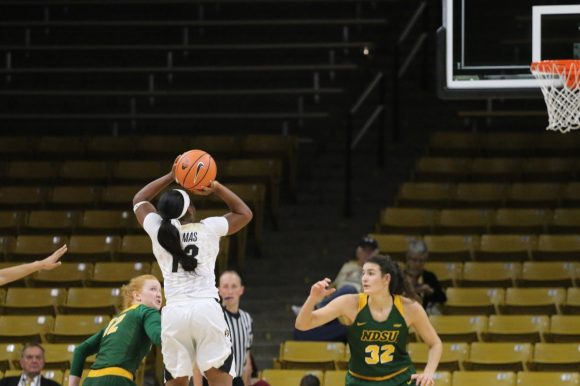 The University of Colorado Buffaloes women’s basketball team took on the Dartmouth Big Green at the Coors Events Center on Monday evening. The Buffs were winning for much of the game, but a fourth quarter rally allowed Dartmouth to get the best of the CU and pull out a 81-75 win.

“We knew that this was going to be a really difficult game,” head coach JR Payne said after the loss. “The foundation of our success comes from defense and rebounding, and I don’t think we did those as well as we needed to do tonight to be successful.”

Leonard was able to get her teammates going however, as she finished the first quarter with five assists, which tied a career-high. One such pass set up freshman guard Aubrey Knight as the quarter was ending. The buzzer-beater put the Buffs up 20-19.

Dartmouth’s Kealy Brown hit a three-pointer just nine seconds into the second quarter to put the Big Green back on top.

Freshman forward Annika Jank was the Buffs’ main weapon in the first half. She tallied 19 points on 7-of-10 shooting.

Leonard, despite finishing the first half with six assists, had just two points in the half. She was cold from the floor, failing to convert any of her seven shots.

CU attempted to shoot beyond the arc in the first half, but possibly to a fault. The Buffaloes went an abysmal 1-for-12 from three-point range in the first half, including five long range misses from Leonard. The failure seemed to impact the team’s shooting in the second half, as the Buffs collectively took just two more shots from long range.

Leonard cashed in the majority of her points from the free throw line, going 9-of-10 from the charity stripe. She finished with 15 points, seven rebounds and eight assists.

Heading into halftime, the Buffs were up 40-34.

Jank’s offensive rhythm in the second half paled in comparison to her first half, as she followed up a 19-point offensive showing in the first half with just seven more the rest of the way. She led all scorers in the game with 26 points.

The Buffs shot their best in the third quarter, making 57 percent of their baskets, while Dartmouth managed just a 31 percent make rate.

But everything changed in the fourth quarter.

The Big Green kept inching closer. The game was tied at 64 with just under five minutes left to go. Dartmouth guard Cy Lippold turned it on, coming up huge with a couple buckets, some flashy dimes and a timely steal that led to the tying basket.

The Buffs just couldn’t find an answer from her. She scored 24 points in the game and totally came alive in the final 10 minutes, hitting critical free throws down the stretch.

“She’s quick and little and she gets in the lane,” Leonard said. “She … drops it to the post players and started to hit shots in the fourth quarter. It just starts with defense.”

On a key possession with the Buffs trailing 66-64, Bunn took it to the rack hard and finished the bucket through contact. She missed the free throw however, and the score remained 66 all.

Down 70-68 a few minutes later, Bunn earned another trip to the line and had a chance to tie the game, but missed both free throws. She finished 1-for-6 on the night from the charity stripe. From the 2:57 mark in the final quarter, Dartmouth retook the lead and did not relinquish it.

However, after a Leonard turnover, Jank answered the call and splashed home a three to make it a one possession game with under a minute to play.

The Buffaloes were outscored 29-16 in the last quarter and were burned by Dartmound, who nailed nearly 63 percent of their shots when it mattered most.

“There was no fear in [the Big Green’s] minds,” Payne said. “They came out here … and let the chips fall. They definitely knew they were in a ball game they could win.”

The loss spoiled a particularly spread offensive output from Colorado. Along with Leonard and Jank, Bunn and junior guard Alexis Robinson scored in the double digits, contributing 15 and 11 respective points.

The Buffaloes will next face Air Force on the road on Friday, Dec. 15. Tipoff is at 7 p.m.