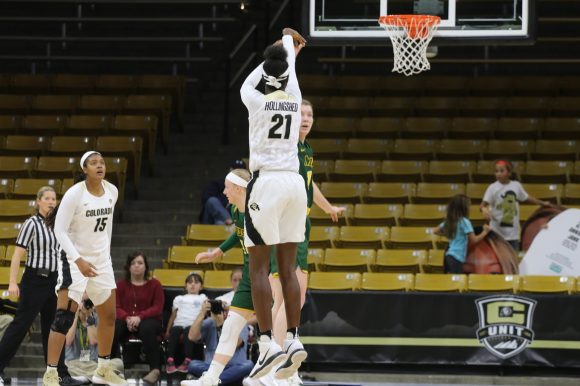 The Colorado Buffaloes women’s basketball team prevailed on the road against in-state rival Colorado State on Wednesday night. They  defeated the Rams, 70-67, despite an impressive fourth quarter rally by CSU.

CU led by as much as 15 in the final quarter of play, but the Rams mounted a furious comeback. After Colorado took a 64-49 advantage with just under nine minutes left in the game, the Rams managed to hold the Buffaloes scoreless until the three minute mark.

At that point, the Buffs still led 65-55, but worse was yet to come. The Rams scored nine unanswered points, and with just 22 seconds left, lowered their deficit and trailed Colorado 66-64.

The Buffaloes never relinquished their lead, however, and forced CSU into a fouling spree to slow the clock down. Two clutch-free throws by senior guard Brecca Thomas cushioned CU to a 68-64 lead, but shortly thereafter, the Rams’ Callie Kaiser nailed a three-pointer, making the score 68-67 with nine seconds to go.

Luckily, junior guard Kennedy Leonard stayed calm at the free throw line in the final seconds, making both shots and elevating Colorado to a 70-67 victory.

The Buffs survived despite shooting just 19 percent from long range and 39 percent overall from the floor. Both of those figures were bested by CSU, as the Rams drilled an eyebrow-raising 9-of-17 shots from beyond the arc and also converted 45 percent of their shots from the floor.

CU got a major boost from freshman forward Annika Jank, who led the team with 22 points on 9-of-15 shooting. Jank recorded a double-double in the win, as she snagged 10 rebounds in Fort Collins.

Leonard was next on the squad with 18 points. Senior center Zoe Correal was the final Buffalo to score in the double digits, scoring 10 points in the victory.

The Buffs (7-1) and Rams showed signs of dominance in different quarters. CU led after 10 minutes of play, 24-13, while Colorado State played a solid second quarter, outscoring the Buffs 22-12.

It same story played out in the final 20 minutes. The Buffs seemed poised to cruise to a comfortable win after outscoring the Rams 25-13 in the third quarter. But disaster nearly struck the team in the fourth quarter thanks to a nearly six-minute scoring drought. Overall, CSU was the better team in the quarter, scoring 19 to Colorado’s nine.