Fouls and turnovers plague both sides in Buffs’ win over DU 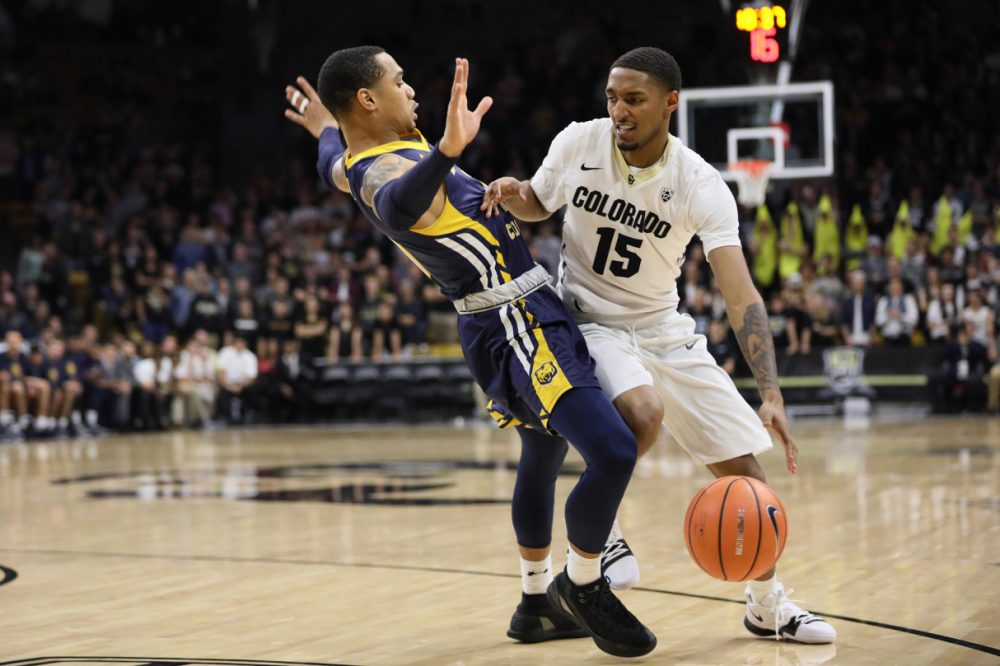 Senior guard Dominique Collier charges toward the basket during the second half of play at the Coors Events Center. Nov. 10, 2017 (Nigel Amstock/CU Independent)

As the Colorado Buffaloes men’s basketball team rolled to an 89-62 victory over the visiting Denver Pioneers, two big problems stuck out for both teams.

In an otherwise strong game (Colorado won the rebound battle for once!), the Buffs found themselves matching their opponents in both fouls and turnovers.

The whistles started sounding early and often at Coors Events Center. Both teams played physical defense, perhaps a little too physical for the refs’ liking.

DU started a trend of personal fouls by committing three on one of Colorado’s first possessions. The Pioneers continued to rack up calls in the paint, collecting 10 before the end of the first half, putting the Buffaloes in the double bonus.

Not to be outdone, the Buffaloes managed to commit 10 fouls of their own in the first half. This gave Denver the double bonus as well.

The foul trouble didn’t stop in the second half either. The Pioneers and Buffs were whistled 13 and 12 more times, respectively. There were 45 total fouls on the night.

With both teams hesitant to shoot the three, most of the scoring took place in the post. Defenders were increasingly frustrated and physical close to the basket. Denver in particular was having trouble stopping strong drives from CU’s guard tandem.

Freshman guard McKinley Wright IV and sophomore Deleon Brown were both excellent laying it up down low, as was senior forward George King. The Pioneers couldn’t find an answer. Often, they resorted to fouling.

“We knew that it was going to be that type of game,” said DU head coach Rodney Billups after the game. “When you deal with officials at this level, the fouls that we call in practice aren’t the fouls that we get in the game. Our guys didn’t do a good job of playing to the referees.”

Colorado had its own frustrations trying to stop Denver’s 6-foot-10 center, Daniel Amigo. Amigo made plays all over the court, forcing CU’s defense into a difficult position.

Thankfully, the fouling didn’t escalate into any violent situations and no technicals were assessed. Through all the calls, somehow only one player, Denver’s Christian Mackey, fouled out.

Turnovers were also abundant for both squads. The Pioneers struggled with travelling in the first half and the Buffs were whistled for it a handful of times as well. Errant passes also plagued both sides as fans, cheerleaders and even Chauncey Billups himself were all forced to dodge incoming basketballs.

Denver did lead Colorado in the steal department, snagging six to the Buffs’ four. All told, CU had 13 total turnovers while Denver had 11. The Buffs took better advantage though, scoring 12 points of turnovers compared to Denver’s eight.

“A lot of the turnovers are just post-feeding, passing and catching,” said head coach Tad Boyle in the post-game press conference.  “Just maybe some inexperience, but post-feeding is not a strength of this team. We had a couple of silly turnovers … silly ones we’ve got to take care of.”

The Buffs will look to iron out both of these problems as they get ready to take on the Quinnipiac Bobcats on Friday. That game will tip off 4 p.m. from the Vines Center in Lynchburg, Virginia.