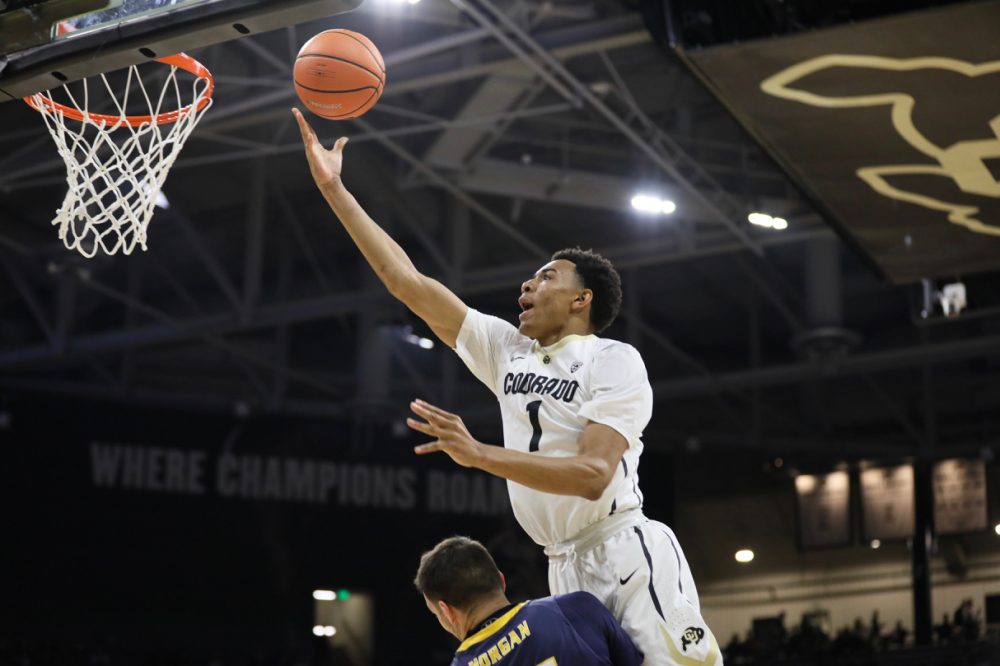 Freshman guard Tyler Bey floats the ball toward the basket early in the first half of play at the Coors Events Center. Nov. 10, 2017 (Nigel Amstock/CU Independent File)

Coming off a victory against the Northern Colorado Bears last week, the Colorado Buffaloes stayed perfect against in-state opponents as they defeated the Denver Pioneers, 89-62, on Tuesday night at the Coors Events Center.

The Buffs got into the bonus with 14:41 left to play in the first half, thanks to Denver committing seven fouls. The Pioneers were forced to be less physical due to their foul troubles and it gave the advantage for a more physical Colorado team.

So far this year the Buffaloes have been bullied near the glass early in games. On Tuesday, however, Colorado wasn’t getting outrebounded in the first half like it has, including in the Colorado Mines exhibition).

Despite going up against Denver’s 6-foot-10 senior Daniel Amigo, who scored 22 points on 10-of-20 shooting from the field, he only claimed two rebounds and Colorado was able to win the rebounding battle.

“He is a very good player,” said freshman guard McKinley Wright IV. “Having a guy on their team was tough, but I think Tory [Miller-Stewart] and the rest of our team did a good job, even though he hit some tough shots. Credit to him, but I think our guys did a good job overall.”

“Our big guys did a good job in the second half,” said junior guard Namon Wright. “It’s all about boxing out the other guy and contesting the shot to make it harder.”

In spite of the Buffs’ rebounding success, Denver shot an alarming 56 percent from the field in the first half and the Buffaloes knew they couldn’t let the Pioneers keep up their solid shooting rhythm. Colorado led Denver 43-33 at the intermission and looked to lay the hammer down on the Pioneers in the final half.

In the second half, Colorado clamped down defensively and dramatically decreased Denver’s shooting percentage to 30 percent. Despite the improvement on the part of CU’s defense, head coach Tad Boyle still seemed far from satisfied.

“When we contest shots high, good things happen,” he said. “For the most part, the shots that were going in for them were layups or they were uncontested shots … I thought we did a poor job of that for the majority of the game tonight.”

Boyle was very encouraged to see production from Brown in particular.

“I’m really pleased with his aggressiveness,” Boyle said. “Him attacking the basket, his defensive intensity. There’s no doubt Deleon Brown is finding a niche on this team and securing himself more playing time as we go down against maybe more formidable opponent.”

For back-to-back games, King led the Buffaloes in rebounding. He recorded seven versus DU but had some friendly competition.

Sophomore forward Lucas Siewert claimed the same number of rebounds as well,  and his numbers seem to be showing promising signs for the young Brazilian.

“Lucas has come along,” Boyle said. “If there’s a really pleasant surprise with this team, it’s the play of Lucas Siewert. Great strides can be made between your freshman and sophomore years, and I think [Siewert] is showing that [he’s] made some strides.”

“Chauncey has been one of the greatest players and point guards of all time,” Wright IV said. “Coach told us that he would be here yesterday and I think that gave us all a motivation to try and impress him.”

The Colorado Buffaloes will travel to Lynchburg, Virginia, to compete in the Paradise Jam. The Buffs’ first game will be played against the Quinnipiac Bobcats on Friday, Nov. 17, at 4 p.m.