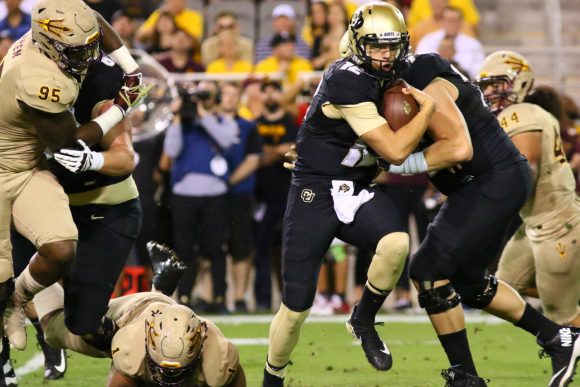 Sitting at 5-5 with two games left, the Colorado Buffaloes need one more win to attain bowl eligibility. Standing in the Buffs’ way this week are the No. 11 USC Trojans, whom Colorado hosts this Saturday, Nov. 11.

In preparation for the matchup, the CU Independent’s Jack Stern takes a look at how the Buffs will fare.

Two weeks ago, it looked like the Buffs offense finally turned the corner, putting 37 points on the scoreboard and accounting for over 550 yards of total offense against the Cal Bears. Last Saturday against Arizona State however, the wide receiving corps went back to its old inconsistent ways — making impressive plays in some instances, but dropping the most catch-able balls in others.

The one consistent element for CU’s offense has been senior tailback Phillip Lindsay. The Tasmanian devil ranks fourth in the country in rushing and hasn’t shied away from carrying the bulk of the team’s workload.

Against a talented Trojans defense though, Colorado’s offense could be in for a rude awakening. Led by linebacker Cam Smith in the middle, and talented defensive backs Iman Marshall and Jack Jones, the Buffs’ offense might struggle to move the ball consistently.

Expect Lindsay to once against yield a heavy workload. But behind a banged up offensive line that recently lost Tim Lynott to a season-ending torn ACL, Lindsay having the same level of success he’s had against the likes of Arizona and Oregon State seems improbable.

To make matters worse, Colorado will have to deal with the Pac-12’s sack leader in Trojan defensive end Rasheem Green.

The Trojans should get enough penetration upfront to keep Lindsay’s production to a minimum. He’ll get his fair share of carries and ultimately ware the defense down. Don’t be surprised, however, if he’s not the game changing player in this contest that he’s been in the past. Lindsay is a Tasmanian devil, not Superman.

Jones and Marshall have the potential to do an excellent job containing Shay Fields, Jr. and Bryce Bobo, who have both struggled with drops and shown an inability to get open at points this season.

Overall, USC’s defense will do a good job of keeping the Buffs point total to a minimum.

The USC Trojans offense is loaded with some of the best players in the country. At quarterback, redshirt sophomore Sam Darnold projects to be a first round pick in this year’s NFL Draft, should he decide to declare. At running back, Ronald Jones has shown insane burst and explosion, and backup Stephen Carr has looked impressive as well.

At wide receiver, they have Deontay Burnett, who ranks fourth in the conference in receiving yards, plus Steven Mitchell and Tyler Vaughn to compliment him. USC’s offense also ranks inside the top three in the Pac-12 in scoring and total offense.

On defense, it seems like the Buffs simply don’t have the tools to combat USC’s firepower. CU ranks second to last in the conference in rushing defense, and has been thrashed multiple times this season.

Last weekend against a mediocre ASU rushing attack, the Buffs let up nearly 400 yards on the ground. Throughout the season, the Buffaloes’ defensive 11 has allowed career games to Arizona’s Khalil Tate, Washington’s Myles Gaskin and OSU’s Ryan Nall.

This team hasn’t stopped the run all year long and it’s no secret. Don’t expect a flip of the script against USC. The Trojans will likely pound the ball right at the core of the Buffs defensive line early and often. If the Buffaloes can’t stop the run, it’s going to be a long day on Saturday.

USC’s talented tailbacks should open opportunities for Darnold once the Buffs start stacking the box. He should have one-on-one matchups with all his receivers which will allow them to move the ball through a variety of routes.

Junior defensive back Isaiah Oliver has missed the last two games with an undisclosed leg injury and shouldn’t be 100 percent on Saturday. Likewise, Dante Wigley struggled mightily in Tempe vs. N’Keal Harry and Trey Udoffia, who’ve been hot and cold too, and is likely to get picked on extensively by Darnold.

No matter how you look at it, the Trojans have a plethora of weapons at their disposal. There’s no reason to think they won’t score points through the air, on the ground and in bunches.

Synopsis: Ultimately USC should win this game by a comfortable margin. Yes, lackluster teams in the Pac-12 have in a few cases defeated the goliaths of the conference, but the Trojans’ strengths play right into CU’s weaknesses.

They can utilize a run-heavy offense, have great deep threats down the field, host one of the best signal callers in the country and have enough playmakers on defense to contain the Buffs for four quarters.

The Buffs and Trojans kickoff from Folsom Field at 2 p.m. MST on Saturday, Nov. 11.