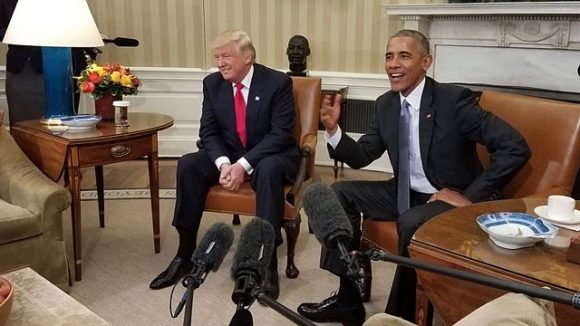 I still remember the chilly, mid-Atlantic fall day my parents took me to “help them” canvass for Chris Van Hollen, current Democratic Senator for Maryland, in his first Congressional race.

It was 2003. At the tender age of seven, it was the first experience of my life that could be considered remotely “political.” It was also the event that led me to the basis of my political ideology and made me realize whose side I wanted to be on: the side of everyday, ordinary people.

As often as we hear Republicans refer to “everyday folks” and “regular hard-working Americans,” in reality it is the Democrats whom I have always felt are more concerned with the well-being of the people characterized by these terms.

But the Democratic party of late has shown an inability to step up to the plate in a productive and nuanced way, especially in regards to their reactions to Donald Trump — as a candidate and as president. Because of this, I find myself feeling greater sympathy for traditional conservative ideology than ever before.

The distinction between “traditional conservative ideology” and “Republican ideology” is an important one. The Republican party of today has no ideology. It has been co-opted by Donald Trump.

Senator Jeff Flake of Arizona, one of the few tried-and-true conservatives that remain in public office, recently made a speech to announce that he will not run for re-election. In the speech he also lambasted President Trump and scolded Republican colleagues for abandoning their “core principles” in the interest of electoral security.

Other members of Congress who I consider traditional conservatives have made similar comments, albeit less emphatically.

Republicans are not wrong to be particularly worried about the safety of their seats in the Trump era. Trump and his surrogates have actively sought to quash dissent within the party and explicitly threatened some members with their incumbency prospects when they chose to speak out against the administration.

Within the first year of his presidency, Trump has personally attacked 20 percent of all Republican Senators, not to mention the House, state and local representatives who he has targeted as well.

President Trump’s successful candidacy was based, in large part, on his appeal to those  he referred to as “real” or “forgotten” Americans: white, working-class voters. His blatant pandering to this demographic group should have been viewed by Democrats as the perfect opportunity to consolidate their support within this group, which had been unreachable to them for decades.

The white working-class was lectured about the value of hard work and personal responsibility by a man who failed to exhibit either. But, just as they have chosen for years to ignore the decline in their share of white working-class support, the Democratic party took a different route in 2016.

Many Democratic politicians including, most importantly, 2016 presidential candidate Hillary Clinton, have developed an expertise in what is known as “identity politics.” This term is used to describe the act of appealing to, or associating with, a group of people simply because of their identity.

Of course, minorities in America do receive disproportionate treatment by our justice system. And that discrepancy must be addressed appropriately.

But consider the difference between these two approaches in how they are received by people who do not belong to marginalized identity groups. They likely feel that the politician who is constantly referring to the need to solve problems for minorities isn’t concerned with their problems. And why would they vote for someone who mentions key issues — many of which resonate with their own — only in the context of minority oppression?

Donald Trump may have been insincere and even dishonest in his appeal to the white working class, but at least he felt it was necessary to mention them at all.

Relatedly, Republicans have become the defacto party of defending our borders. Because of the Democrats’ steadfast commitment to protecting the dignity of minorities, they have been blinded to the harmful effects of replacing logical, sound arguments in favor of immigration with the now-stylish practice of virtue signaling.

We should all realize the value that immigrants bring to our country. We should denounce unequivocally true xenophobia wherever we find it. Democrats are right in speaking out against falsehoods commonly used by Republicans, like the assertion that immigrants commit more crime than native-born citizens, or that they are an overwhelming financial burden on American taxpayers.

But this does not mean that we should refuse to even acknowledge the legitimate arguments against mass immigration, like the replacement of American workers with immigrants who are willing to accept less pay. To say, as Democrats often have, that we should allow immigrants into our country because it is simply the only morally justifiable option available is both disingenuous and counterproductive.

The failure of Democrats to honestly address the issue of immigration has driven many people concerned with it to support unrealistic solutions, such as the building of a southern border wall.

Perhaps the most concerning development within the Democratic party is their refusal to adequately protect free speech.

President Trump has taken anti-free speech rhetoric to a new level, threatening to silence journalists who are critical of him and calling them “fake news.” However, the attacks on the freedom of speech have overwhelmingly come from the left.

There has been a surge in attempts by “liberal” college students to shut down speakers they deem offensive, and wishy-washy administrators often give in to their demands. Forty-three percent of students believe they should have the right to ban extreme speakers from campus and 71 percent say colleges should prohibit racist and sexist speech on campus.

These opinions set a dangerous precedent. What many people consider “extreme,” or even “racist” or “sexist,” varies across context and history. The very idea of democracy was considered extreme for most of human history, let alone racial equality and women’s rights.

Black Lives Matter, for example, is considered extreme by many people (fairly or otherwise), yet universities regularly book speakers who are outspoken supporters of the movement. There have even been some instances where criticism of the group was censored. This illustrates a clear double standard at play.

Democratic representatives have done little to bring attention to the problem. After the violent riots that took place at UC Berkeley designed to shut down right-wing provocateur Milo Yiannopoulos, the reactions by prominent Democrats were disappointing to say the least. Almost all of them rightly condemned the violence at the event, as well as President Trump’s threat to withdraw federal funding from the university. However, they failed to bring attention to the wider problem of intolerance for opposing views by speaking as if what happened at Berkeley was an anomaly.

If Democratic representatives aren’t willing to stand up for intrinsically liberal values like free speech, then the party is doomed to continue to alienate its supporters until the only ones left are the gold medalists in the oppression olympics.

Apart from the shortcomings of the Democratic party, Trump’s ascension to power has opened my eyes to the merits of traditional conservative ideology.

One stance that I have long criticized conservatives for pushing was the idea of executive overreach. When former president Barrack Obama was in office, small-government Republicans continuously referred to him as a “dictator” or “king” for signing the occasional executive order and passing Obamacare.

I never saw these attacks on Obama as legitimate, but I do think they apply to our current commander in chief. President Trump, the mastermind behind The Art of the Deal, has been unable to make any substantive arrangement with Democrats, or often with members of his own party, to forward key elements of his agenda. In what seems to be a response to these shortcomings, Trump is on track to sign more executive orders in his first year of office than any president in the past 50 years.

Since I mostly agreed with the policies proposed by President Obama, I never complained, as some did, of executive overreach. But the inaugural year of a Donald Trump presidency has demonstrated to me the potentially negative consequences of executive power.

The classic Republican mantra of protecting states’ rights has also made a newly positive impression on me.

I always considered the concept of states’ rights more of a political tool than a coherent ideology. From being used by the Confederacy as a main tenant for their (publicly stated) argument for seceding from the Union, to more recently when Republicans used it to resist the legalization of gay marriage, it seemed to be a way for backwards-minded people to fight progress.

President Trump’s idiocy has opened my eyes to the potential merits of this viewpoint. Just as religious conservatives supported breaking rank with the federal government on gay marriage, I wholeheartedly support state dissent regarding a variety of Trump’s policies. The decision to revisit the DACA program has been challenged at the state level. And several of his travel bans have been struck down by state Attorney Generals. Furthermore, states such as New York, California and Washington have pledged to maintain their commitments to the Paris Climate Accord, despite Trump’s announcement earlier this year that he would withdraw the U.S. from it.

The refusal of states to adhere to federal policies was frustrating to me when the candidate I voted for was in office, but the practice is much more appealing when a game show host is running the country.

I often ponder how differently my life and my political ideology would have materialized had my parents instead been supporters of Senator Van Hollen’s Republican opponent. Until recently, I would have answered this question by saying that I’d be a completely different person. However, my newfound appreciation for certain aspects of traditional conservative ideology has opened my eyes to the moral legitimacy of the enterprise as a whole.

As it exists today, I can’t see how any person who is sound in both their reasoning and morals, regardless of ideology, could bring themselves to vote for the Republican party. So I think it’s likely that even if I were born in a household that was the polar opposite of mine politically, I would still find myself supporting the Democratic party today, despite my qualms.

Our country is in bad shape right now. Polarization is tearing at the very fabric of our democracy. Most people today think in terms of their political party or favorite leader, and disregard any opinion that fails to align with their own. If we are to stabilize our great nation and progress as a unified people, we must learn to listen to each other and be willing to have honest conversations, even though it may be difficult. We need a #newcenter.

Opinion: National issues have a presence at home – here’s...