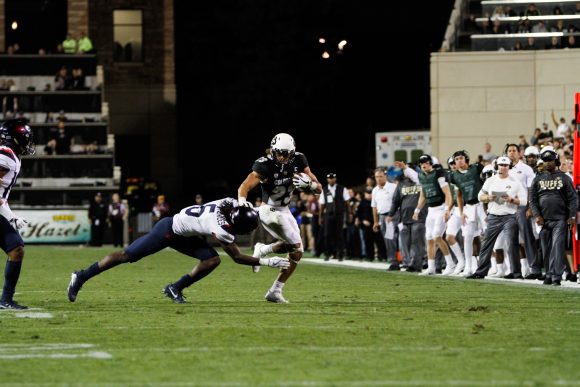 Now that the college football season is two-thirds of the way through, we have an understanding of where each team sits in terms of record and talent level. Here’s how the rest of the season could wind down.

In many ways, this year’s USC Trojans team underperformed. Many people expected them to go undefeated. Talented Quarterback Sam Darnold has had moments where he’s looked like the NFL-caliber player everyone thought he’d be. The signal caller has also looked like an average college quarterback at times. Where Darnold has really struggled is in his reads and decision making — something that’s led to 10 interceptions through nine games. While he has a strong arm and good precision ability, he’ll need to improve in the two other areas going forward.

The Trojans have a talented run game spurred by the tandem of Ronald Jones and freshman Stephen Carr. They also have several dynamic playmakers on defense in cornerback Iman Marshall and linebacker Cameron Smith.  Despite USC’s struggles against No. 9 Notre Dame, their schedule the rest of the way doesn’t pose nearly the same threat, evident in the Trojans’ recent bashing of Arizona State. They’ll play the Buffs in Boulder, with home matchups against Arizona and UCLA. The Trojans should have the firepower to take down all three opponents. Speedy phenom Khalil Tate will pose the greatest threat to USC’s defense with his ability to take off and run. I expect the Trojans to gameplan heavily for him.

Quarterback Khalil Tate has given both the team and hot-seat-ridden head coach Rich Rodriguez a much-needed spark. In his four games as the starter, Tate ran for 926 yards on the ground. Tate already has the fourth most rushing yards in the conference for the season.

The trailblazer instantly gives the Wildcats a chance to win any game with his ability to make plays in space. Tate has opened up more holes for the team’s running backs — something that’s instrumentally important for an offense that runs the ball 80 percent of the time. He’s also opened up more throwing lanes to get the ball to wideouts Shun Brown and Tony Ellison.

The Wildcats’ struggles on defense have been well-documented, as they rank 11th in the Pac-12 in total defense. They should improve behind a talented linebacking core which has Tony Fields and Chris Schooler. This is a team that will lean on their explosive offense to win games. Losing to USC may have been all but expected, but they should have no trouble beating the likes of Oregon and Arizona State if their defense can step up and make a few key plays.

ASU is a team that’s simply gotten hot at the right time. After back-to-back disappointing losses against San Diego State and Texas Tech early in the season, this team has rebounded nicely and played their best football. Two weeks ago their defense came alive, winning a 13-7 low-scoring affair against the then-No. 11 Washington Huskies. The Sun Devils have arguably the best wide receiver in the conference in the big-bodied K’Neal Harry.

I think the Sun Devils will win out their remaining schedule against the likes of Colorado, UCLA, Oregon State and Arizona. Their secondary was hot, ranking fourth in the Pac-12 in pass defense before their matchup against USC. This Arizona State defense had only allowed a mere 467 yards through the air over their last four games before Darnold had 266 yards and three touchdowns. The Sun Devils will win some games and play in several tight contests the rest of the way.

Like their Bay Area counterpart, the USC Trojans, this Bruins team could be doing a lot better right now. Quarterback Josh Rosen ranks sixth in the country in passing yards. Despite the team’s talented passer and smorgasbord of pass catchers lining up beside him, UCLA has been unable to mask their defensive struggles. The team ranks dead last in the conference in total defense and has been downright scorched by opposing offenses at moments this season. Even though they’ve improved recently, this has been something that’s forced the team to play in far too many high-scoring shootouts.

I see the talented signal caller carrying the team the rest of the season and squeezing out two more victories against Utah and Cal. Regardless of the outcomes, UCLA’s extreme ineptitude on defense will disallow them from playing better than a third-tier bowl team.

Just like the rest of the team’s in this division, there’s definitely a feeling that Utah hasn’t played up to their potential. The Utes lost games against ranked opponents USC and Stanford by a combined four points. With quarterback Tyler Huntley suffering an injury, the Utes have faced a positional dilemma with dual-threat signal caller Joe Williams taking over. In limited action, Williams has once again struggled with the turnover bug.

Defensively, Utah has been outstanding, ranking third in the conference in total defense. Cornerbacks Jaylon Johnson and Julian Blackmon have been staples in the secondary. I see Utah’s talented defense allowing them to defeat Colorado, while the game against UCLA is a tossup that could easily go either way. Ultimately, I think the Utes struggles on offense disallow them from defeating juggernauts Washington and Washington State.

The Colorado Buffaloes have followed up last year’s cinderella story with a subpar performance. Colorado has had a wide range of struggles — from lack of execution on offense to inabilities to pressure the quarterback on defense.

The Buffs run defense all season has been “pitiful,” as head coach Mike MacIntyre described it after the team’s loss to Washington. Colorado has been pummeled on the ground. Most notably Washington’s Myles Gaskin had a great performance while Arizona’s Khalil Tate had a historic showing against the Buffs. Even against a Washington State rushing offense that ranks dead last in the conference, they gave up a pedestrian 194 yards on the ground.

In the secondary, Isaiah Oliver has been a major bright spot — leading the conference in pass breakups. Younger cornerbacks Dante Wigley and Trey Udoffia have been picked on frequently with significantly less success.

Running back Phillip Lindsay has kept the team alive. The Tasmanian devil has put the Buffs on his back, accounting for 40 percent of the team’s total yards. Aside from Bryce Bobo, this wide receiving core has been unable to get any type of meaningful production. I don’t see them having an abrupt turnaround, meaning the offense will rely on running the ball to win games.