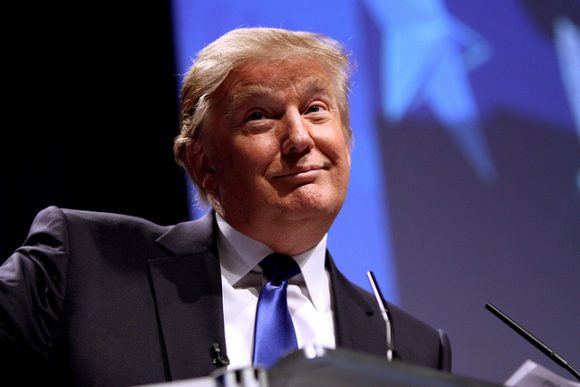 President Trump elongated his ever-expanding list of misogynist policies on Friday by revoking measures that require employers to provide their employees with access to birth control coverage without co-payment.

The Obama Administration passed the Affordable Care Act, requiring in it that insurance companies cover birth control and other contraceptives. President Trump’s new policy has erased this mandate. Religious and moral objections are now valid excuses for employers to stop providing birth control to their female employees.

Beyond the baseless, illogical decision-making that evangelical Christians employ in order to justify denying women of basic health care, though, there is a twinge of comedy.

President Trump has targeted half of his country in a pathetic attempt to reach a group of voters that he has yet to marginalize: evangelical Christians. He has stripped women of freedoms that they had secured in the Obama administration. And he has put forth these policies while our whole nation has the collective memory of his slimy, sexual, juvenile obsession with women.

The Puritanical model of woman that President Trump is creating, with the evangelicals biting at his ankles, is so diametrically opposite of the women that he has worshiped all of his pre-political life. Each one of his wives has been a model or an actress. He’s famously hosted and owned the Miss Universe pageant, during which he allegedly waltzed into rooms packed with half-dressed minors. He clearly isn’t a man operating on modest morals.

If Trump and his followers (and it’s hard to say who is the leader and who is the follower in this situation) get their way, women will have to shrink back into the small spaces of society that they were relegated to a half of a century ago.

The Trump-era woman has limited access to abortion. This could be a small concession if the Trump-era woman had access to reliable birth control. But this isn’t the case. If these policies go undisputed, women will be confronted with the option to succumb to young motherhood or to not have sex. Imagine a young Trump living in a world in which women are terrified to have sex for fear of the consequences.

President Trump’s evangelical base rabidly wants its religious agenda imposed on each citizen of the United States. But such an agenda is not reasonable, legal or logical. Access to birth control has become a standard of Western healthcare, and to revoke employers’ requirement to provide it is to abandon half of the country.

Tangling up the definitions of religion freedom has resounding consequences, though. And, allowing presidents, employers, insurance agencies or representatives to pull the religion card to justify any cruel, baseless human rights violation is absurd. Especially when their decision-making processes are rooted in less-than-spiritual motives, like misogyny and cost-benefit analyses.

The principle of religious freedom protects citizens’ right to practice any religion they wish, as long as it does not prevent other citizens’ access to basic human rights. Employers cannot cite Christianity, or any other religion or ideology, as a justification to deny women access to basic health care.

The Christian majority have been battling since the creation of this country.  Same-sex couples fought for their right to marry for decades, and only just won the battle in 2015. Evangelicals constantly argue that public schools should alter their curriculum to reflect creationism, rather than evolution. Our country, which holds religious freedom as one of its sacred tenets, has seen far too much crossover between church and state.

Evangelicals have positioned Trump in a chokehold. He is imprisoned by his need for their votes and is betraying his one unabashed passion in favor of their archaic agenda.

The trumped-up truth of these restrictive policies is that I doubt our president wants to see a world in which women are incentivized to cover up and stay at home. It’s the world he’s building, though, one buried policy measure at a time.

It’s comedic in the melancholy, nihilist flavor of comedy that abounds today. A man given all of the power in the world, and with it he chooses to betray his own interests and the interests of half of his people. Meanwhile, his subjects are both entertained and terrified. He’s both the jester and the king, and the dances that he’s doing for his subjects are hysterical.

Kim Habicht is a senior at CU studying journalism and psychology. She is currently the head opinion editor at the CU Independent.