Buffaloes take down No. 12 Oregon in four sets 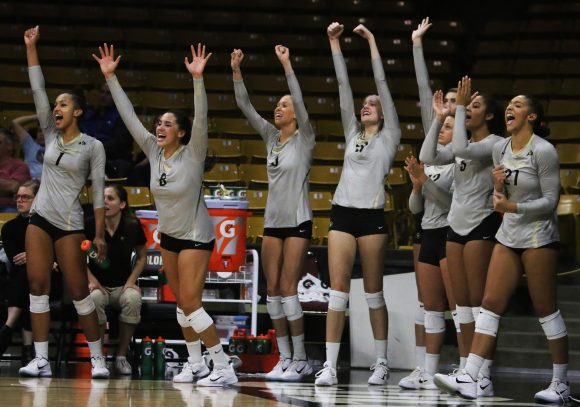 Members of the CU Volleyball team cheer after winning against Oregon on Sept. 30, 2017 (Bri Barnum/CU Independent)

Both teams recently beat their previous opponents in drawn-out, five-set games. But the tough loss to then-No. 4 Stanford didn’t seem to linger for the Buffs, who looked relaxed on the court.

True, as the Buffaloes quickly jumped on the Ducks, building a 3-1 lead thanks to two early attack errors by Oregon and a dramatic kill courtesy of junior outside hitter Alexa Smith on an assist from freshman setter/libero Brynna DeLuzio.

Colorado came out with energy and overpowered the Ducks in the following minutes. This allowed the Buffs to soon establish a 9-2 lead in part due to four-straight attack errors on Oregon.

The Ducks battled back midway through the set. A kill from Oregon’s Vander Weide brought them within three.

Colorado went up 16-9 on yet more service errors committed by the Ducks and two kills by junior outside hitter Frankie Shebby, who led the team in that category with 16 during the game.

From there, the Buffs led by at least five points until senior opposite Joslyn Hayes made the game-winning kill, clinching the first set for Colorado.

The second set was grittier. It began with a teeter tottering of points, until the Buffs managed to slightly break away and take a 12-8 lead. But Oregon launched a counterattack and scored six-straight points, going up 16-13.

It proved to be a near fatal turning point for Colorado, which trailed until two more mishaps in the form of attack errors by the Ducks tied things up at 22.

The Buffs and Ducks battled neck and neck, trading points until finally Oregon, with a 25-24 advantage and in an ironic twist of fate, benefited from an attack error charged to Smith.

Errors continued to plague the Ducks in the third set and contributed to Colorado’s early 7-4 lead.

The Buffaloes were bolstered by junior outside hitters Naghede Abu and Justine Spann. Abu recorded 11 kills and nine blocks in the win while Spann foiled many kill attempts by the Ducks with diving stops. She accumulated seven digs on the night.

With the score tied at 15 and following a Ducks rally, a kill from Spann created some momentum for the Buffs, from which they sailed to victory.

Up 19-17, Colorado got a few points, with four-straight kills, two provided by Smith, separating the team from the Ducks even more.

The Buffs would take the set by six points, with a kill from Shebby closing it out, 25-19.

The final set was similar to the first. Oregon looked disconnected and the Buffaloes went about finalizing their upset.

“We had to force them to plays they didn’t want to make,” Mahoney said.

After a close few opening volleys, a kill from Abu marked the sixth-straight point for Colorado, which saw the Buffs go up 12-6.

The Ducks failed to come closer than within three points of the Buffaloes for the rest of the set and made easy work of the No. 12 team in the nation, winning 25-18.

The Buffs can fly high for the time being, but it will be back to business as the team travels for games at Washington State on Friday, Oct. 6, and Washington on Sunday, Oct. 8. 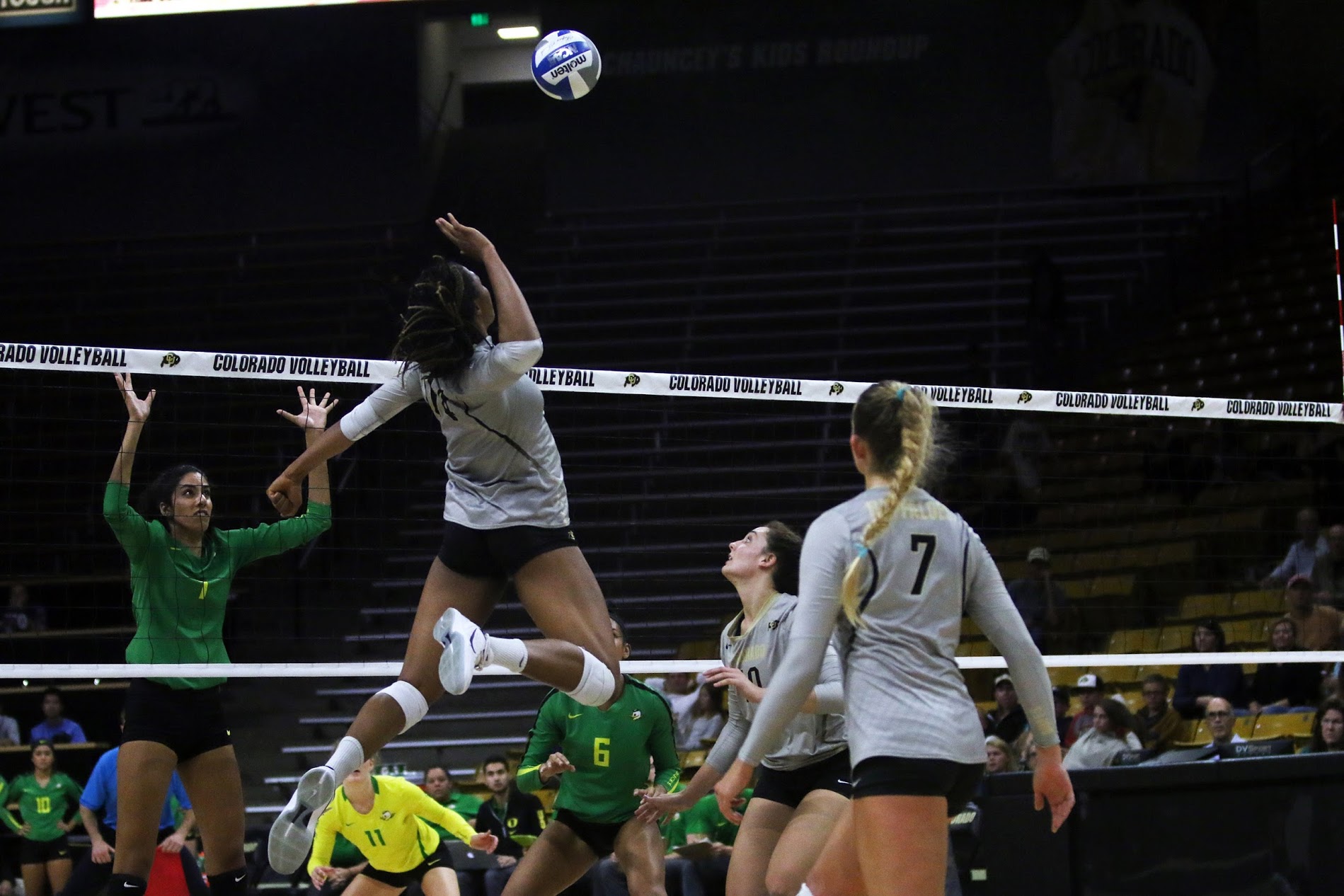 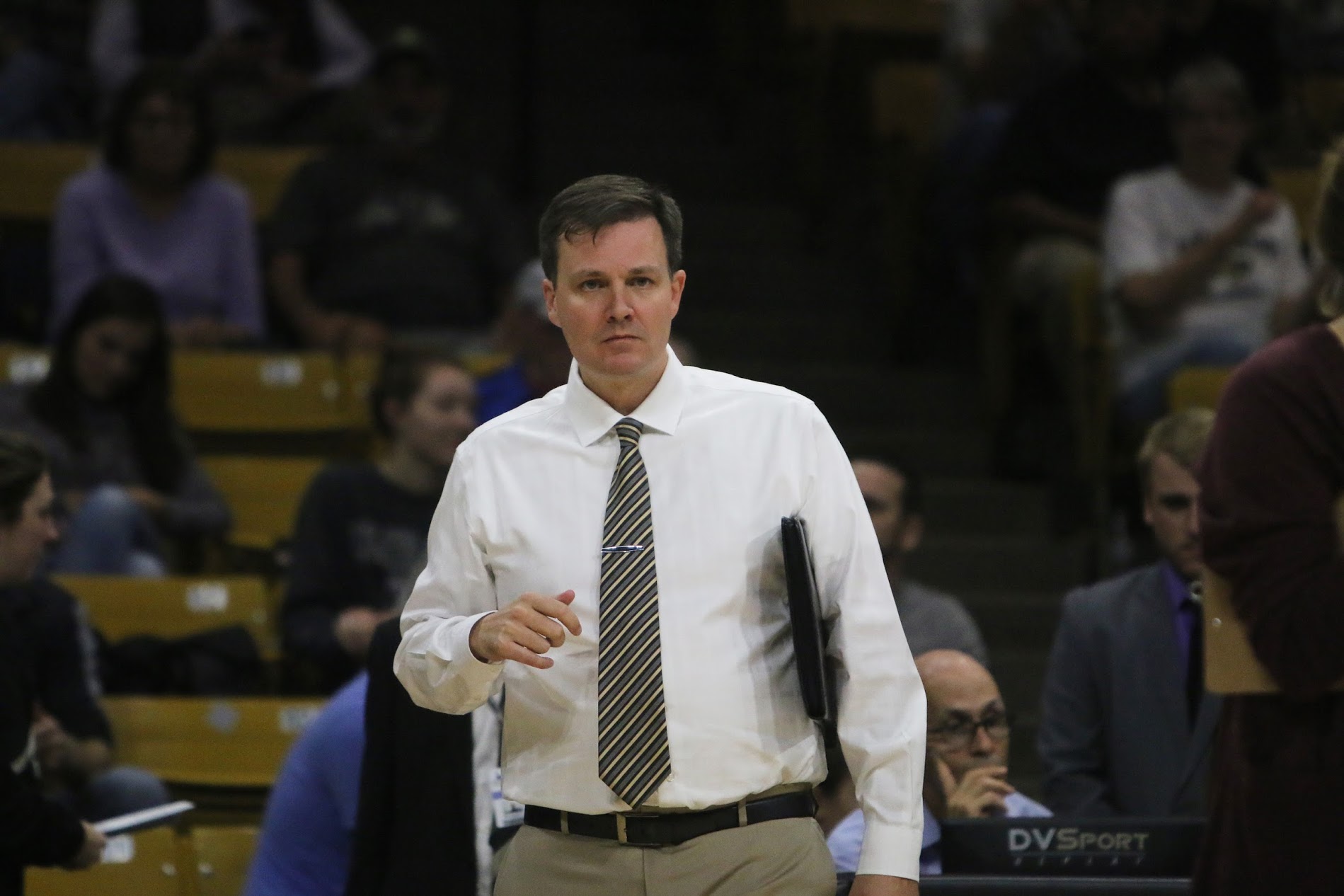 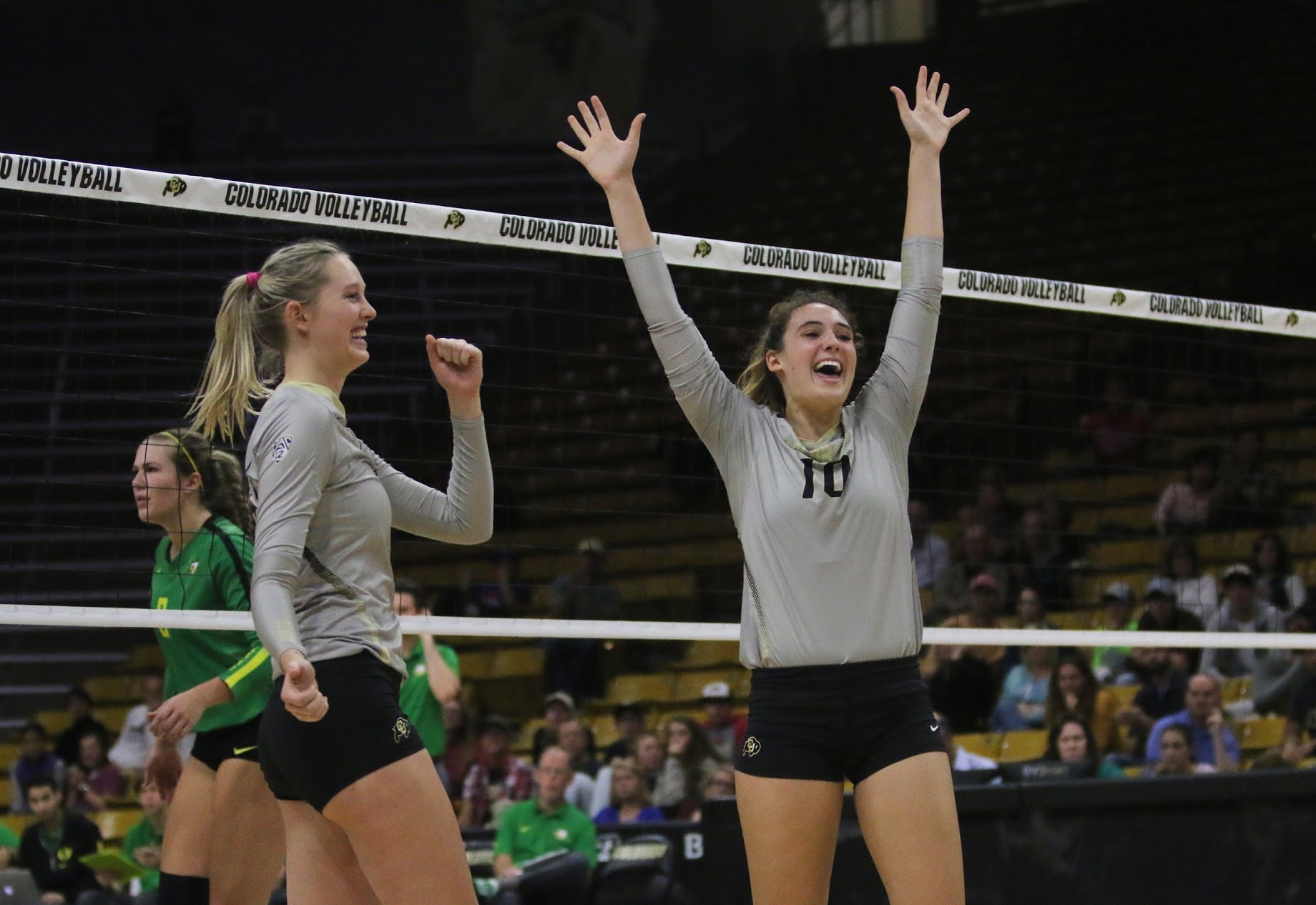 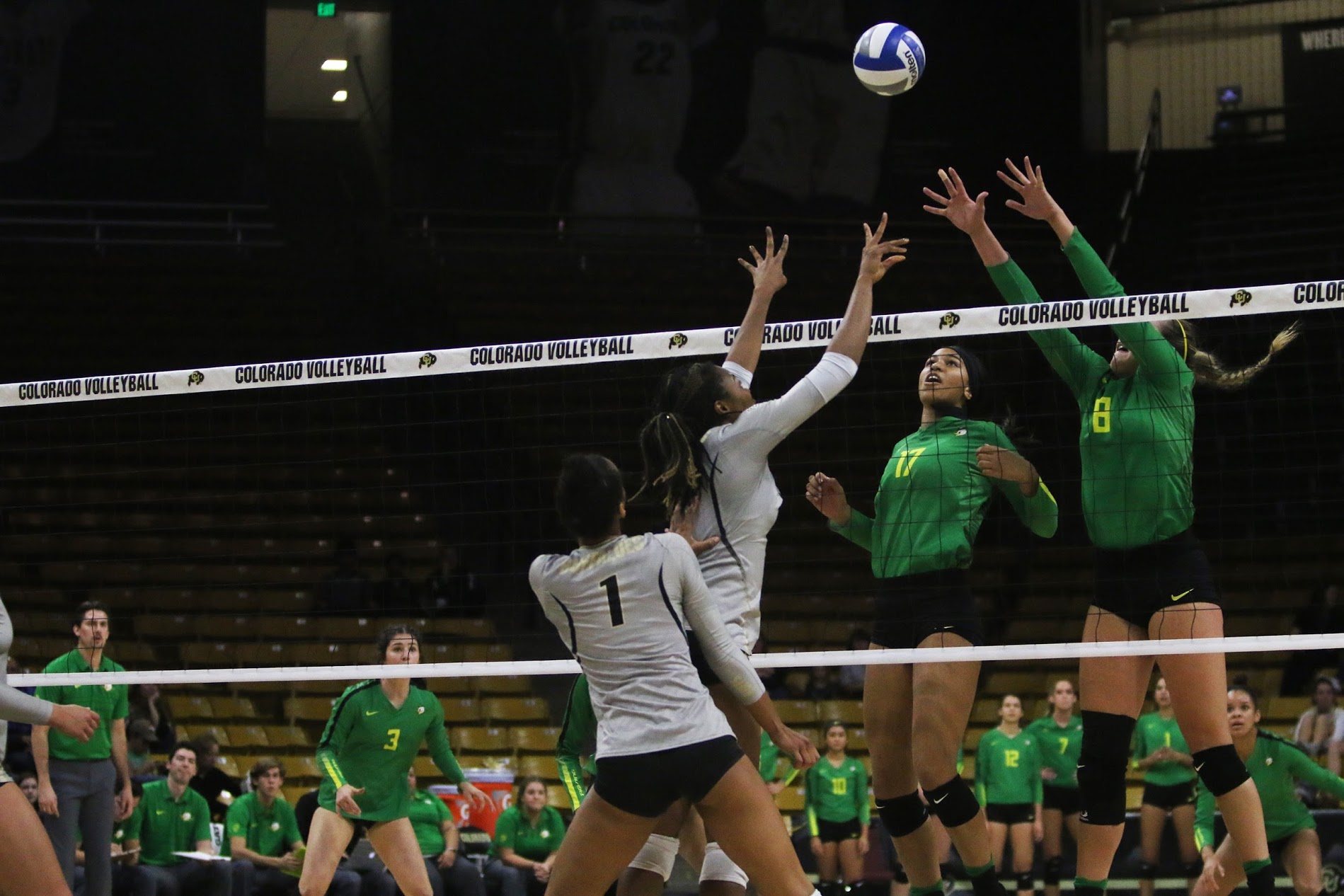 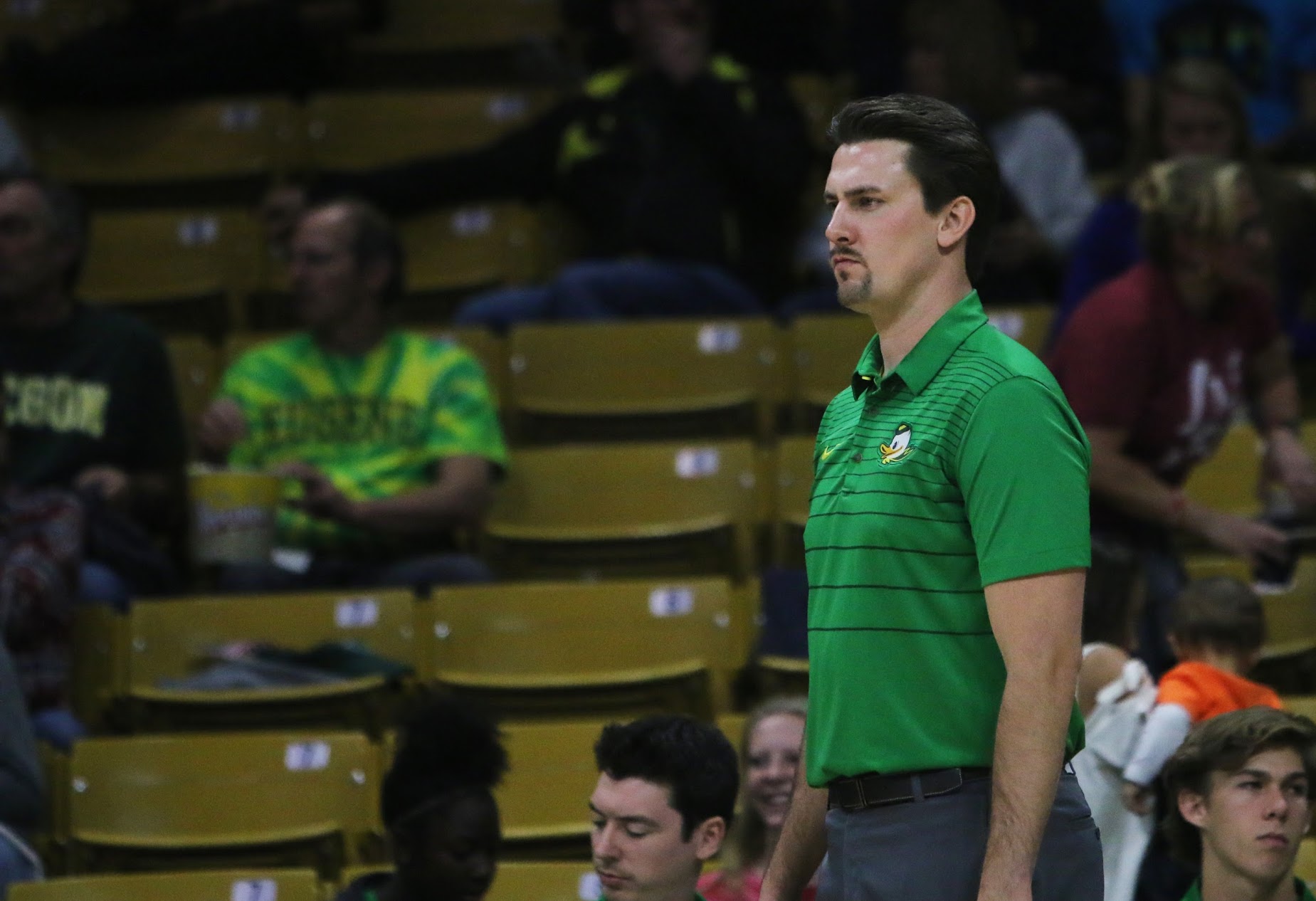 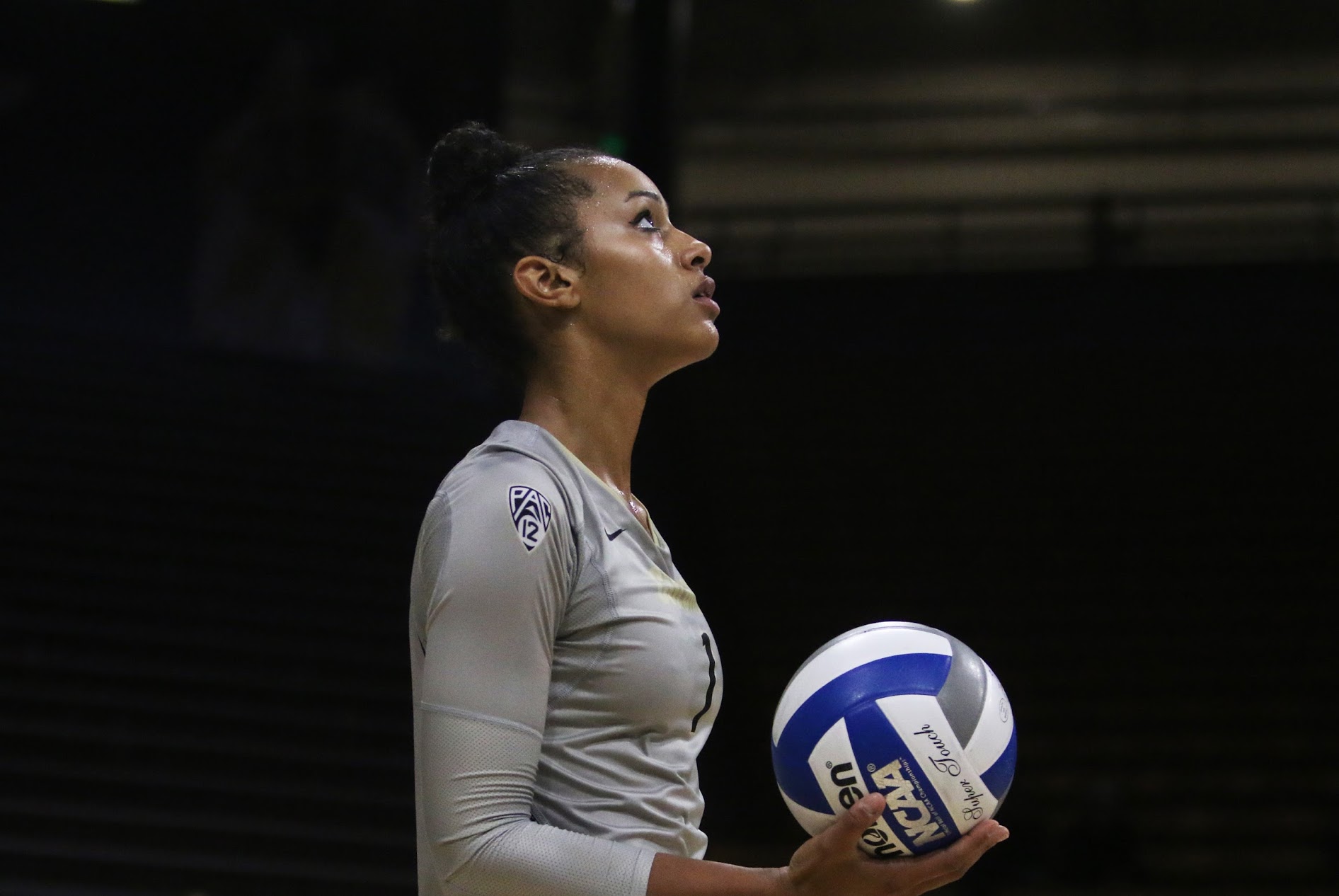