Questionable plays, multiple shots in the foot derail Buffs in 27-23 loss to UCLA 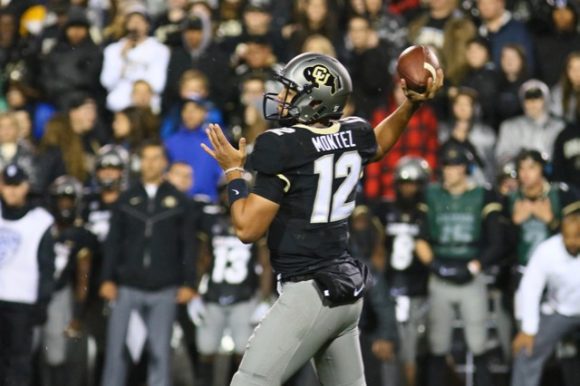 Colorado QB Steven Montez looks to throw the ball during the second quarter of play at Folsom Field in a game on Sept. 23, 2017. (Nigel Amstock/CU Independent)

The Colorado Buffaloes lost a hard-fought, injury filled game to the UCLA Bruins, 27-23.

In a one-score game, every play ends up being crucial. None more so on Saturday than the decision by head coach Mike MacIntyre to go for a fake field goal attempt at the end of the first half.

Colorado was driving and had finally reached the red zone. The offense stalled and was faced with a third down. Sophomore quarterback Steven Montez threw a ball to junior wide receiver Juwann Winfree between multiple UCLA defenders, but Montez found the tight window. The pass fell to the turf: Winfree had dropped it.

Freshman kicker James Stefanou lined up to make the short field goal attempt. However, the holder grabbed the ball and tried to throw it to Stefanou, who had started running in the flat. Stefanou was unable to come up with the catch and the Buffs turned the ball over on downs.

Colorado was set to receive the second-half kickoff, so the decision could be explained in the moment. But hindsight also paints things in a clear light.

It’s unknown what would have happened in the game if the Buffs had just taken the three points. The Bruins’ last drive had the objective of killing the clock with a 24-23 lead. Had they been behind, how different would their drive had been? And how would the Colorado defense respond? These are questions that will likely be left burning in the heads of the Buffs’ coaching staff for a long time.

That wasn’t the only time play calling hurt the visiting team. The offensive game plan was focused on the run. However, Colorado was unwilling to feed senior running back Phillip Lindsay the ball consistently.

Instead, the Buffs relied on sweeps from the wide receivers and a lot of designed runs for Montez. This decision almost proved costly, as Montez was slow to get up at multiple times in the game.

It got to the point where backup freshman quarterback Sam Noyer could be seen warming up on the sidelines at one point.

WInfree wasn’t the only Buff to bobble a touchdown pass. Senior wide receiver Bryce Bobo also dropped a pass in the endzone late in the game after another tough throw by Montez.

The team seemed to be OK at holding off the UCLA living legend. But there’s a reason Rosen is expected to go high in next year’s NFL Draft. Even on a night where Rosen didn’t look like his usual self, he still finished with 372 yards and a touchdown.

The injury bug bit a lot of other players too. Most were not serious, but players on both teams had to be helped off the field.

Senior safety Afolabi Laguda got hit on a late block by UCLA wide receiver Jordan Lasley. Laguda was down on the field for a noticeable amount of time and was helped up by training staff and senior tight end George Frazier.

The safety was then carted to the team’s locker room. Laguda ended up seeing some time on the field later in the game.

UCLA’s defense turned on their engines, something they hadn’t done this year. A team that ranked near the bottom of all 129 schools was able to do enough to stifle the Buffs.

Colorado still had 191 total yards on the ground, but that’s well below the Bruins’ 307.5 yards allowed average going into the matchup.

Lindsay came looking to feed on UCLA’s front seven. The running back even took a hard hit on the Buffs’ first drive. Upon review, it was deemed that cornerback Darnay Holmes had led with his helmet and was ejected for targeting.

Lindsay bounced right up after the play. He followed it by catching a 21-yard touchdown pass and the first points of the night, putting the Buffs up by a score. He finished the night with 83 yards on 19 carries and four catches for 47 yards.

Some playcalling worked in the Buffs’ favor. The team opted to go on multiple fourth-and-short situations. On one, Colorado lined up looking like they would run it up the gut. With some impressive showmanship, Montez kept the ball and went to the outside for a big gain, helping set up Lindsay for a short touchdown run.

Montez finished 17-of-36 for 243 yards and a lone touchdown in the loss. He also contributed 108 yards on the ground.

This would end up being the last touchdown of the game. Colorado was behind 21-17 and were able to close the gap with a field goal late in the third quarter. The teams ended up being unable to generate much offense in the last quarter and had to settle for trading kicks.

Colorado (3-2, 2-0 Pac-12) will look to bounce back next Saturday. The team will host the University of Arizona Wildcats with kickoff scheduled at 6 p.m. MST.