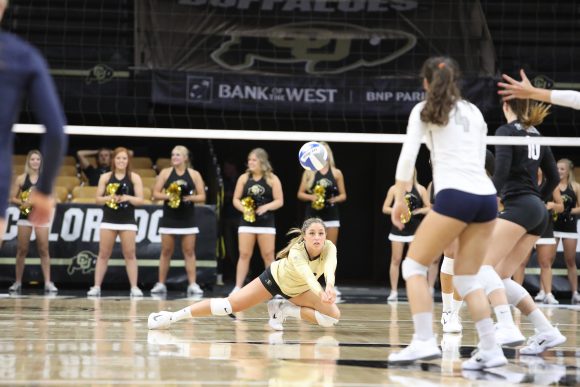 Gabby Samuels stretches for the ball in a game on Sept. 15, 2017. (Spencer Pierson/CU Independent)

The Colorado Buffaloes women’s volleyball team endured their second straight five-set game and this time came out victorious. The Buffs earned their first Pac-12 victory at home against the Oregon State Beavers, 3-2 win. It was a long, hard-fought game, but the Buffs managed to hold on and come away with the W.

The Buffs looked somewhat shaky coming out of the gate, giving up some early points on unforced mistakes. Most notably, two CU players ran into each other trying to defend the right side of the net, letting the ball fall to the court untouched. Oregon State took advantage, holding on to a multi-point lead well into the set.

Colorado shook off the rust and found success scoring with attacks from junior outside hitter Alexa Smith and blocks from junior middle blocker Naghede Abu. After trailing for most of the set, the Buffs finally took the lead at 20-19. Some attack errors from Oregon State and a monster spike by Abu would allow the Buffs to set up the game point, which they won off an excellent kill from senior opposite Joslyn Hayes.

The Beavers came into the second set attacking the net hard, slapping any low-arcing shots straight into the court. But Smith refused to let the Beavers pull away, scoring three long-range kills in a row to keep the game tied as both teams passed the 10-point mark.

Smith led the team on offense, racking up 21 kills in yet another impressive performance for the Colorado Springs native. Despite Smith’s great play, the Buffs defense would struggle to contain the Beavers’ star Mary-Kate Marshall. She helped the Beavers hold the lead well into the set and led the Beavers with 22 kills.

The two teams were neck and neck going into the set point, but two straight out-of -bounds attacks from the Buffs would hand the Beavers the set, 27-25. This tied the game at 1.

Oregon State carried that momentum into the third set, building their largest lead at that point in the game at 11-6 despite some impressive digs from Buffs junior defensive specialist Gabby Carta-Samuels. Down 17-11, the Buffs would have to claw their way back, surviving some long volleys to eventually tie it up at 22. From there, it was another tight race to 25. This time the Buffs stood tall, winning 25-23 on another set-sealing kill from Hayes.

In set four, Oregon State would put up yet another early lead, going up 9-3 off several attack errors from Colorado. The errors would keep piling up. Oregon State kept their foot on the gas peddle, scoring 11 unanswered points to go up 21-6. Nothing could slow the Beavers as they easily took the set 25-7.

Colorado shook off the lopsided loss and came out firing in the last set, finally getting their own early lead.

“Going into the fifth set, we needed to remind ourselves that it was a fresh start, we needed to let that set go and put it behind us,” Smith said after the game. “We played a lot of up and down volleyball and that’s something we need to work on, being more consistent.”

The Beavers fought back with excellent defense, but the Buffs held on, winning the set, 15-12, and the game on an ace that barely fell over the net.

Head coach Jesse Mahoney was pleased with the win, but made sure to note how uncomfortably close the game was.

“A lot of times it’s a coin flip — that last serve is an ace or an error and tonight it went our way,” Mahoney said.

After the tough win, Colorado will return to Coors Saturday night to take on the No. 12 Oregon Ducks. That game will tip off at 7 p.m.