Opinion: How to help the Rohingya 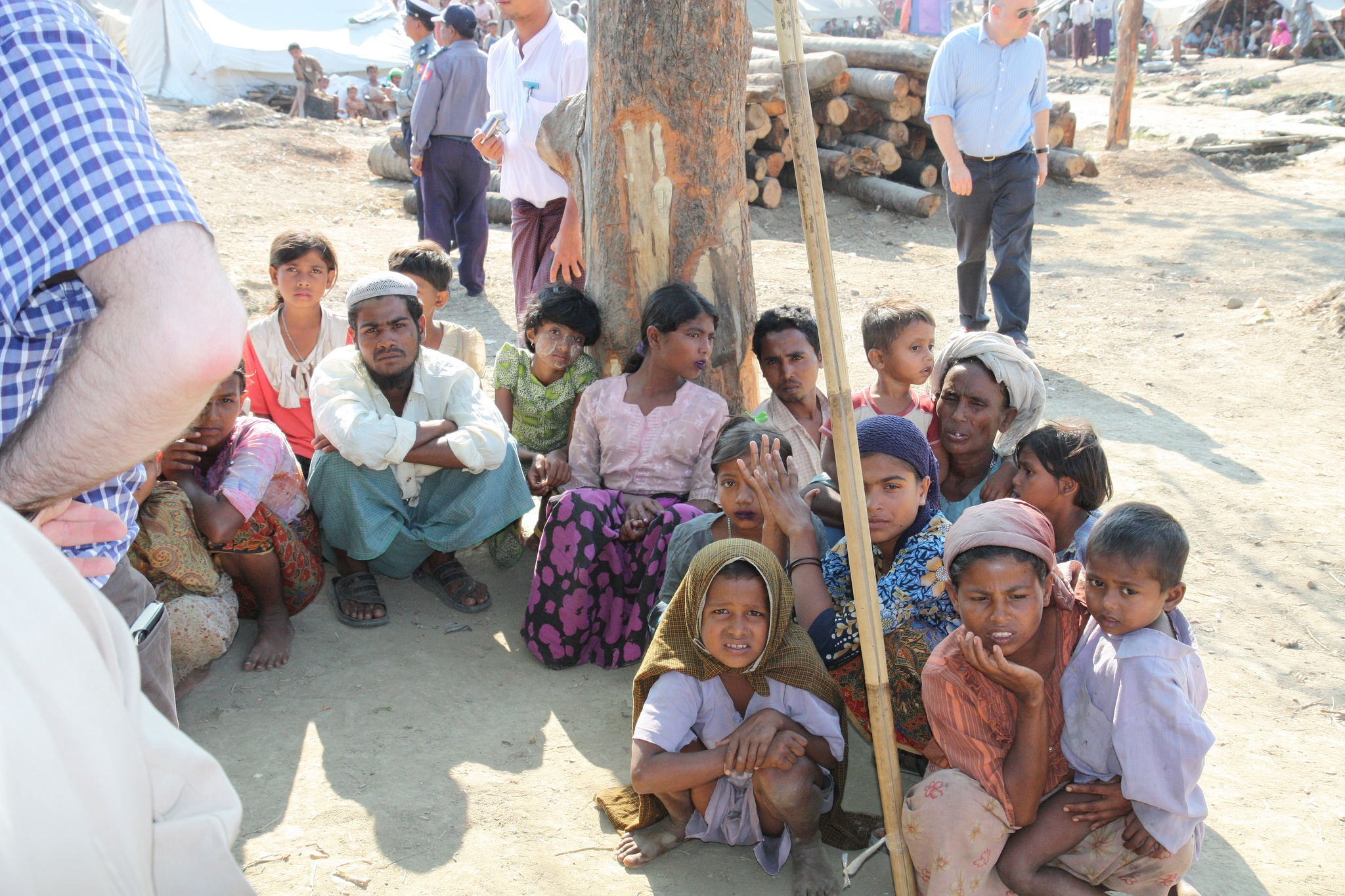 In the Donald Trump era, staying up-to-date on current events is nearly impossible. Every day a new bombshell or breaking news story emerges, and our president is often the subject.

However, as crucial as it is to stay informed on the latest ways President Trump is eroding civil society globally, there are other, equally important things going on in the world that deserve attention.

Arguably one of the most pressing things is the collection of horrors taking place in Myanmar, which only recently garnered American media attention.

Previously known as Burma, the Southeast Asian country has wrestled to end sectarian and religious hostilities for decades. The Rohingya Muslims, who have never been granted citizenship, have strained relations with the Buddhist majority.

Since regaining independence in 1948, Myanmar experienced a tumultuous history, shifting constantly between civil war and military dictatorship. Using the Rohingya as a scapegoat for the country’s many issues seems to be a common theme throughout these conflicts.

Until recently, the threat of violence as a byproduct of the tensions has been compartmentalized, largely due to the lack of freedoms granted to the public under the military rule.

In 2010, Myanmar held its first democratic election. Nobel Peace Prize recipient Aung San Suu Kyi won and is currently serving as state counselor. She received the recognition for the role she played in opposing the brutal military government. With her election, the free world rejoiced at the sight of another democracy taking the place of dictatorship.

Of course, Myanmar’s shift from military rule to representative democracy was overall a positive change. But the new freedoms given to the country’s citizens had some unintended, and bloody, consequences.

The current situation began with a steady, years-long increase in attacks carried out by militant Rohingya separatists. They felt empowered by the change in government and targeted the local Buddhist population. Tensions continued to rise and culminated in an attack on a police station on Aug. 25, 2017. The response from Myanmar’s military was swift and brutal.

The head of the military, Min Aung Hlaing, ordered local security forces to go on “clearance operations” in Rohingya villages. Since then, more than 400,000 Rohingya have fled their homes toward the Bangladeshi border, dodging the landmines placed in their path by the Myanmar military.

Those who failed to make it out in time have told stories of extrajudicial killings, rape and even infanticide committed by soldiers. They also recounted the burning of their villages, which has been confirmed by satellite images.

According to top U.N. human rights official, this is a “textbook example” of ethnic cleansing.

To make matters worse, neighboring India has refused to accept any refugees. Thailand and Malaysia have hesitated to take in many.

Unfortunately, Suu Kyi has spoken very little on the subject, and what she has said publicly is far from reassuring.

Although Suu Kyi’s silence on the subject should be considered reprehensible, it must be noted that she faces an unfortunate truth: Myanmar’s constitution gives full autonomy to the military. So even if she were to condemn these atrocities outright, which she should, she is legally powerless against them.

Given that Myanmar’s Parliament and state counselor have their hands tied and its neighboring countries have done so little to help, this begs the most relevant question: What can the United States do about it?

Several options exist. One could condemn the attacks more emphatically while also pressuring neighboring countries to provide further support. We could also enforce economic sanctions on Myanmar to produce a stronger public response in opposition to the brutal military campaign.

These strategies appear to be appealing, but they ignore some consequential factors.

For one, few would dispute that the U.S. enjoyed a much greater bargaining power nine months ago compared to today. This is not only due to President Trump’s lack of international popularity and respect, but also because of the strength of our foreign relations under President Obama.

Considering Trump’s tenure thus far, it’s difficult to envision “Mr. Art of the Deal” actually making a beneficial deal with a foreign leader, especially when the goal is humanitarian and lacking an “America First” angle. It should now be abundantly clear that relying on Trump’s power to persuade educated and level-headed people is never a winning strategy.

Imposing sanctions on the country would be even more foolish. Myanmar’s military is, for all intents and purposes, unconnected to the government. The innocent citizens, not the actual perpetrators, would suffer from it.

The ideal course of action for the U.S. is getting the U.N. to approve action. Nikki Haley, the U.S. ambassador to the U.N., should propose sending peacekeepers to the conflict region in order to ensure stability. Unfortunately, representatives from Suu Kyi’s administration have previously stated they would not permit U.N. officials to enter the country. Therefore, even if the predictably impotent U.N. Security Council votes in favor of sending peacekeepers, it is likely Myanmar will continue to block their entry.

The more plausible action is outwardly less appealing, even though it may be the best way to achieve peace. The U.S. should deploy its own troops to the affected region in Myanmar.

In light of recent U.S. military history, any plan involving American troops in a foreign country would garner little public support, especially from those critical of past interventions. But, the circumstances in Myanmar are different from recent failed campaigns.

Unlike the invasion of Iraq, the goals would not be deposing a tyrannical dictator and nation building. Although Suu Kyi’s government has failed by international standards to address the issue at hand, her administration is not directly responsible. It isn’t necessary to depose her, like we did Saddam Hussein.

The plan would be to invade, protect the remaining Rohingya in the region and dismember the military leadership responsible for committing these crimes. After these goals were achieved, a constitutional convention would be called. The Myanmar constitution could be amended to give Suu Kyi and parliament control over the new military, consistent with a true democracy.

U.S. troops would then come home, leaving Myanmar a stronger democracy than it was before.

One of the most overlooked variables in the invasions of Iraq and Afghanistan was that, to many Muslims, it was interpreted as a holy war waged by white, western Christians against the Arab Muslim world. Although true as a strictly demographic matter, this assertion is profoundly inaccurate regarding intent. Nevertheless, the prominent Muslim perception of its validity proved consequential.

There is, of course, substantial disagreement as to our government’s true intentions in invading Iraq in 2003, and a purely humanitarian basis for it is quite unlikely. But no matter the motivation, and disregarding the many mistakes America made, just the sheer presence of Western armies on Muslim soil was enough to enrage a significant amount of the population. This led to more instability in an already war-torn country plagued by religious sectarian animosity.

In contrast, intervening in Myanmar wouldn’t appear to be Crusade-like since Myanmar is not considered by Muslims to be holy land. In fact, it is the opposite. We would be invading a predominantly non-Muslim country to protect the Muslim population within it.

Furthermore, if the U.S. succeeds in halting the genocide and leaves the country more stable, the international community will remember it. It may not suffice as an apology for the divisive actions and statements of our current president, or even as a counterexample to the poorly conceived interventions of the recent past. But it would act as a reminder that the U.S. can still be a reliable ally, willing to defend freedom abroad.

As a member of the international community, and as an assignee of the Geneva Accords, the U.S. has a responsibility to prevent genocide whenever possible. The situation in Myanmar clearly fits the criteria.

Given the strength of American military force, our inaction would not only be unfavorable, it would be inexcusable.