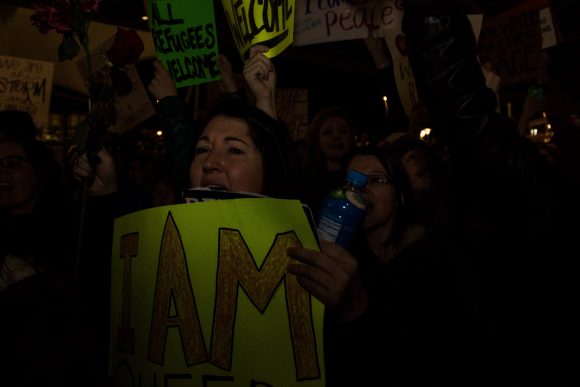 One month after a federal court blocked President Donald Trump’s executive order that banned entry to the United States for citizens of seven Muslim-majority nations and refugees worldwide, Trump has signed a revised order tightening restrictions on who can enter the country, the New York Times reported Monday morning.

The revised order blocks entry for citizens from Libya, Somalia, Iran, Sudan, Syria and Yemen for 90 days, with Iraqi citizens removed from the previous list, and carves out exemptions for current visa and other green card holders from the six Muslim-majority countries.

The new order also drops a provision many saw as a version of the ban on Muslim entry to the U.S. Trump called for during his campaign, which allowed for “religious minorities” — Trump referenced Christians specifically — from the original seven Muslim-majority countries to attempt entry through the refugee program.

The new order still bars refugee entry worldwide for 120 days, but in contrast with the first order, Syrian refugees will not be barred indefinitely.

When the first order was signed on Jan. 27, chaos erupted at Denver International Airport and airports across the country as unwitting travelers arrived in the U.S. to find their once-valid visas cancelled mid-flight. Outside the terminals, protesters, lawyers and activists offered assistance for those caught in the legal limbo both in Denver and across the country.

“This ban is unconstitutional — it is un-American,” said Nathan Woodliff-Stanley, the executive director of Colorado’s American Civil Liberties Union branch, during the first DIA protest on Jan. 28.

The 9th U.S. Circuit Court of Appeals sided with Woodliff-Stanley’s sentiments seven days later when it voted 3-0 to block the original order.

After the original order’s blockage, students at CU Boulder from the seven banned countries still felt uncertain over their place in the U.S. The new executive order has rekindled those fears.

“It is kind of devastating … I am not going to see my family for three years,” said Ali Sepahvand, an Iranian doctoral candidate in electrical engineering at CU.

His hopes that his family would travel to Boulder from Iran to see him receive his diploma have been dashed by the 90-day blockade on people from Iran, where his family lives.

The order comes after a troubled weekend for the White House. As reported by the New York Times, the ban was originally slated for last Wednesday but was pushed back to improve the public relations impact from Trump’s speech to Congress on Tuesday.

In hopes for a smoother transition than the tumultuous roll-out of the first order, the revised version will take effect on March 16, giving agencies in charge of monitoring ports of entry 10 days to prepare its implementation.

Board of Regents to vote on finalists for CU...