The University of Colorado men’s basketball team currently has a 6-9 record in the Pac-12 after a humiliating loss to the No. 6 Oregon Ducks Saturday. Colorado’s hopes of a berth in the NCAA Tournament are virtually dashed with this defeat in Eugene. The Buffs do, however, still have at least one thing to fight for — a Pac-12 title.

The Buffs are currently tied for seventh in the conference with the Arizona State Sun Devils. However, since Arizona State defeated Colorado in January, 78-77, the Sun Devils hold the tiebreaker for that spot.

That means if the tournament started today, Colorado would be seeded eighth and would play the ninth seed, the Stanford Cardinal.

Here’s the outlook for the Pac-12 tournament if the season ended right now:

Presuming the Buffaloes beat Stanford, they would then face one of the hottest teams in the nation, the No. 4 Arizona Wildcats.

The truth, however, is that Colorado has three more games to play in their turbulent Pac-12 season. The remaining games against Utah, Stanford and California will be played at the Coors Events Center, a bonus for the Buffs.

Two of the next three opponents for CU, Utah and California, gave the Buffaloes tough loses earlier this season.

I project that the Buffaloes will be victorious against Utah and Stanford, but lose to California in a close game on Senior Day.

From this prediction, Colorado would end with a conference record of 8-10.

Currently, the Buffaloes are two games behind the USC Trojans for the fifth seed and 1.5 games behind Utah for the sixth seed.

The Trojans play Arizona this Thursday, and I don’t expect much from USC in that game. But the Trpjans’ next three opponents after Arizona are Arizona State, Washington State and Washington. Expect USC to finish with an impressive 11-7 conference record, giving them the fifth seed.

The Utes travel to Boulder to face the Buffs Thursday, and then host California and Stanford. I predict that Utah will defeat Stanford, but not Colorado or California, resulting in conference record of 9-9 and the sixth seed in the tournament.

Arizona State, which owns the tiebreaker with the Buffs, has an incredibly tough task ahead. They must keep up with the other three teams fighting for a high seed in the Pac-12 tournament. Their next three games are at home against UCLA, USC and Arizona — games that I project them to lose, despite being at home. The Sun Devils will finish 6-12 in the conference with the eighth seed.

Here’s what the Pac-12 tournament would look like with my projections:

As you may notice, I have Oregon taking the regular season crown due to the fact that Arizona will play No. 5 UCLA this Saturday. In the projected event that the Wildcats lose to the Bruins, both Arizona and Oregon will have the same conference record to end the season, but Oregon owns the head-to-head tiebreaker.

In this scenario, the Buffaloes would attain the seventh seed and take on the Washington State Cougars, an opponent that they recently had no trouble dealing with.

If the all the stars aligned for Colorado, meaning that the Buffs would win-out and both USC and Utah lose-out, the bracket would look like this: 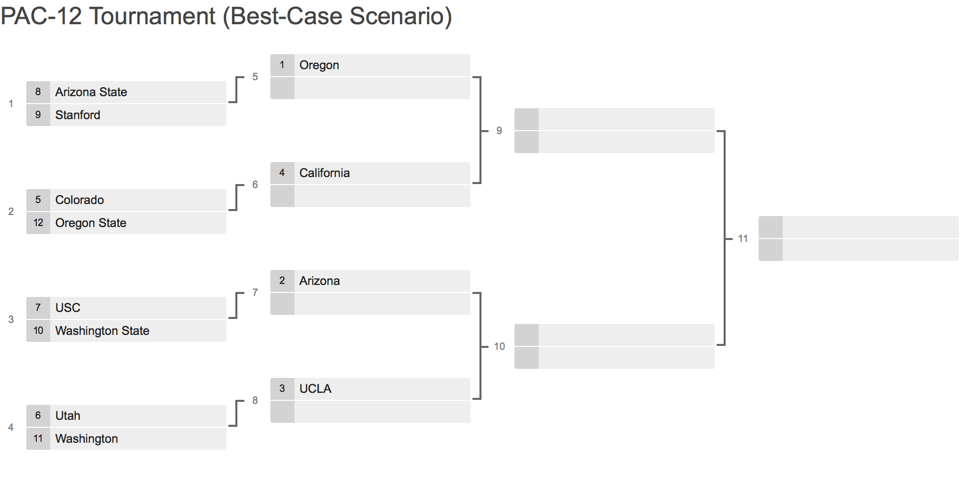 In addition to claiming the fifth seed, they would then face the inferior Oregon State Beavers. Assuming they win this game, they would go on to play the worst of the four teams with a bye, Cal.

This is the dream scenario for Colorado, as it would give them the best chance for a deep tournament run.

The truth about the Pac-12 conference, however, is that it’s a very deep conference. Any of the top seven teams can make an impact on the tournament, including Colorado.