The Colorado Buffaloes women’s basketball team was on the verge of a massive upset at the Coors Events Center, only to be ousted by the No.11 Oregon State Beavers by 54-49 on Friday night.

The Buffs, fresh off a 64-59 victory in Berkeley against the California Golden Bears Sunday, looked to surprise more critics going up against No.11 Oregon State. Their California victory broke a 16-game road losing streak in the Pac-12,.

Critics were surprised in the first four minutes of the game, as Colorado went on a 7-0 run to kick things off. The Beavers then quickly responded with a 16-2 run, leading to a 17-11 advantage after the 1st quarter.

The 11th-ranked team in the country would then build on that momentum in the second quarter as senior Oregon guard Sydney Wiese would go 4-of-5 beyond the arc, snatching herself 12 points at the end of the first half. Colorado would go into the intermission down 33-25.

In the third quarter, momentum did not swing back to the Buffs. Oregon State was up by nine going into the fourth quarter, where the drama started to kick in.

The Buffs were only down by three with roughly four minutes left to play. Sophomore guard Ariana Freeman put in a layup to cut the score to 48-47 with two minutes to go.

Colorado couldn’t convert a basket in the last two minutes of the game as the Beavers would go on to survive in Boulder.

Keeping the Buff’s chances alive through out the game was the Beavers 18 turnovers. Colorado went into Friday night leading the Pac-12 in both turnover margin and steals.

Senior guard/forward Haley Smith claimed five steals, a career-high for the Sammamish, Wash. native who praised her team’s effort on the defensive side of the ball.

“We were just being aggressive, Smith said. “Forcing people to do what we want them to do. They have a lot of talented players, but if we can make them do the things they’re uncomfortable with, in this case pressure, we can control the game and that was really helpful tonight.”

The major downfall for the Buffaloes however was three-point shooting and being outclassed on the boards by the Beavers.

Their performance from beyond the arc wasn’t just bad, but dreadful, as Colorado went on to go 0-for-13 from downtown.

The last time the Lady Buffaloes didn’t convert a three-point shot was back on March 2, 2014 against the USC Trojans.

But head coach JR Payne wasn’t too concerned with Colorado’s inabilities from deep.

“I wish we had made some, but I don’t really worry about that.” Payne said. “We shoot the ball well and our shooters are confident. They know that we’re confident in them so I don’t expect the poor shooting performance to happen again.”

What coach Payne wasn’t too satisfied with was their production on the glass, as Oregon State would go on to out-rebound the Buffs, 51-30.

“I’m disappointed in our rebounding numbers,” said Payne. “I know [Oregon State is] the best rebounding team in the Pac-12 and one of the better rebounding teams in the country. But I still think we’re better than being beat by 20 on the boards and that’s an area as a group we have to do better from top to bottom.”

In spite of coach Payne’s criticism for her team’s ineffectiveness on the boards, the Beavers are one of the best teams in the nation, both in rebounding and in general for a reason. They lead the Pac-12 in both rebounding margin and rebounding defense.

Their exceptional play is also thanks to Wiese who bagged herself 14 points on five assists alongside senior forward Kolbie Orum, who claimed 10 points and seven rebounds.

Meanwhile for the Buffaloes, sophomore guard Kennedy Leonard was the game’s highest scorer with 18 points on 8-of-19 shooting, dropping five assists to her name as well.

The Lady Buffaloes will play their final home game of the season against the Oregon Ducks on Sunday. Tipoff is scheduled at 12 p.m. MST. 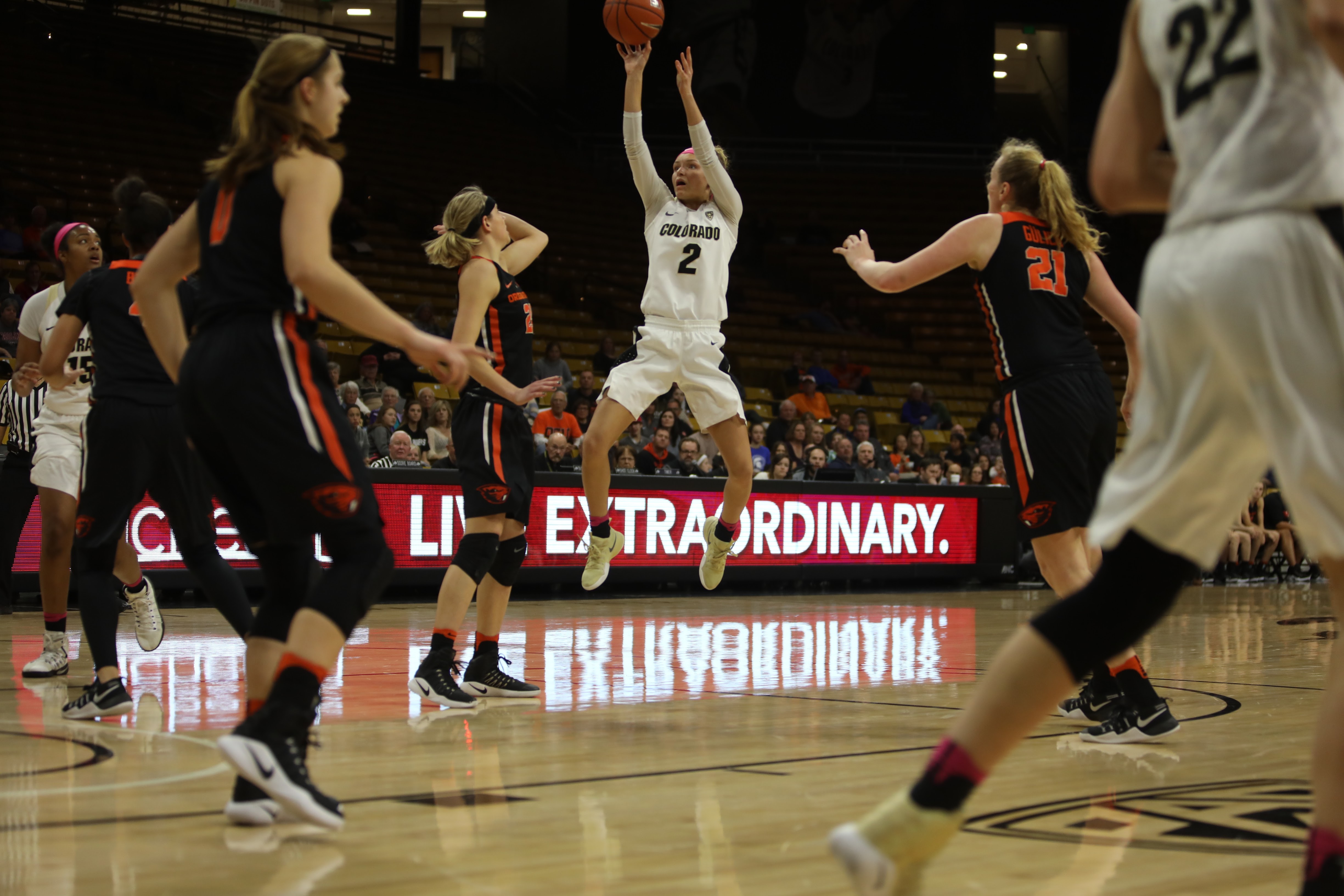 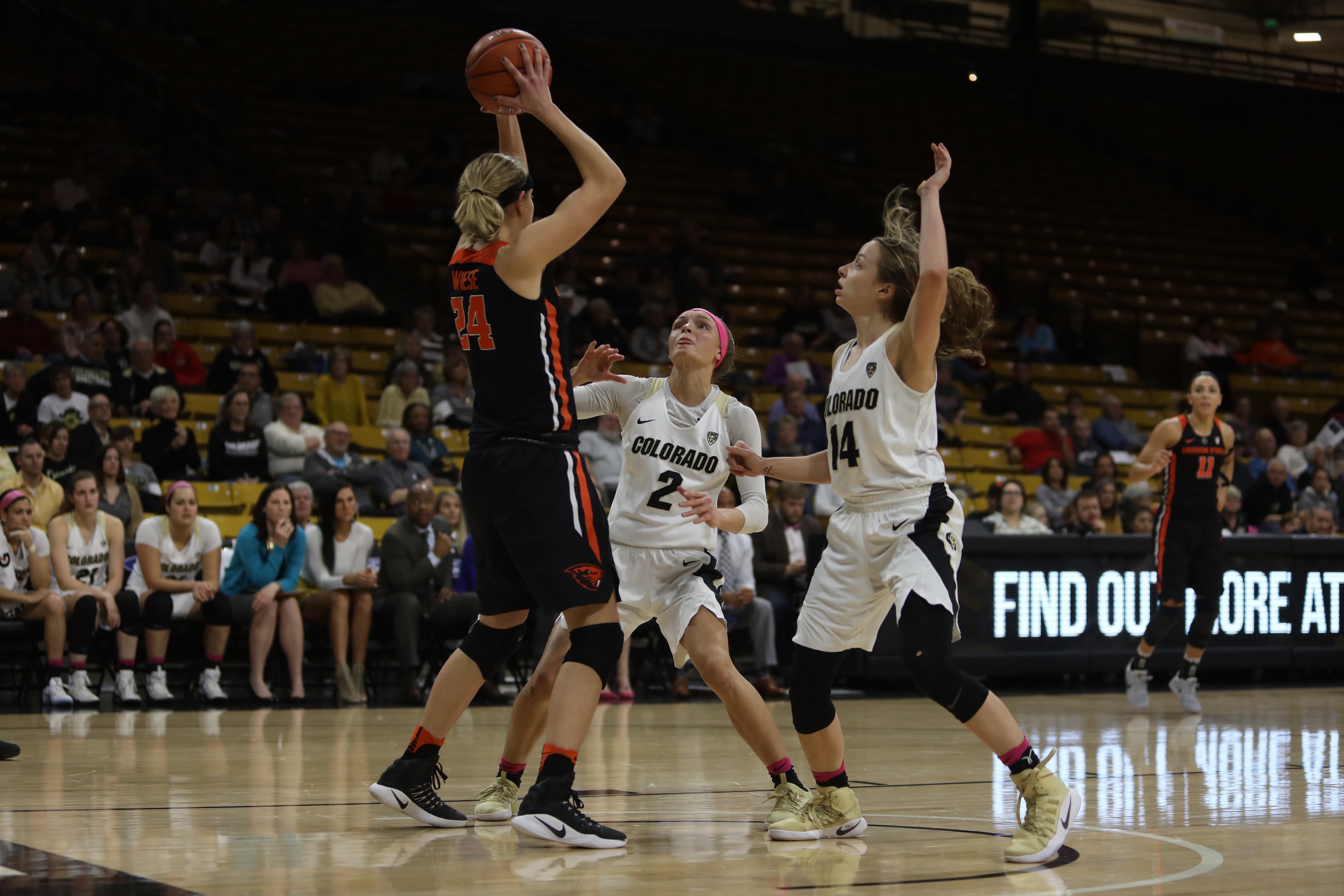 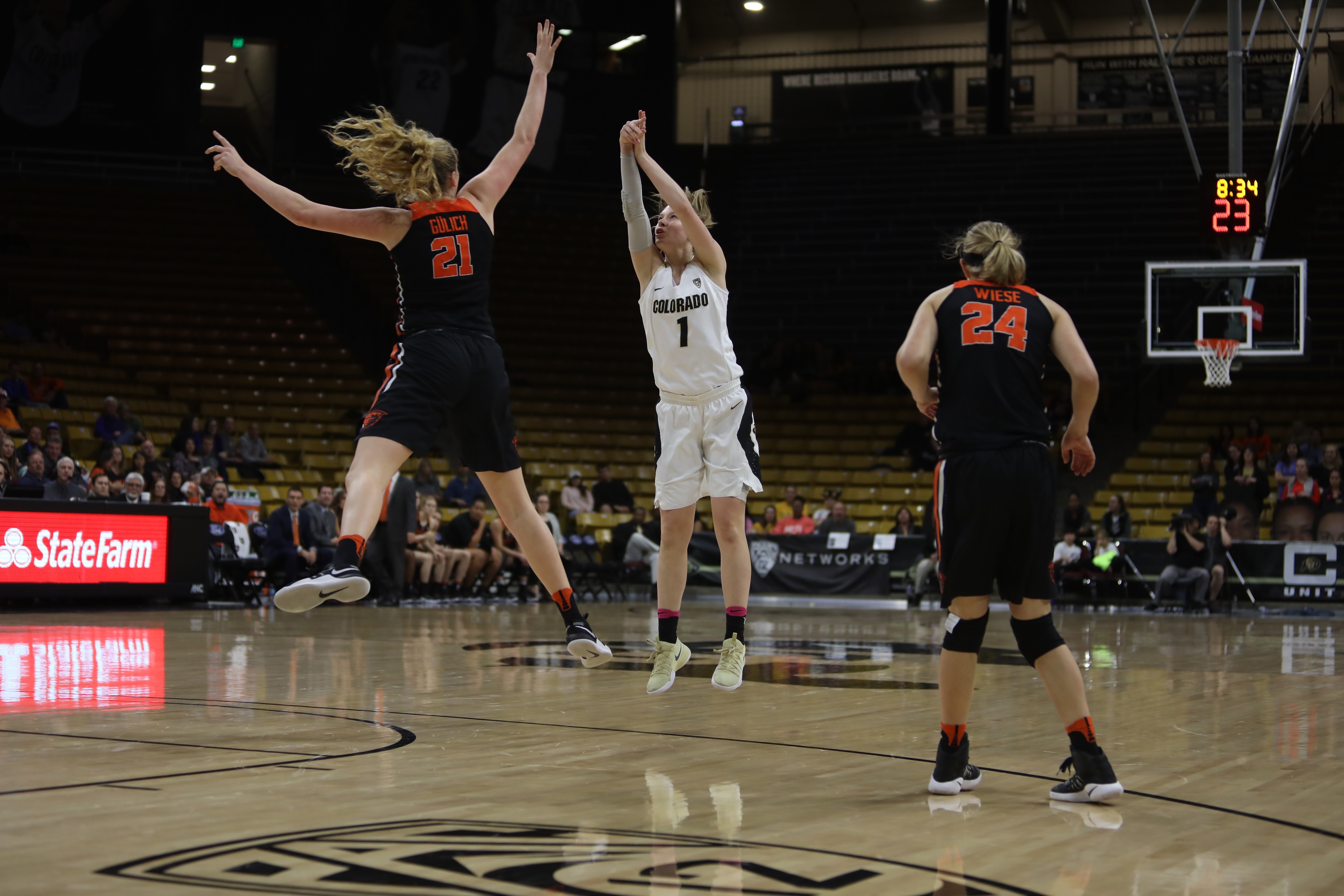 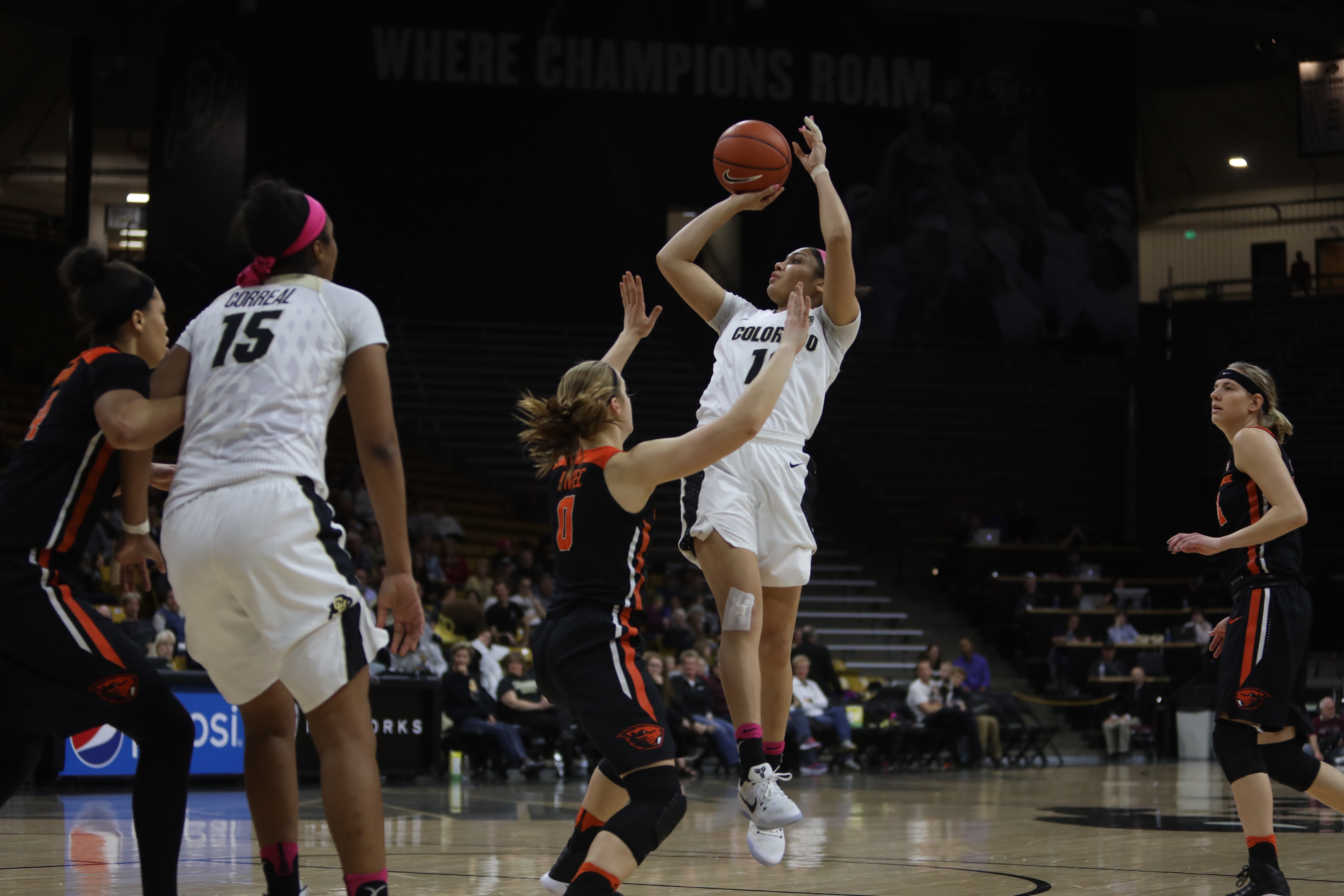 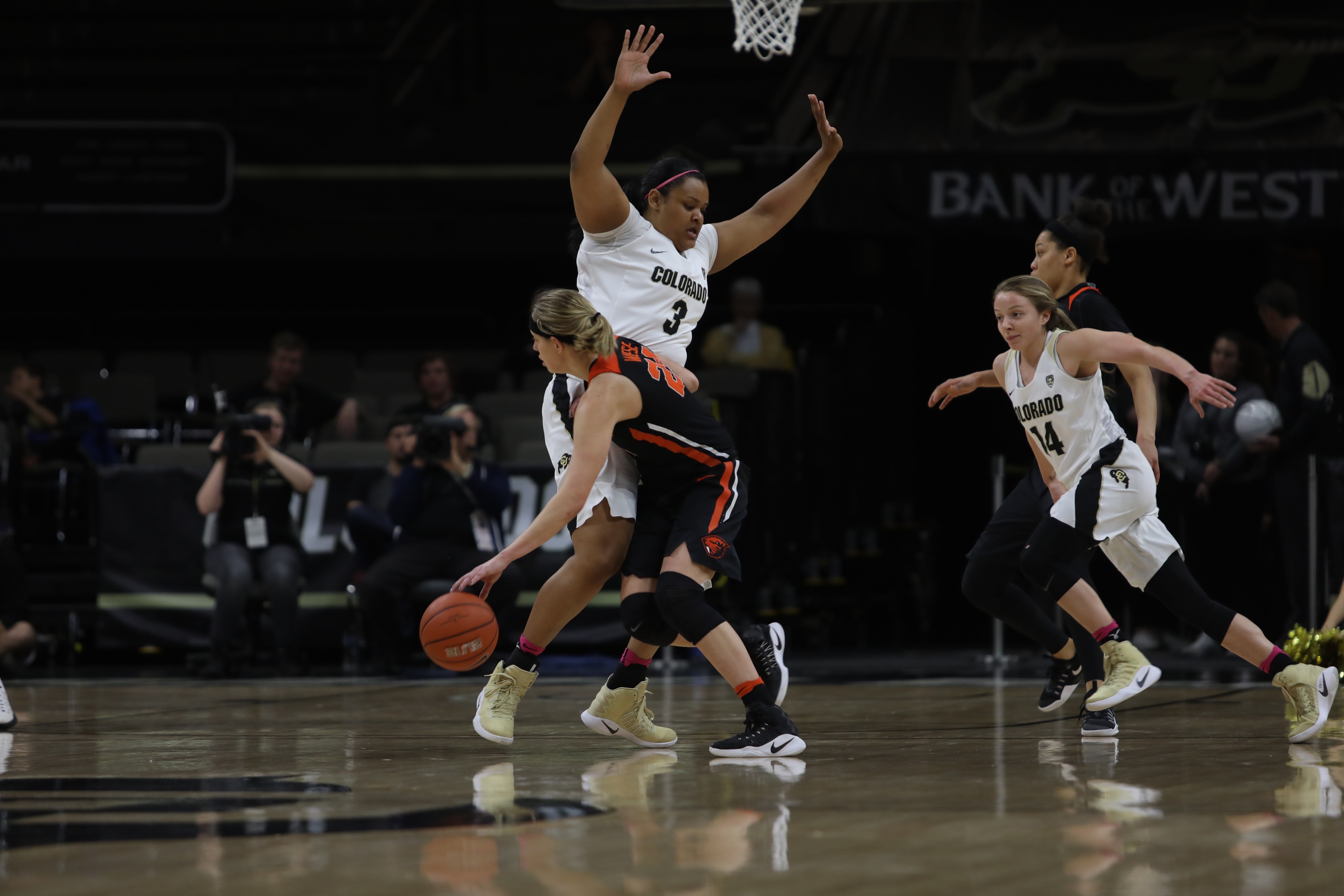 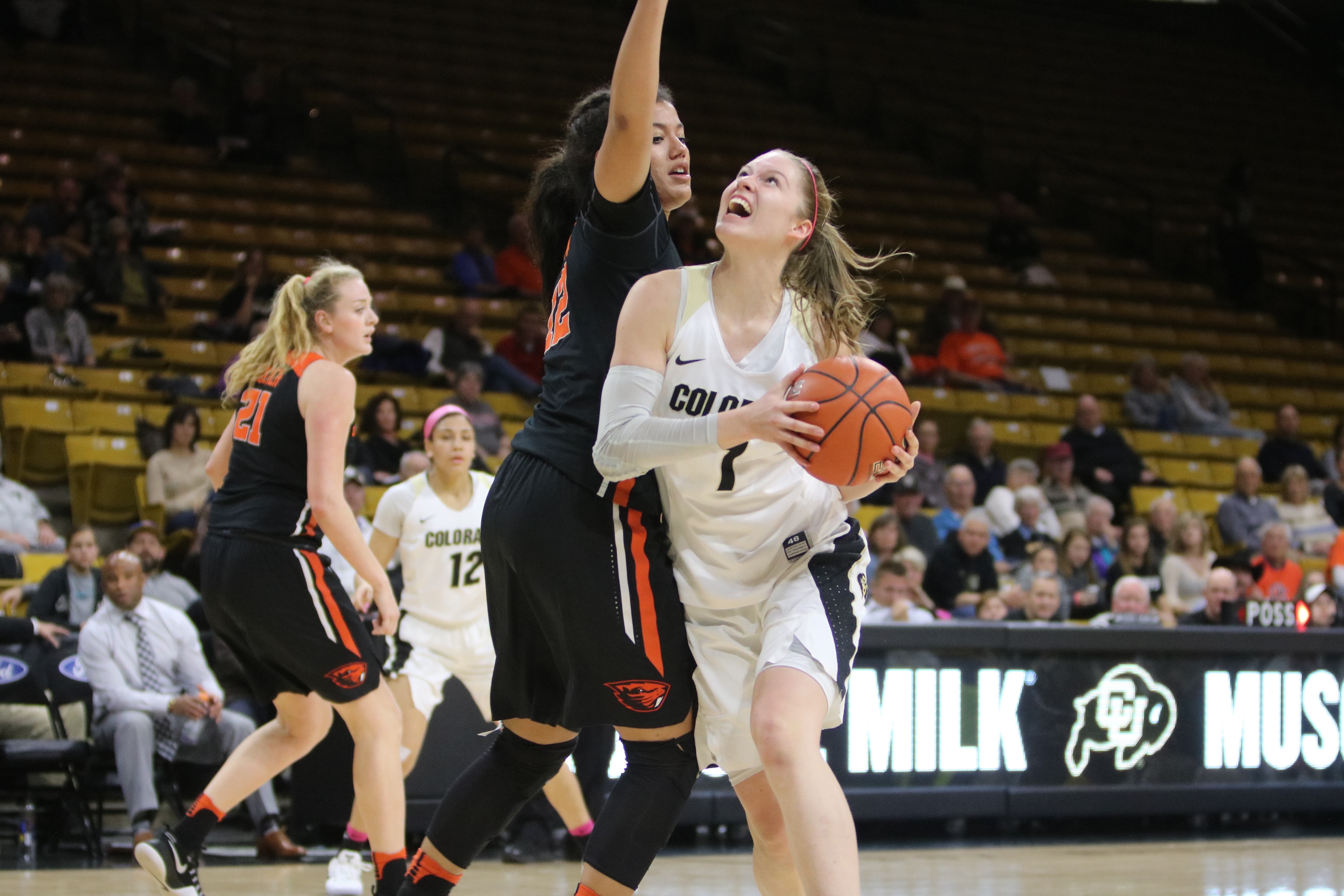